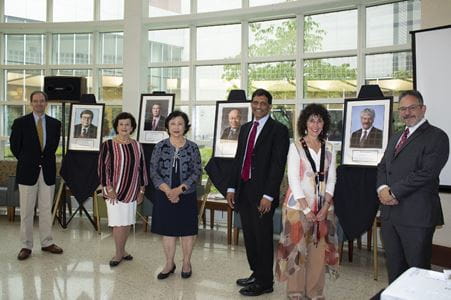 The Indiana University School of Medicine Department of Surgery Transplant Division celebrated the life and careers of four distinguished transplant leaders during its Legacy of Hope event on August 22, 2019.

The event celebrated the life and achievements of the late Drs. Stephen Leapman, Ron Filo, Larry Lumeng and Mark Pescovitz who all had a significant part in shaping the past, present, and future of the transplant surgery program at IU School of Medicine.

“I knew all of these gentlemen personally, so for me and many others this is a very warm and familiar event,” said Jonathan A. Fridell, MD, a professor of surgery, and division chief of transplant surgery

The event brought together many former and current faculty and staff, philanthropic donors and friends, as well as family members and spouses of the doctors being celebrated—providing the transplant division a chance to thank everyone for their support of the research and education mission.

“Because of all the turnover in transplant surgery we’ve had over the years many of our staff, and team members have never had the pleasure of actually meeting these surgeons,” Fridell said. “So this display will serve as a constant reminder of those who came before.”

In recognition of the doctors being celebrated, the division is displaying four plaques in commemoration of their achievements at the Organ Transplant Unit South at Indiana Health University Hospital. Fridell explained that they chose the Organ Transplant Unit South because Filo and Leapman were instrumental in moving the transplant unit there from the Richard L. Roudebush VA Medical Center to University Hospital.

“These doctors were leaders, pioneers, and they were outstanding clinicians,” Fridell said, “We looked back and discovered that even though it has been 10 to 20 years since these surgeons performed transplants, there are still more than 300 grateful patients walking around today with functioning grafts that they had performed.”

During the Legacy of Hope event on August 22, 2019, four doctors whose work helped advance the mission of the surgery department at IU School of Medicine and IU Health were recognized:

A pioneer in the field of organ transplantation whose research and passion for patient care saved thousands of lives and left a legacy of clinical excellence that continues today at Indiana University Health Transplant.

Associate Dean for Educational Affairs at IU School of Medicine, 2001- 09

An authority in renal and pancreas transplantation, with research interests in the mechanisms of pharmacologic immunosuppression.

An accomplished surgeon-scientist, he performed kidney, pancreas and liver transplants, including Indiana’s first pancreas transplant in 1988. He was internationally recognized for his research related to transplantation, dialysis access, and the immunologic processes in diabetes mellitus and its associated renal manifestations.

A distinguished physician-scientist, he was widely recognized for his seminal research in the study of fatty liver disease and the genetics of alcoholism.