Meet the James A. Madura Scholars 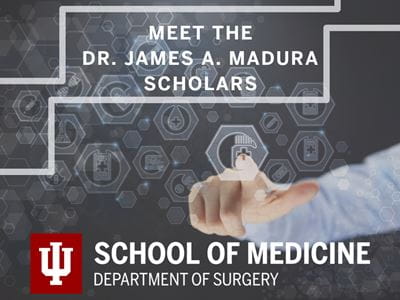 Gary L. Dunnington, MD, Chairman of the Department of Surgery at Indiana University School of Medicine, is delighted to announce that the Department of Surgery has named two James A. Madura Professorship Scholars this year—Lava Raj Timsina, MPH, PhD, and Ashley D. Meagher, MD, MPH. These appointments are made possible thanks to the generosity of others who supported the James A. Madura Professorship endowment.

The Department of Surgery’s James A. Madura Professorship is an appointment funded by a planned gift. It supports a professorship for a junior faculty member in the Department of Surgery at IU School of Medicine. Researchers who are identified as “investigators” or “scholars” will hold this professorship for a period of one to three years, at which time a new recipient will be named. The chair of the department determines the length of time for the appointment. Expenditures may be used as a salary supplement for the holder of the professorship, support for research, manuscript preparation, library and equipment acquisitions, graduate research assistance, and other requirements of an active scholar and teacher.

The James A. Madura Professorship was established as a permanent tribute to Dr. James A. Madura in 2015. It serves as a powerful tool to enhance IU School of Medicine’s tradition of groundbreaking research and clinical care by supporting exceptional junior faculty members who are doing outstanding research work in their fields. This support will help IU School of Medicine Department of Surgery retain some of our best and brightest who will continue the work Madura and others pioneered, carrying forward the legacy he and so many others have left behind.

Meagher focuses her research on health disparities for general surgery and trauma surgery, including the effect of insurance status and race on accessing rehabilitation services after acute care. Meagher has published six times and written three book chapters. Additionally, she’s given 15 presentations. Away from medicine, she loves hiking, bird watching, camping and traveling.

At the Center for Outcomes Research in Surgery, Timsina is part of a research team that works closely with surgical faculty on projects that require in-depth analysis of clinical data. His research interests are risk behaviors associated with cancer, cancer survivorship, disparities in cancer, economic burdens related to cancer and outcomes research. Timsina, who joined the faculty in March 2018, has extensive experience evaluating and analyzing data measuring hospital care, health-related risks, surgical outcomes, trauma care, cancer treatment and outcomes. He has also helped author 22 peer-reviewed articles, which have appeared in the Annals of Surgery, Health Affairs and Journal of Public Health.

About Dr. James A. Madura

Dr. Madura directed both student and resident education during his tenure at Indiana University and was named Clinical Professor of the Year by numerous graduating senior classes. He developed a strong clinical interest in pancreatic, hepatic, biliary and gastrointestinal diseases and their management. His insight into congenital duodenal anomalies in the adult and bile reflux gastritis have been presented at regional and national medical conferences.