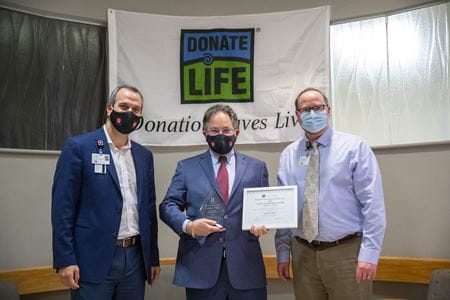 Each year, Indiana University Health presents Values Leadership Awards to compassionate and dedicated team members sustaining workplace excellence. This regional distinction is awarded to four team members and one professional team who display a commitment to community engagement, improving others' well-being, and the IU Health Way. The regional honorees are then automatically considered for the system’s top honor—a President’s Values Leadership Award (PVLA).

The 2020 Medical Staff winner for the PVLA was Indiana University School of Medicine Department of Surgery faculty member Jonathan Fridell, MD, Professor of Surgery, and Division Chief of Transplant Surgery.

In her letter of support for his nomination, Kellie Hanner, President and CEO of Indiana Donor Network, said, “As a purpose-driven leader, Dr. Fridell’s efforts go far beyond medicine into the overall well-being of those he serves. He is known across our organization for the depth of his compassion for the families of organ donors, and he goes far beyond what is expected in support of them.”

In the statement provided by Fridell's nominator for the award, Mandi Query, RN, MSN, Director of Clinical Operations said, "Dr. Fridell embodies the IU Health Value of Compassion. Whether you are a member of the team, patient, or family member, he treats everyone with respect, kindness, and empathy."

The award symbolizes that the transplant division is on the right track to succeed in the coming years and is built on a foundation of growing leadership within its team.

"This is as much a reward for all of the transplant team as it is for me personally," said Fridell. "I think that this award is honoring a culture that's developed in transplant, particularly the nursing and physician relationship, which we spent a lot of effort working on."

When Fridell arrived at IU School of Medicine, he believed leadership an innate skill. It was through the mentorship and courses of Gary L. Dunnington, MD, Chair of Department of Surgery, particularly Leaders Growing Leaders, Fridell realized leadership is a skill that requires exercise.

"When I took on my first leadership role, Dr. Dunnington specifically took me under his wing as I'm sure he does most budding leaders," said Fridell. "He met with me regularly to make sure that if I had any questions on how to manage difficult situations, not that he would solve them for me, but he would give me orientation on how to deal with them by myself and set me on a path to a self-education that has been invaluable."

Because of this leadership education, Fridell now has an extensive library of leadership books and regularly reads about leadership.

"I think the most important thing that I read about very early on is how to have a difficult conversation, because I think that so many problems that we face day to day are caused when we don't deal with issues head-on," explained Fridell.

The COVID-19 pandemic brought its own challenges, caused a shift in day-to-day operation, and made Fridell change different facets of his leadership style to serve his team and colleagues better.

"When COVID happened, we had to come together as an entire group and make decisions with the rest of the IU health leadership on what we keep on doing, what we have to slow down, and how do we get these messages out to the entire transplant team," said Fridell. "Very early on, we started having a weekly town hall.”

This weekly town hall became routine, and Fridell realized that these events would likely outlive the COVID pandemic. Fridell explained his excitement to involve the entire transplant team in these vital conversations.