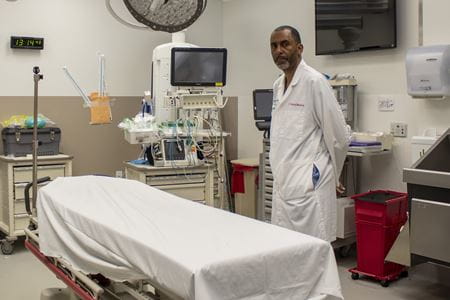 Clark J. Simons, MD, associate professor of clinical surgery with Indiana University School of Medicine Department of Surgery, was honored as one of the recipients of the Dr. Joseph T. Taylor Excellence in Diversity Award during the 30th annual Dr. Joseph T. Taylor Symposium. Simons has been acknowledged for his support for IU School of Medicine’s chapter of the Student National Medical Association, for which he serves as an adviser and has participated in many of its programs, including Dining with a Doctor. Simons helped develop the Male to Male program, which mentors aspiring minority male physicians. He has helped build a strong pool of underrepresented youth preparing for careers in the field of medicine with his discussions at high schools and aspiring medical students in the Masters in Medical Science program, as well as leading the Rawls Scholars Medicine Initiative at Sidney & Lois Eskenazi Health.

Simons has worked for several years with the Prescription for Hope and the Educating Kids about Guns prevention program at Eskenazi, which works with at-risk youth and overall violence prevention in the community.

Simons spoke recently about his recent award, and the role he hopes to play in improving diversity at IU School of Medicine.

How did you learn you were nominated?

I found out that I was nominated by Dr. Mary Guerriero Austrom, associate dean for diversity affairs at the Indiana University School of Medicine. She recommended me based on my past 19 years of being involved with many diversity events, programs, and things of that nature on campus and off campus.

What were some of the things that drove you to do work in improving diversity?

Being an African-American male, I have been lucky in terms of my success and where I’m able to go in my career. I do understand that I am one of the lucky ones. One of the things I’ve always tried to do is help others. So if there is an opportunity where I can help, or if I can inspire someone hopefully so that they succeed themselves. I’ve always tried to help others so they can be more successful than me. That’s why I think that diversity is essential.

What is something you hope that people in a similar position as you can take away from the kind of work you do? Also, why should they strive to try to bring that kind of sense of community?

So here’s an example. I have a program I run where I try to encourage aspiring medical students to network with one another, and work together. One of the things that I have expressed is that everyone in the group try to do something for someone else. I think it’s important for those in a position to give back to do so, to help others, and bring someone else up with you as they progress in the world, that is the key to diversity. If it weren’t for those who paved the way for me to get to where I am today, I wouldn’t be here.

When you mentor younger physicians, what are some of the things you want them to take away when it comes to diversity?

Now that you’re getting this award, what do you see your next steps being? What are some of the other things you hope to accomplish?

I’ve been doing many things in regards to diversity for students, but I do it not for this award. My success will hopefully be measured, later on, upon someone else’s success that I was able to inspire, and for them to do well, better than me. I’m not even close to being done yet. I’ll continue to work to improve diversity with the students, residents, colleagues and my peers. This is not the end of what I do, and I’m still evolving to become a better person, to improve diversity.

Is there anything in your past that you would say affected you, and made you more aware of the importance of diversity and how you used it as a strength?

As I mentioned, I was one of the lucky ones. I’m a second generation physician—my father is a medical doctor and my mother is a nurse. I grew up around medicine, but when I was younger, I was treated like everyone else. Sometimes I was treated differently sometimes despite my father’s and mother’s medical background. I will never forget how I was treated back then. It’s what gives me the drive and desire to succeed. I have been called the n-word before, I have gone places where security follows me, I’ve had police officers stop me, and I’ve almost been arrested because I was the wrong person, in the wrong place at the wrong time. I’ve been through all this stuff, so those are things I’ll never forget. So that’s why I think it’s very important for me to continue doing the work I do in diversity.

How do you hope that this award will help Indiana University School of Medicine continue in the efforts of Diversity?

It’s an honor to receive this award, it’s very humbling. It’s named after someone who did a lot more in their career than I have done. I’m so honored to be recognized under their name. I know the school, the department, the hospital has gotten better from when I first started 19 years ago. Some things have been put in place to make things better for other people to come through, but again we’re not where we need to be. However, we’re moving in the right direction.