Party at the BMT 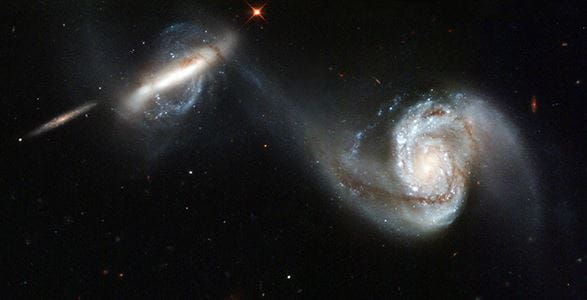 NGC 3808, Arp87. Collision of two galaxies discovered in 18th century by William Herschel that will result in their merger.

We’re having a party on the Bone Marrow Transplant unit. We called it a birthday celebration, but that name doesn’t really do it justice. It’s more of a rejuvenation, if not a re-birth. Because today is Day = 0 and my patient received her allogenic hematopoietic stem cell transplant (HSCT).

HSCTs are a big deal. They are the treatment-of-last-resort for many blood disorders that fail to respond to conventional methods. The HSCT procedure will replace the patient’s existing blood cells with an entirely new system. The patient’s disease will determine who will provide the donor cells. If the disease can be treated with very high doses of chemotherapy (which will destroy both malignant and healthy blood cells) then the patient may provide their own graft by donating cells prior to chemotherapy. This is called an autologous HSCT. However, if the disease originates in the bone marrow then you require stem cells from a healthy donor to ensure no malignant cells are given back to the patient and to allow the new immune cells to attack the ‘foreign’ tumor. Donors for such allogeneic HSCT can be family members (called MRD = Matched Related Donor) or from registries of potential donor volunteers (called MUD = Matched Unrelated Donor).

Collecting the cells is not the challenge of HSCT. Usually, there is no need to stick a needle into the donor’s bone. Rather, CD34+ stem cells are mobilized from the bone marrow into the peripheral circulation using G-CSF and collected from a vein via apheresis. The transplant itself is also anti-climactic. The stem cells, which look like a unit of pRBCs, are infused via a central line in about 20min. Flushing, fever and a metal taste are the most common side effects.

Today [Day = 0 MUD HSCT for AML], my patient does great. 30min after the last cells are infused, she’s smiling and asking “where’s the Jell-O?” Despite her pointed party hat, she treats a toast with Ensure with the same solemnity as if it were the finest Champagne. She laughs when her granddaughter pouts and asks “why does grandma get a second birthday party?” The rest of the day is spent working on a jigsaw puzzle, surrounded by family.

Beneath this upbeat demeanor, my patient hides a stiff upper lip. Weeks ago, she participated in a pre-transplant class run by nurses and case managers. She know what’s on the horizon. Over the next several days, she will become pancytopenic. Thrombocytopenia will put her at risk for bleeding. Anemia will put her at risk for cardiac ischemia and will require multiple transfusions. Neutropenia will put her at risk for infections, and she will require 4 different prophylactic antibiotics. We hope that within 2-3weeks the donor will engraft and counts will start to recover. But then an even greater risk will emerge from the new immune system. We hope the donor cells will focus their attack on the tumor [GVL= graft vs leukemia effect]. But a misdirected attack will result in GVHD (graft vs host disease), causing skin ulcers, massive diarrhea, along with liver, lung, and kidney failure. For months to years, my patient will require regular visits to adjust the immunosuppressant dose to balance the need for GVL against the danger of GVHD.

It is therefore paramount to educate patients on the nuances of HSCT. Their outcome will depend on their resilience and their ability to commit themselves to indefinite follow-up appointments and lifestyle changes. Thus, today’s party is Janus faced. On the one hand, it marks the hope for a cure of the patient’s deadly leukemia. On the other hand, it marks the beginning of a prolonged vigilance in a battle against the procedure itself. For this reason, my patient’s party is so reassuring to her BMT team. First, it signifies a positive attitude to adhere to a demanding routine. Second, it also demonstrates a deep support system that my patient may rely on in challenging times ahead.

As an aside, my BMT rotation was a special elective that I sought out given my interest in Hematology. It has allowed me to work directly with staff, fellows, and a broad team of NPs, dieticians, case managers. I have attended tumor conferences and didactic lectures aimed at fellows. This has given me a much better understanding of what to expect should I become a Heme/Onc fellow myself. I strongly urge you to seek one a special elective in a medical niche that is of interest to you. I hope that you, like me, will leave much better informed what to expect later during your training and that this may make you more confident in your decision to pursue that field. If you are interested in BMT, please contact me and I’ll be happy to set you on a path to make your own special elective.