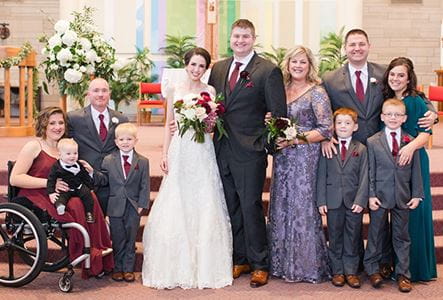 Growing up on a farm outside of Indianapolis, Weston Kitley, MD always had an interest in medicine because of the veterinary work he learned to do on his family’s animals. But when it came to choosing urology as a specialty, it was a much different reason that drew him to the field.

“My sister was in and out of the hospital a lot growing up,” Kitley said. “She had a lot of surgeries. The neurosurgeons may have saved her life, the orthopedic surgeons helped her walk a bit, but it was the urologists who really made her life worth living.”

Kitley’s sister Jessica has spina bifida, a condition where a baby’s spinal cord fails to develop or close properly while still in the womb. People with spina bifida can receive treatments for some of the different symptoms they experience, but ultimately, there is no cure.

“When she was born, she was very sick in the ICU for a long time,” Kitley said. “Growing up, there was one year we didn’t celebrate Christmas until April, because she was in the hospital for six months.”

Jessica, who is five years older than Kitley, uses a wheelchair and experienced multiple infections while growing up. But Kitley said her worst symptoms were the ones that hurt her social life.

“My sister had a lot of social issues,” Kitley said. “She went to middle school and had a really rough time.”

However, a procedure at Riley Hospital for Children at Indiana University Health brought some normalcy to Jessica’s life. Surgeons performed a urological reconstruction that stopped the urological problems she was dealing with and allowed her to be able to have children later in life.

Jessica with her two children at Kitley’s wedding in October 2018.

“Her life completely changed. She was able to be more socially normal and go to parties and have friends. She eventually was able to go to college away from home and care for herself. She got married and now has two kids.”

After growing up watching his sister’s experiences, Kitley earned his undergraduate degree from Wabash College where he played football. He then attended medical school at Indiana University School of Medicine. Now, he’s a second-year resident in the IU School of Medicine Department of Urology residency program.

“Urology is just an amazing field,” Kitley said. “Urologists do all kinds of interesting surgeries. They take care of life threatening to simple problems, but at the end of the day, people come to the urology clinic for problems they don’t want to talk about and that they have unbelievable anxiety over. It’s a very powerful social field in my opinion.”

Because of his sister, Kitley has an interest in pediatric urology, but is also interested in oncology and reconstruction. As he learns more about the different areas of urology throughout his residency, he said it’s all with one goal in mind: to help patients feel better about themselves and improve their quality of life.

“We have patients that come and can’t urinate or they’re in terrible pain when they urinate and if you’re able to perform a procedure, whether it’s simple or complex, that takes away their pain and helps them when going out into public and having a normal life, that’s so rewarding.”

Learn more about the IU School of Medicine Department of Urology residency program.