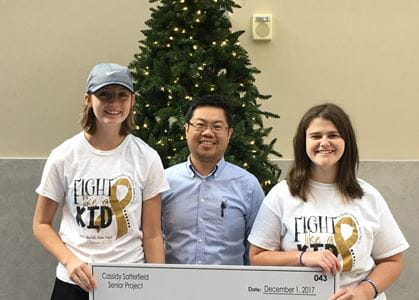 Three years ago, Cassidy “Cass” Satterfield and Alana “Cookie” Cook were introduced to one another by their hometown hero, Ali Patberg, the 2015 Indiana Miss Basketball.

At the time Cass was a freshman at Columbus North High School and Alana was in sixth grade. They bonded over their shared loved of basketball. Little did they know how much of a team they would become over the next few years.

Cass has a sensory disorder and developmental disability, and Alana has always made sure to look after her. In October 2015, Cass returned the favor. She stayed by Alana’s side when her friend was diagnosed with and underwent treatment for a rare brain tumor.

Alana was cared for by Indiana University School of Medicine faculty member Chie-Schin Shih, MD, and members of the Pediatric Neuro-Oncology Program at Riley Hospital for Children at IU Health. She endured a grueling regimen of surgery, radiation and chemotherapy. It worked. In July 2016, a scan showed that the cancer was gone.

Cass is now a senior in high school. After witnessing everything her friend went through, there was no question that she wanted part of her senior project to help others like Alana. She decided to organize a 5k fundraiser in her community this fall to honor her friend and to benefit pediatric brain cancer research.

As the manager for multiple sports teams at school, Cass easily found 85 friends to participate. The event, called Fight Like A Kid, raised $2,747.68 for research. Cass and Alana visited campus recently to present their check to Dr. Shih and others who helped Alana on her journey.

For his part, Dr. Shih is honored and grateful to receive funding for his research.

He noted that treatments for pediatric brain cancer are often inadequate. Even when physicians are able to cure children of their disease, the side effects can be devastating.

“My work has been to focus on finding specific targeted therapies for central nervous system and nerve tumors which hold the promise of being highly effective and with less side effects than the standard therapies that we have available,” he said. “I want to give children like Alana not only the hope for a cure, but the hope for a high quality of life though clinical trials.”

Through it all, Cass and Alana continue to grow closer, proving that no matter the ups and downs in the game of life, friendship is always on the winning team.

Are you grateful for the care of an IU faculty physician, want to support cutting-edge research, or hope to contribute to training the next generation of expert healers? Make a gift today to the area of IU School of Medicine that is most meaningful to you.