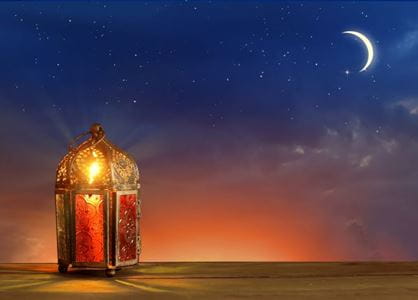 Ramadan is considered the holiest month of the year for Muslims. This month-long celebration commemorates Allah, the Arabic name for God, giving the first verses of the Quran, the Muslim holy book, to the Prophet Muhammad in the year 610 A.D. In Ramadan, Muslims fast from food and drink during the sunlit hours as a means of learning self-control, gratitude, and compassion for those less fortunate. Ramadan is a month of intense spiritual rejuvenation with a heightened focus on devotion, during which Muslims spend extra time reading the Qur’an and performing special prayers. Those unable to fast, such as pregnant or nursing women, the sick, or elderly people and children, are exempt from fasting.

The Holiday of Ramadan
Ramadan is the 9th month of the Islamic calendar, which is based on a 12-month lunar year of approximately 354 days. Because the lunar year is 11 days shorter than the solar year, each lunar month moves 11 days earlier each year. It takes 33 solar years for the lunar months to complete a full cycle and return to the same season. This year, the month long fast of Ramadan is set to begin on the evening of April 1st. During this month, Muslims fast from pre-dawn until sunset, as a means to grow in God-consciousness and moral excellence.

The Length and Purpose of Fasting
Muslims fast from pre-dawn to sunset, a fast of between 11-16 hours depending on the time of year for a period of 29-30 days. The fast of Ramadan entails forgoing food and drink, and if married, abstaining from sex during the fasting hours. For Muslims, Ramadan is a time to train themselves both physically and spiritually by avoiding any negative acts such as gossiping, backbiting, lying or arguing. Muslims welcome Ramadan as an opportunity for self-reflection, and spiritual improvement. Ramadan is also a highly social time as Muslims invite each other to breakfast together and meet for prayers at the mosque.

The ultimate goal of fasting is gaining greater God-consciousness, in Arabic, taqwa, signifying a state of constant awareness of God. From this awareness a person should gain discipline, self-restraint and a greater incentive to do good and avoid wrong. In commemoration of the revelation of the Qur’an, Muslim’s holy book, which began during the month of Ramadan, Muslims attempt to read the entire book during Ramadan and gather nightly at mosques to hold special prayers during which the entire Qur’an is recited by the end of the month.

Who Fasts
All Muslims who have reached puberty are obliged to fast. However, for people in situations where fasting would be a hardship, they are exempted from fasting. This includes anyone who is sick or traveling; women who are pregnant, nursing, or on their menses; or older people who are too weak or ill to fast. Anyone who is exempted must make up the fast later, except for those who cannot fast due to age or chronic illness. Instead, they can feed a poor person for every day of fasting they miss.

Children
While children are not required to fast until they reach puberty, it is customary for children beginning around seven years of age to perform limited or symbolic fasting such as fasting half days or on weekends. This trains them gradually and helps to engender a sense of inclusion during the month long observance. Mosques often give special recognition to children who are fasting their first full day or first Ramadan.

Family Routines
A Muslim family usually rises about 5:00 a.m. before the first of dawn and eats a modest, breakfast-like meal called suhur. After the meal, the family performs the morning prayer, and depending on the circumstances, the family goes back to bed or begins the day. Particularly during the long summer months, people often take a nap in the late afternoon after work or school. At sunset, family members break the fast with a few dates and water, and depending on the culture, other light foods such as soup, appetizers or fruit. This is referred to as iftar which means “breaking the fast.” After performing the sunset prayers, the family eats dinner. Inviting guests to break the fast or going to someone else’s house for iftar is very common in Ramadan. Many families then go to the mosque for the night prayer and a special Ramadan prayer called taraweeh. After completing their prayers, the families return home around 11:45 p.m. (All of these times vary depending on the time of year, with shorter days in the winter and longer days in the summer.)

Special Activities
Many mosques host daily community dinners where Muslims can break their fast together. This is a great service for students, the poor and anyone who desires a break from cooking. Almost all mosques also host a community dinner on the weekends.

Special Ramadan prayers called taraweeh are held in most mosques after the night prayer. During taraweeh, the prayer leader recites at least one thirtieth of the Qur’an so that by the end of the month the entire Qur’an will have been recited.

Since Ramadan is a time for Muslims to be especially charitable and fasting helps Muslims feel compassion for the hungry and less fortunate, many mosques hold food drives or fundraisers for charity during Ramadan. Many mosques also host open houses for their friends and neighbors of other faiths to join them for their fast-breaking dinner or iftar at the end of the fasting day.

The Night of Power known as Lailat al-Qadr, is believed to fall on one of the odd nights during the last ten days of Ramadan, but is most widely observed on the 27th night of Ramadan. It is considered the most blessed night in Ramadan because it is believed to be the night in which the Qu’ran was first revealed. Mosques are open all night as Muslims hold vigils in prayer, Qur’anic recitation, and contemplation.

Special Foods
Breaking the fast with dates is the only strictly traditional culinary custom associated with Ramadan. It is interesting to note the suitability of dates for this purpose as they are a concentrated source of energy and easily digestible. Different Muslim-populated countries have a variety of special dishes and desserts for Ramadan.

Eid al-Fitr
At the end of Ramadan, Muslims celebrate one of their major holidays called Eid al-Fitr or the “Festival of the Breaking of the Fast.” This year, it will begin on the evening of May 1st. Children traditionally receive new clothes, money or gifts from parents, relatives and friends. A special prayer and sermon are held the morning of Eid day, followed by a community celebration usually in a park or large hall. Food, games and presents for children are important parts of the festivities, as friends and family spend the day socializing, eating and reuniting with old acquaintances.