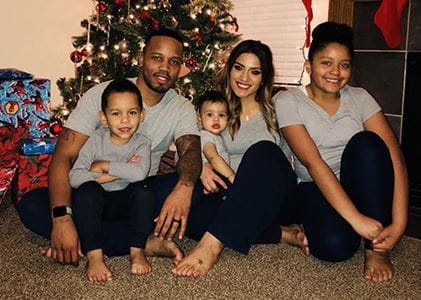 Fourth-grader Adrian Simien wanted to be a doctor when he grew up, until his teacher told him it could never happen.

“The teacher at that time basically said it couldn’t be done and it was too much for me,” Simien said, “so I never thought much about it.”

Simien, DO, now an Indiana University School of Medicine resident, grew up in Compton, California, a city known for being, as he described it, “not the friendliest place.”

“I couldn’t walk out in the street without being threatened by someone with a gun,” Simien said. “If I needed to go to the store and needed to walk down the street, I needed to take the right routes to get there safely and then it was the exact same for getting back home. It was a pretty tough area.”

Simien was used to witnessing violence growing up. As a sophomore in high school, his principal was shot and killed by a student during a riot. Soon after, Simien was able to attend different high schools through basketball scholarships. He was the first of his six older and six younger siblings to go to a different school in the area to get away from the violence.

“I pleaded with my mom to let me go to a different school. Coaches even came to the house and were like, ‘you know what? This would be a better environment for Adrian,’” Simien said. “Changing schools was an extremely difficult thing for me to do, but overall it was more beneficial than harmful for me.”

After graduating high school, Simien attended Missouri Baptist University in St. Louis on a basketball scholarship. However, family issues forced him to drop out after the first year and move back home to Compton.

Simien was homeless for several months during that time, living in his car until his girlfriend, who is now his wife, and her family offered him a place to stay. Simien started working 40-60 hours a week and taking business classes at a community college, all while trying to support his girlfriend and daughter. He earned A’s in all of his business classes and was even offered a scholarship to Cornell University. Instead, Simien turned down the scholarship and was accepted back into Missouri Baptist University to complete his undergraduate studies. It was then that he revisited the idea of attending medical school.

“I had a negative .2 GPA,” Simien said. “I had aspirations, I just didn’t know how to get there.”

Simien decided to meet with an academic counselor at Washington University in St. Louis, not knowing what her reaction would be to his low grades. The response he got changed his life.

“She basically took me in her arms and did not shy away at all,” Simien said. “She said, ‘You want to go to medical school? Okay, you need to get straight A’s in every class and if you do that, I will help you.’ So, I sent her my transcripts every semester, and they were straight A’s.”

After graduating from Missouri Baptist University, Simien was admitted to the College of Osteopathic Medicine at Des Moines University where he earned a doctor of osteopathic medicine degree. Focused on pursuing a career in general surgery, it wasn’t until the end of medical school that he learned he had a passion for women’s health.

Throughout his life, Simien said, he saw several family members experience cervical cancer, breast cancer and infertility struggles, and he wanted to do his residency in an area of medicine where he could help people with similar problems.

“I was doing a lot of research with these world-renowned surgeons and I had recommendations from general surgery. Then, I had my OB-GYN rotation toward the end of the year, and that pretty much changed everything,” Simien said. “The women we were with in clinic or in surgeries were women that resembled the women in my family.”

Simien switched to OB-GYN at the end of medical school, a big risk since it was late in the match process, but it’s one he says he will never regret.

“I wound up at Indiana University School of Medicine,” Simien said. “It’s so supportive. It’s amazing. I’m pretty much living the dream right now, compared to where I was living before.”

Now in his second year of residency, Simien said he is working on several research projects focused on reproductive endocrinology and infertility. He’s also researching breast cancer in African-American women. After completing his residency, he hopes to complete two fellowships—one in infertility and one in minimally-invasive surgery.

As for others who may experience similar struggles that he experienced throughout his life, Simien said his biggest piece of advice is to never give up.

Learn more about the IU School of Medicine Department of Obstetrics and Gynecology residency program.