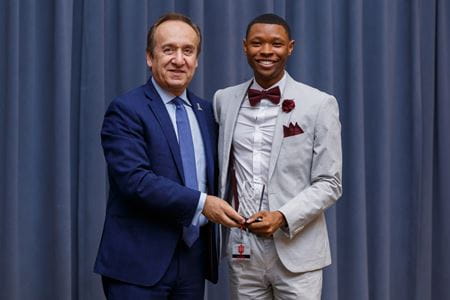 Disease can be so humbling.

Its introduction to the human body can leave even the strongest, most confident individual feeling uncertain and afraid. And that’s one of the reasons Aramis Smith wants to become a doctor.

He wants to be part of the medical teams that instill hope and confidence in the minds of the ill, he said. He wants to help, to reassure. To save lives.

When he ponders his future career, he often thinks back to the asthma attacks of his childhood that landed him in hospital beds. He recalls the kind physicians who took the time to explain to him what was happening to his body. He remembers marveling at how they knew exactly what medications would help him to breathe.

He wants to do that for others.

So, when his first attempt at applying to medical school didn’t turn out as he’d hoped, Smith didn’t give up. Instead, he enrolled in the Master of Science in Medical Science (MSMS) program at IU School of Medicine, where he was able to sure up his skills before trying at the entrance exam again.

His success in the program was recognized recently by its leaders: Smith was the first MSMS student to be recognized as part of the IUPUI Elite 50—a program that honors graduate and professional students who demonstrate excellence in and out of the classroom.

As it turns out, Smith won’t end up completing the master’s program. He doesn’t need to.

After a year of study in the two-year program, he’s been accepted into IU School of Medicine, and he’ll begin working toward his medical degree in the fall.

But he touts MSMS for its helpfulness. More than anything else, it prepared him for these next years of studying and training, he said. And along the way, he built a community of support and encouragement around himself that helped him succeed—mainly because its members understood him and his situation so deeply.

Smith isn’t sure exactly when he decided to become a doctor. There’s not one specific moment that sticks out in his memory, he said.

He’s been fascinated by the medical field for as long as he can remember. He always enjoyed science— “It’s empowering to know the reality of nature,” he said—and excelled in those classes in school. Even the television shows he enjoyed during his childhood called upon biology, chemistry and medicine, like “ER” or documentaries on the National Geographic channel.

But looking back, he knows his public high school—located about 20 miles south of Chicago—didn’t push him academically as much as he would have liked. There were no advanced placement courses, no dual-credit college classes.

So, it wasn’t until he enrolled at Eastern Illinois University and sat through his first chemistry class there that he truly appreciated the subject. He reveled in its complexities, in the worldly mysteries to which it seems to hold the keys.

It was during his time in college that he decided his career lay in medicine. When he told his parents his plans, his mother cried proudly, he said, grinning a bit with embarrassment.

He took up a biochemistry major. Every spare minute he had on campus at Eastern Illinois he devoted to participating in research. That work earned him space in the author section of several publications. During his senior year, he took the medical, dental and pharmaceutical college admissions tests.

He excelled on the pharmacy and dentistry exams; but his MCAT score wasn’t quite high enough to earn him admission. He considered sticking with pharmacy or dentistry; but he wasn’t ready to abandon his dream of becoming a doctor.

He started looking for a backup plan and discovered the Masters in Medical Science program at IU School of Medicine.

The MSMS program at IU School of Medicine helps students from disadvantaged backgrounds improve their chances of being accepted to medical school and be successful as they continue their education. The program is designed to give participants additional skill-building experience and enhance their learning strategies while also exposing them to didactic instruction and research.

Smith said he was accepted to several similar master’s degree programs, but he chose to enroll at IU because of its approach to the curriculum. Rather than turning a blind eye to the disadvantages minority students might face, it embraces them and helps students overcome them, he said.

Smith lumps himself into that demographic without any qualms.

His father is an electrician in the Chicago area. His mother, a correctional officer at a Cook County juvenile detention facility. They’re hardworking, dedicated people. But the lives they’ve built come after years of hardship stretching back generations, Smith said.

Decades ago, Smith’s family moved to Illinois as part of the Great Migration of blacks and African-Americans to the North from the post-slavery South. His lineage includes folks who lived in the projects and other government housing facilities before finally settling in the outskirts of the city.

He learned at a young age not to let the environment influence him in a negative way. Instead, like so many of his relatives before him, he worked hard to achieve his goals.

“You have to work as hard as you can and hope for an opportunity to better yourself,” Smith said.

He earned a hefty scholarship to Eastern Illinois University. He’s the first in his family to graduate from college.

Smith didn’t expect to learn as much as he did from his time in the MSMS program, he said. The program’s courses are designed to mirror those taken by first year medical students, he said, so it’s rigorous and difficult at times.

But in his classes, he found a group of friends and built a community of support, each member bringing an important set of skills to their study tables.

There was friend who was formerly a paramedic, who could offer advice about how to handle different clinical situations, Smith said. Another friend double majored in biology and chemistry in her undergrad years and had a wealth of academic knowledge to share.

To cap it all, they were diverse and inclusive, a range of skin tones and backgrounds that left no one feeling singled out.

Smith said he never once felt less than or like an outsider around his MSMS peers. He thinks that empowered him and helped him to succeed.

Now, he’s looking forward to medical school and feeling more confident about the future than he had before.

He’s not yet sure what specialty will most interest him, but he knows he’ll continue to dabble in research because he thinks doctors should always be working to better understand the best route of treatment, the best way to help.

After all, that’s all he’s ever wanted. To help.

“I want to take everything I’ve learned and help someone,” he said. “Disease is so humbling, so having someone who can help is great.”