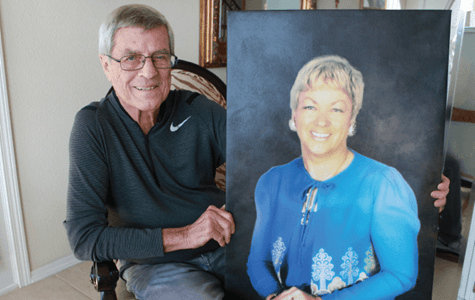 Entrepreneur Larry Sharpf lost his wife to Alzheimer’s disease.
He turned to IU School of Medicine to honor her legacy.

The first time Larry Sharpf asked his future wife, Barbara, on a date, she declined, explaining she already had plans to go fishing and throw a steak on the fire. Then she paused. “I can pick up another steak,” she offered.

His response: “Pick up another steak.”

It’s fitting that Larry and Barbara’s relationship began with something of an adventure, because their courtship and the nearly 28 years of marriage that followed would be one adventure after another.

There were a slew of fishing trips, when the couple would load up Barb’s burgundy Dodge van – customized to double as a camper – and head out to waterways in search of steelhead and salmon. There were the long days spent together on their ranch in Central Oregon, where 100 head of cattle roamed the land.

Then there was the New Year’s Eve the two entered a dance competition at the Black Buttle Resort. “We danced the jitterbug to Pink Cadillac,” Larry recalls, a smile creeping across his face. “I had a sweater on, and it was soaking wet when we were done.” Barbara had insisted they win so they could give the prize to a neighbor.

“She was something special,” Larry says. “I really miss her.”

Barbara Alderman Sharpf died on Feb. 4, 2016, after suffering from Alzheimer’s disease for more than a decade.

Shortly after Barbara passed, Larry committed to finding a meaningful way to honor his wife’s memory. A native Hoosier and graduate of the Indiana University Kelley School of Business, he chose to establish the Barbara and Larry Sharpf Professorship in Alzheimer’s Disease Research at IU School of Medicine. The endowment, which will be funded through a charitable gift annuity, will enable the School of Medicine to add to its team of experts focused on developing ways to treat, cure and prevent Alzheimer’s disease.

“It’s a hideous disease,” Larry says. “I don’t think there’s anything worse than losing your memory. I know what I went through, and I know what Barb went through. I want to prevent other people from going through this. That’s why I made this gift.”

Larry Sharpf is a self-made businessman who learned the value of hard work at a young age. He grew up cutting lawns in his hometown of Peru, Indiana. In high school, he worked long hours at his dad’s service station.

After a short stint at Purdue and some time off from college when his father became ill, he found his way to Bloomington. He married his first wife while in school, and the couple soon learned they were expecting. With $5.10 in their bank account and a family to support, Larry took a job selling pots and pans to young women for hope chests, all while working toward his degree.

His work ethic and IU education would serve him well. He went on to hold executive leadership roles at corporations such as Union Carbide, Precision Castparts, W.R. Grace and Teledyne. He was doing so well that he planned to retire at age 45 and take on some consulting work. One of his early clients was a distressed casting foundry in Albany, Oregon. Rather than recommend how to make the company profitable, he ended up buying it.

In 1983, Larry reopened the foundry under the name Selmet Inc. The company grew into a leading manufacturer of parts for the aerospace industry, with its titanium castings used on the Boeing 737, Airbus A320 and the F-35 Joint Strike Fighter. He sold Selment in 2011.

Larry met Barbara in 1986, just a few years after buying Selmet. He was recently divorced, and in her he found a partner and friend. Like Larry, Barbara was an entrepreneur. She worked as an interior decorator, sold real estate, and was in property development and management.

But her savvy and smarts were only part of what caught Larry’s attention. “She was gorgeous,” he says, with blond hair and blue eyes that sparkled. “She looked like a movie star.”

In 2006, Larry noticed something amiss with his wife. He took his concerns to their family physician.

The diagnosis of Alzheimer’s disease crushed the couple, and by 2008, Barbara had declined substantially. “We spent so much of that year crying,” Larry says. “She was losing it fast and she knew it. We could sit close together and I would hold her.”

He cared for her at home as long as possible. When she eventually had to move into a nursing home, he visited daily, refusing to leave her side in the end. “She was a fiercely independent woman, so to see her become so dependent was hard.”

Today, reminders of Barbara remain throughout the home they shared in Vancouver, Washington. There’s the artwork she thoughtfully selected as she remodeled and, nestled in the landscaping outside, a decorative turtle she hand-painted. Above a mantel in the master bedroom, there is a portrait of Barbara that Larry commissioned after her death.

But perhaps the most poignant reminder of all is more than 2,000 miles away in Indianapolis: the endowed fund that bears her name and that will ensure Alzheimer’s disease research continues until a cure is found.

It is a fitting legacy for an exceptional woman, and a promise that memories of Barbara will endure.

The Gift that Gives Back

A charitable gift annuity is a special philanthropic tool that enables you to support the program of your choice at IU School of Medicine. For more information, please contact Tim Ueber at twueber@iu.edu.