IU’s Hanna, appointed as new chair in lung cancer clinical research, says pieces starting to fit together quickly in search for a cure 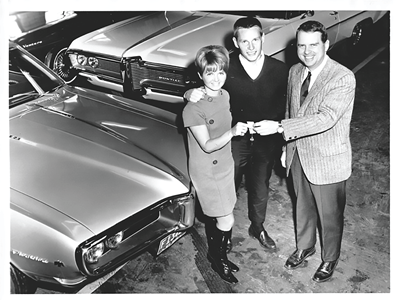 Tom Wood hands over the key to a new car

Photo: Tom Wood (right) hands over the car keys to customers at his Pontiac dealership

The jigsaw puzzle – a complex picture carved into a thousand pieces – is an overused metaphor for the pursuit of a cancer cure. But when it comes to solving lung cancer, Nasser Hanna, MD, says the image is useful in describing the current pace of progress towards a cure.

The pursuit of a cure for one of the deadliest forms of cancer has been slow and tedious. At times, a solution has seemed impossible to reach. But like sticking with a puzzle, persistence has been rewarded and the pieces are starting to fit into place.

“That’s what’s happening right now,” said Hanna, an Indiana University School of Medicine professor who’s been working on the puzzle for nearly two decades. “It’s been 50 years of forming the outer border and now we’ve sort of got that next layer. But now the successes are coming much more rapidly.”

Hanna’s efforts to solve lung cancer got a big boost recently when he was named the first holder of the Tom and Julie Wood Family Foundation Chair in Lung Cancer Clinical Research.

The endowment, created in memory of the automotive executive Tom Wood, will fund new treatments for lung cancer from conception to clinical trials. It will foster collaboration with other lung cancer researchers, encourage junior investigators to test their ideas and serve as a lever to secure additional grants.

“I can’t even begin to tell you what a game changer this is,” Hanna said. “Money is critical to do research. No matter how great of an idea you have, if you don’t have the finances to run the experiment, it doesn’t matter.”

The Wood Family Foundation’s gift follows its 2011 endowment of a chair in lung cancer research that is held by laboratory researcher John J. Turchi, PhD.

The family’s support follows their experiences during Tom Wood’s treatment for lung cancer at the IU Simon Cancer Center. Elsewhere, Wood had been given six months to live. But IU’s Larry Einhorn, MD, prescribed a series of treatments that extended Wood’s life for nearly four years.

“We believe strongly that IU is the finest place you can be treated for cancer,” said Julie Wood, Tom’s wife of 51 years. “And we hope through this research we will make it so other people won’t have to suffer the way Tom did.”

Lung cancer is a deadly form of cancer which is diagnosed less frequently than breast cancer but that kills more people annually, according to the American Cancer Society. As many as 150,000 Americans are projected to die from the disease in 2018.

As daunting as lung cancer remains, Hanna said there is new hope in therapies that spur the body’s own immune system to attack the cancer. Patients in advanced stages of the disease who once might have lived only a few months are now surviving for years.

Hanna has been deeply involved in cancer research since joining the faculty at IU School of Medicine in 2001. He helped develop new drugs for advanced lung cancers. He challenged standards of care that were ineffective, costly and difficult for patients. And his work on the frontiers of immunotherapy’s use in lung cancer has shown results so encouraging that they appear to be those elusive pieces that tumble into place at a rapid clip.

With the support of the Wood Chair, Hanna will be able to continue and expand the research into new combinations of immunotherapy drugs, as well as how they might work in tandem with chemotherapy.

“Where are we going with this?” Hanna said. “Well, we are already curing more people. And we’re going to fine tune this.”

The Wood Family Foundation is a strong ally in that effort.

Tom Wood, whose name is well known to car buyers, was a Michigan native, graduate of Western Michigan University and a veteran of the United States Army.

He began as a used car salesman in Michigan before buying a new car dealership in Indianapolis, where his business grew. In addition to his business success, Wood was recognized by TIME Magazine for his community and philanthropic work, including his support of the Indiana Children’s Wish Fund.

But in 2006, Wood was diagnosed with Stage 4 lung cancer. Initially, a doctor told him there was nothing more to be done but keep him comfortable. At IU, however, Einhorn told the family he believed Wood was strong enough to fight the disease. Research provided options – and hope – for Wood and his family.

Einhorn saw Tom Wood’s courage in fighting the disease. And he says the Wood Family Foundation’s support for cancer research will help continue that fight.

“A lot of the things we’ve been able to accomplish – and will accomplish in the future – would have been impossible without the generous support of this wonderful family,” Einhorn said.