IU researcher has reason to dance 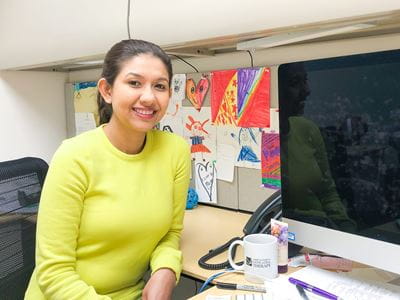 Naro Biswas, PhD, sits in her office at the Herman B Wells Center for Pediatric Research.

Days in the lab, nights in the studio. That’s the new normal for Naro Biswas, PhD. But in March, she’ll have a whole new routine— one she’ll perform on the dance floor.

Biswas, an Indiana University School of Medicine researcher, will represent the Herman B Wells Center for Pediatric Research at the annual Reason to Dance, Reason for Hope event benefitting Riley Children’s Foundation.

Reason to Dance, Reason for Hope is a ballroom dancing competition that is modeled after the television show “Dancing with the Stars.” At the event, Biswas—who has not had any previous ballroom experience—and her dance partner, local professional Scott Shook, will compete with teams of local celebrities and professionals for one of several awards, including a Riley Children’s Choice Award voted on by Riley kids.

A reason to dance

Biswas conducts her research in the Gene and Cell Therapy Program at the Wells Center, launched in May 2018. She said that in her time at IU, the support and partnership between Riley Children’s Hospital at IU Health and Indiana University has been especially inspiring. But her reason to dance is more personal than that.

“My daughter motivates me to strive harder to find therapies for childhood illnesses,” Biswas said.

Her daughter, 5-year-old Anya, is an especially talented artist. Her illustrations line Biswas’ desk, and Biswas said that she has recently taken an interest in origami.

“When I think about how creative she is and how much learning and growing lies ahead, it feels unfair that many children right across the street (at Riley Hospital) don’t get the time to just be kids,” Biswas said. “When I learned that I could do more, I knew that I had to.”

A reason for hope

But according to Biswas, research is a silver lining that offers hope to the many children and families who face pediatric disease. Diseases such as hemophilia, which affects millions around the world and has no cure.

Biswas’ research focuses on developing improved therapies that target this disease. Although there is a treatment option for people with hemophilia, nearly one-third of patients with the disease develop an immune response to therapy, leaving treatment ineffective. Biswas hopes to change that.

She is working on therapies that induce tolerance to the current treatment for hemophilia, known as clotting factor replacement therapy. To do this, she reengineers T cells to target the immune response to therapy without compromising the rest of the immune system. So far, she has seen success in laboratory models—success that has gained recognition and support by the National Hemophilia Foundation.

Biswas in the ballroom

Working so closely with a children’s hospital and its patients inspires passion in researchers at the Wells Center, said Biswas. On particularly tough days, many investigators are motivated to get back into their labs to pursue answers that will help sick children.

But on March 8, Biswas will step out of her lab, into her dancing shoes and bust a move for a worthy cause.