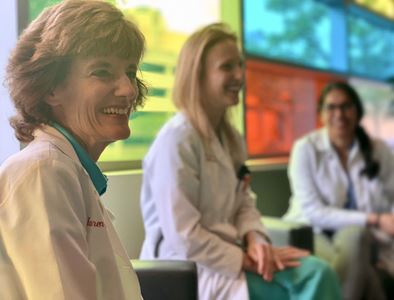 If you walk past her office, you won’t just find an open door but an open heart as well.

As the first Endowed Professor in the Department of Neurology at Indiana University School of Medicine, Karen Roos, MD has never been one to shy away from obstacles or allow any challenges to prevent her from being a strong advocate for the young people entrusted to her. In fact, she would argue that the challenges she’s faced have instilled in her an eagerness and strength to see others accomplish their goals.

“Our best and worst life experiences define how we think and approach life,” she said.

Growing up in Minnesota, Roos learned to appreciate how the sun would shine even on the coldest of days. From being one of five children and entering college at 16 to finishing medical school and being a trailblazer for women in medicine, Roos has taken the tools she’s earned along the way to prove that during the darkest and most difficult of times, there’s still sunshine for the taking.

Roos’ life is one of survival, and the evidence is written in her stories. During her undergraduate years at the University of Pittsburgh, she was working in a microbiology lab when she accidentally infected herself with a bacteria that kept her in the hospital for weeks, during which time she had to be fed through a central line. However, amid this difficult experience, Roos was adamant not to let it get in the way of her dream of attending medical school. Her classmates brought her notes, so that she could keep up with her coursework. Her professors brought her exams.

“I knew I wanted to go to medical school on time and I certainly wasn’t going to let some infection knock me off my path,” Roos stated.

With a bit of ingenuity, her dad helped make taking the MCAT a possibility by working with test organizers to arrange for her to take the exam while in hospital. The nurses moved her into a private room, a test proctor arrived and, for the first time in weeks, she had (somewhat) solid food: red Jello. While she hasn’t eaten red Jello since that day, Roos did pass her test.

One of the lucky ones

Another life altering experience at the University of Pittsburgh happened on a lovely, blue-skied day in January, 1977, when Roos was walking to physiology class with her friend, Patti. Roos was wearing the Christmas present her mom had carefully chosen for her: a new winter coat, and Patti was newly engaged. The two of them were joyfully making plans for the weeks ahead. Suddenly, shortly after class began, a powerful explosion leveled the classroom. Before Roos knew what had happened, a classmate, who was also a Vietnam veteran, had thrown her to the floor and saved her life. The room was dark with rubble and smoke, and the only door they knew to get in and out of the classroom was engulfed in flames.

From the side of the room, her professor had found a way out and said, “Follow my voice.” Roos said she remembers lying among rows of gurneys with her classmates in the emergency room, thinking about the bravery of the man who had the thought to throw her to the floor, and the professor who found a way out for all the students. But what Roos remembers most was that after the explosion she couldn’t find Patti. While Roos walked away with only a minor injury to her head, Patti was one of two people who died that day.

“Everything felt mundane after that,” Roos said. “It’s hard to just go forward after a day like that one. But I’ve learned to go on, and now often on a beautiful day I think of Patti and the joy of friendship. It’s a good reminder to be grateful for each day.”

After earning her medical degree and completing residency at University of Virginia, Roos and her family found their way to Indiana. But on May 19, 1999, after returning from working on a meningitis research project in Munich, Roos collapsed and ended up in the the intensive care unit (ICU) with a gastrointestinal (GI) bleed from a gastric sarcoma. What she remembers most about that day is her daughters standing outside her hospital room and not being able to hold them. With blood transfusions in both arms, Roos was determined to survive for her young children. Eventually, she was diagnosed with a malignant tumor and had to undergo procedures and countless computed tomography (CT) scans.

“I have so much empathy for those patients waiting for their CT results. It is an incredibly difficult time not knowing what news you’ll get,” Roos said. “To this day, when I walk past the CT waiting room, I often go in and ask the patients how they are doing and if there is anything I can get for them. I am always ready to sit for a little while with a patient who needs someone to talk to because medicine doesn’t always come in a pill, often it shows up in a person who’s just willing to listen.”

To this day, one of Roos’ friends who moved out of state, always remembers the significance of May 19th and sends a birthday note every year to mark the day.

At the end of 2017, Roos received word that her mother had collapsed and, after going to the hospital, was diagnosed with metastatic cancer. As the news caused an avalanche of emotion, Roos held onto the tradition that she and her mother always kept: rising early in the morning and bonding over a cup of coffee. It was always a great time to talk and learn from one another.

During her mother’s final weeks, Roos would wake up at 5 in the morning, put on a pot of coffee and sit by her mom, waiting for her to wake up. Roos would bring the coffee to the bedroom so they could still maintain their endearing tradition.

“I really got to know my mom as she was dying,” Roos recalled. “I was able to really learn more about who she was as a person, as well as all the things she’d cherished most in her life. She was as spunky as they come and selflessly devoted to her family. As she was running out of time, she kept asking me to promise her that I would ‘forget the bad times in my life.’ I told her I would because with every one of them, I had good memories as well and it was the good memories I would hold onto. I read to my mom as I watched the snow fall from the window behind her and then as the spring rain came. My mom had the most beautiful big blue eyes. Shortly before my mother died, my own granddaughter was born; she has my mom’s big blue eyes.”

In her own words

According to Roos, all of the trying times she has experienced—from life-threatening injury and illness to the death of her loved ones—casts an every brightening spotlight on what’s important in her life.

“All of these difficult experiences make what I’m doing really precious. While I can’t negate the challenging things I’ve encountered, I’ve realized how important it is to see that everything interconnects,” Roos said. “From my experience in the explosion at Pitt and my gastric sarcoma to caring for my dying mother, it all has gotten me to this point in my life where I’m able to use those experiences to relate to my patients and my residents.

For Roos, helping to steer those residents toward their futures as healers has provided the same sense of joy and fulfillment she has felt as a mother to her children—one she hopes to continuing reveling in for many years to come.

“When I spend the day with my residents, I go home happy. I love being able to see them grow from young, scared trainees to competent, senior residents. It’s a privilege to share this time in their lives with them,” Roos said. “From everything I’ve gone through, I’ve learned most from listening to the life that surrounds me and cherishing these days. I often tell my residents, and my daughters, I wish time would slow down. I hope I have many more days and years with them.”

Learn how IU School of Medicine is leading the way toward a more personalized approach toward health care and how Roos’ residents are learning that approach first-hand in the Adult Neurology Residency program.