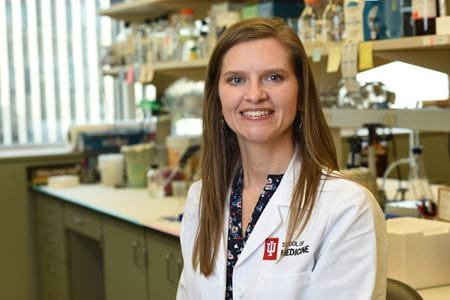 Melissa Fishel, PhD, in her laboratory

Melissa Fishel’s father didn’t see his daughter graduate from college. He didn’t walk her down the aisle at her wedding. He never held her children.

But his absence over the years has been a driving force in her life and career. Because after the disease in her dad’s body surrounded his heart and took his life, Fishel, at 9 years old, vowed to cure cancer.

Now an assistant professor of pediatrics and cancer researcher at Indiana University School of Medicine, Fishel, PhD, said that her naivety as a child is almost laughable. After all, a single drug that could cure all cancer is not possible. Cancer cells are aggressive, resilient and often unpredictable.

But that hasn’t stopped her from trying to find ways to overcome them.

Another diagnosis, another loss

Fishel’s journey toward a career in science started when she was an undergraduate student at the University of Dayton. During that time, she began to transform her passion into talent in biochemistry, and she formed lifelong friendships along the way.

“When I went off to college, I didn’t choose a roommate, and I was paired with a girl from New York. I thought she would be some fashionista and I was this country bumpkin,” laughed Fishel, who was born and raised in Indiana. “It wasn’t that way at all. We were the best of friends … but junior year, she was diagnosed with liver cancer.”

Another devastating diagnosis led to another untimely loss—a loss Fishel said motivated her to work hard in graduate school, something her friend would never get the chance to do. After losing two influential people in her young life, Fishel said the experience strengthened her faith in God and reinforced her passion for cancer research.

So she got to work.

Nationally recognized for her research in pancreatic cancer, Fishel’s laboratory is interested in understanding how tumors can survive in the presence of stressors by investigating the cancer-driving signaling pathways that contribute to survival.

She and her team have developed spherical 3D tumor models to test different combination therapies. These models are created from patient samples and more closely resemble the structure of real tumors than traditional, single-layer cell cultures.

“When you test a drug on a single layer of cells, the majority will die because they’re all exposed to the drug. But a 3D model is more lifelike. A drug may not penetrate all the cells, leaving pockets in the tumor that are different—not only in terms of dead or alive, but other environmental conditions are affected, like sugars, nutrients or oxygen,” Fishel said.

Despite how quickly cancer research is progressing, Fishel said that it’s difficult to know how certain tumors will respond to treatment when they are inside a human body. To address that, the 3D models that she and her team have created replicate some of the challenges that physicians encounter in a clinical environment, such as longer growth periods and drug resistance.

When the first treatment is effective but the second treatment fails, Fishel said her team is able to narrow down possible alternative treatment methods and improve the odds for future clinical success.

“As researchers, we don’t always find the right combination of treatments right away. But we always learn something. That’s important because the more accurate we can make our model systems, the faster new treatments can move from the lab to real patients,” Fishel said.

A life of purpose

Recently promoted within the Department of Pediatrics, Fishel works to juggle three of her most important roles—investigator, mom and follower of Christ.

When she’s not in the laboratory, Fishel can be found chauffeuring her daughter, Lanie, to a gymnastics meet. Or cheering at a basketball game of the foreign exchange student her family is hosting, Leonie. Or running lines with her son, Micah, who has landed a role in a play this spring. She and her family also host a weekly group in their home, called Life Together, which fosters authentic community.

Fishel and her husband, Nick, depend on each other to share responsibilities and bring balance to the busy schedules of their home life—another reminder that some families are not as fortunate.

Looking back at her own childhood in a single-parent home, and reflecting on the might-have-beens for those lost to cancer, Fishel asserted that she lives her life at work and at home with the same sense of inspired purpose she found as a grieving 9-year-old.

“I was nine when my dad died and my sister was seven. Having my own family has opened my eyes to my mom and how hard she worked to raise two kids alone,” Fishel said. “My experiences have been really tough, but my calling is fueled by my faith and I know that I’ll see my dad again. Until then, I don’t want to have to watch another mom lose a child to cancer, or another child to face the fear of losing a parent too soon.”

Melissa Fishel, PhD, is a tumor cell biologist and cancer researcher at Indiana University School of Medicine. She is an assistant professor of medicine in the Department of Pediatrics and conducts research within the Indiana University Melvin and Bren Simon Cancer Center and the Herman B Wells Center for Pediatric Research.