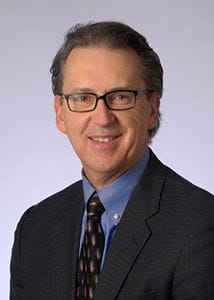 A simple screening may save your life. That’s why cancer specialists encourage people to consider screening for colorectal cancer. And there is no time like the present, especially since March is National Colorectal Cancer Awareness Month.

According to the National Cancer Institute, the number of new colorectal cancer cases and deaths is declining, except in adults younger than 55 years. In the United States, colorectal cancer remains the second leading cause of cancer-related deaths in men and women. The NCI estimated last year there were 140,250 new cases of colon cancer and 50,630 deaths caused by the disease.

We asked Douglas Rex, MD, a Distinguished Professor of Medicine at Indiana University School of Medicine and a researcher at the IU Simon Cancer Center, about the disease and screening options. Rex is a leading authority on colorectal cancer screening and colonoscopy.

As you know, the American Cancer Society changed its recommended age of first screenings from 50 to 45 for people of average risk, while other organizations continue to recommend age 50. What age do you recommend people begin screening for colorectal cancer?

Several societies have recommended beginning colorectal cancer screening at age 45 in African-Americans, but the American Cancer Society is the only organization to recommend screening at age 45 for everyone. This recommendation has proven very controversial, partly because it is based on modeling studies, partly because it will be very costly to add more than 20 million people aged 45 to 49 to the screening rolls and partly because about 40 percent of the eligible population over age 50 has not yet been screened. Many believe that resources should be applied primarily to the group ages 50 and older where the yield of screening is higher. The bottom line is that if you are 45 to 49 years old, your insurance may or may not cover screening. If you are interested in pursuing screening, the first step would be to determine if it is covered by your insurance.

Do we know why we’re seeing increased cases of the disease among younger adults?

The proportion of colorectal cancers occurring in people under age 50 has increased in the past couple of decades from about 7 percent to about 13 percent. Right now, the cause of this increase remains unknown. The increase cannot be ascribed to changes in genetics, obesity or cigarette smoking, although all of these are risk factors for colorectal cancer. It’s possible that it is related to changes in the types of bacteria in the bowel (the gut microbiome), perhaps resulting from changes in diet over the last several decades, but this and many other potential causes remain under investigation.

Average-risk means that you are age 50 or older and do not have an important family history of colon cancer. An important family history is a first-degree relative (parent or sibling) diagnosed with colorectal cancer or an advanced adenoma before age 60, or two or more first-degree relatives diagnosed at any age with colorectal cancer or advanced adenomas. Most people have no idea whether their relatives’ polyps are advanced, and it requires viewing the actual colonoscopy and pathology report for you or your doctor to sort that out. Beyond that, cigarette smoking, obesity, diabetes, metabolic syndrome and a sedentary lifestyle are all risk factors.

What about signs and symptoms? Are there any telltale warning signs?

By far, the most important symptom is rectal bleeding. Other forms of bleeding, such as iron deficiency anemia, black tarry stools (containing blood) with a negative upper endoscopy and a positive stool test for blood are also important predictors. Other bowel symptoms, such as change in bowel habit, constipation, diarrhea and abdominal pain have almost no predictive value provided there is no evidence of bleeding.

Is there anything a person can do to decrease his or her chances of developing colorectal cancer?

The most important step is to undergo screening. After that, don’t smoke, maintain a healthy body weight and exercise regularly. There is some value to regular use of aspirin or non-steroidal anti-inflammatory drugs (NSAIDs) and keeping a normal vitamin D level.

Studies show that colorectal screening does indeed save lives. What are the various screening options?

Is one option better than another?

In reality, only three tests are getting significant use: colonoscopy, annual FIT and Cologuard. Of these, colonoscopy is the most effective and colonoscopy and FIT are the most cost-effective. Cologuard is by far the best advertised, but most of the benefits of Cologuard come from the FIT that is included in the test. The DNA assays add a lot of cost, increase the false-positive rate and generally make it unclear whether Cologuard is worth the cost of $600 compared to $22 for FIT.

The main problem with colonoscopy is that it is operator-dependent. Doctors are required to measure their adenoma detection rate when performing colonoscopies. When colonoscopy is performed by someone with a track record of careful, detailed examination, then no other test comes close to colonoscopy’s performance.

Studies also show that many people don’t undergo colonoscopy for a variety of reasons, not the least of which is the unpleasant prep that one must do before the procedure. What tips do you have for people to make the preparation better?

If you are a healthy person with relatively normal bowel movements, you should be able to get an excellent preparation with one of the lower volume preps. Regardless of the type of prep, half of it should be taken the night before colonoscopy and half of it on the morning of the procedure. Using menthol lozenges before and during the prep can improve tolerability and if you have a tendency to become nauseated with the prep, ask your doctor for an anti-nausea prescription to use during preparation.

You’re working to improve the taste of the bowel cleansing prep for colonoscopy with such flavors as vanilla and strawberry-banana shakes and lemon, white chocolate and coconut food bars. From a phase II study, you reported that the shakes and food bars were just as successful at cleansing the bowel as the current prep methods, not to mention that people preferred the taste. What’s the status of this study? As you look into your crystal ball, when do you think these will be offered to people as an option for colonoscopy prep?

The next two improvements in tolerability of bowel preparations are going to be a new sodium sulfate based pill preparation and the food based prep that you mentioned. The phase III study for the food prep has not yet been initiated, however.