Mentoring makes the Match: Student reflects on achievements at IU School of Medicine 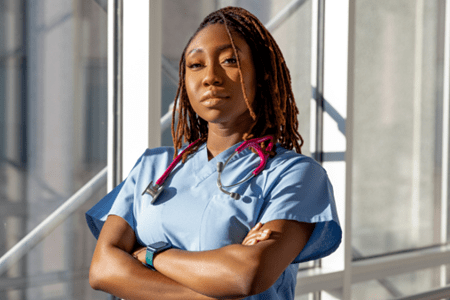 Areisa Peters grew up in a family who encouraged her love of science and medicine every step of the way.

In high school, when Peters wanted to start an initiative called “Shontelle’s Science Center,” she and her mom bought all the supplies needed including petri dishes, graduated cylinders, baking soda and a lab coat. They trekked up to Camp Wagner, a summer camp in Michigan, lab materials in tow, and Peters led experiments for Black and brown students interested in science.

“I really wanted to teach them that science can be cool. You can learn, and grow, and it’s exciting to discover new things through science,” Peters said. “You can be all the things you like about yourself as a little Black girl or boy and still be a scientist, if you want. No limitations.”

Now, Peters, a first-generation medical student, is approaching her own career milestone and will graduate with her doctorate in medicine from Indiana University School of Medicine. Today, she celebrates matching into OB-GYN at the University of Florida, which has one of the top 50 programs in the nation.

Match Day is a national celebration during which more than 35,000 graduate medical students located across the country find out simultaneously where they “matched” for residency. It is one of the most important milestones in the medical school experience.

While completing her residency, Peters will continue toward her goal of helping underserved and marginalized communities. She’s especially excited to treat Black women, a population that face significantly higher rates of pregnancy-related deaths, and other sexual and reproductive health disparities.

“I remember being part of my first delivery and crying as this little life came into the world,” Peters said. “That confirmed OB-GYN was the specialty for me. I’m very passionate about women’s sexual and reproductive health and patient advocacy.”

“I remember collecting and researching daphnia in the lake water with my PI, and I really gave serious thought to the idea that I could do this. I could be a researcher or a doctor,” Peters said.

Fostering her growing love of science, in middle school Peters’ mother encouraged her to apply for Camp MD, an opportunity hosted by IU School of Medicine that exposes middle and high school students to careers in medicine.

After high school, Peters attended Oakwood University, a historically Black college and university (HBCU) in Alabama that is fifth in the country for graduating highly qualified Black students entering medical school. Adding to her rigorous scientific studies at Oakwood, Peters was involved in vocal performance and participated in a gospel choir and led praise teams. In 2016, she earned a Bachelor of Science in biology with a minor in chemistry.

When Peters was admitted to IU School of Medicine, she felt like she was returning home, especially after the summer opportunities she pursued in high school.

“It just felt familiar to me,” Peters said. “I had walked through the halls and shadowed doctors here.”

Some of Peters favorite memories from medical school include participating in community service through the Indiana University Student Outreach Clinic, where she helped with the mobile mammogram unit and feminine and sanitary product distribution.

She also served as vice president of the Obstetrics and Gynecology Student Interest Group (SIG) in 2018 and initiated the IU School of Medicine Holiday Bra Drive. To date, volunteers leading that initiative have donated more than 200 bras to support low-income women in Indianapolis.

In addition to her volunteer work, Peters served as a clinical research assistant at Johns Hopkins School of Nursing and held a variety of leadership positions at IU School of Medicine including as Chapter Vice President for the Indiana University Student National Medical Association (SNMA) Chapter.

Despite her significant involvement, Peters remembers that during the first year of medical school she felt like a little fish in a big pond, especially after knowing many people in college. She likened medical school to drinking out of a fire hose.

“Looking back, I thought I was just going to learn about the human body,” Peters said. I didn’t realize I would learn so much about myself.”

Peters has grown significantly over the past five years, having earned a Master of Public Health from Johns Hopkins Bloomberg School of Public Health in addition to her doctorate in medicine. She credits one of her mentors, dean of IU School of Medicine Jay L. Hess, MD, PhD, MHSA, with instilling confidence that she could do both.

“When I found out Dean Hess was my volunteer faculty advisor I was so scared,” Peters remembered. “But he made it easy. He took all four of his mentees out for dinner and encouraged an individual relationship.”

Hess provided critical advice to Peters as she progressed through medical school, particularly when she experienced an academically challenging time.

“Some of the best advice Dean Hess gave me was that the ones who fail are those that don’t ask for help,” Peters said.

“It has been a tremendous privilege to serve as a mentor for Areisa,” Hess said. “She will be a caring, empathetic physician committed to improving women’s health and well-being. I will be watching her career with great interest and can’t wait to see the impact of her work.”

Peters is thankful for the mentoring she received during her time at IU School of Medicine from Hess and other faculty, particularly as a first-generation medical student. Another support system built into IU School of Medicine’s education includes lead advisors, who serve as a medical students’ primary advising contact. Kelly Matthews, MSEd, served as Peters’ lead advisor throughout medical school, providing guidance during each step of her education.

“Areisa has such a kind heart and a passion for women’s health care,” Matthews said. “She will undoubtedly go the extra mile to advocate for her patients and provide them with exceptional care.”

In addition to Hess and Matthews, Peters met one of her mentors, Amy Johnson, DO, assistant professor of clinical medicine, in her second year during foundations of clinical practice. She approached Johnson after class to ask if she would be willing to mentor her. Since then, they meet regularly for updates and speak frequently, including during the year Peters completed her graduate degree at Johns Hopkins.

“Areisa will be an incredible doctor because of her passion to care for people, to understand their stories and her continued pursuit to learn how to better care for the patient in front of her,” Johnson said.

During her time at IU School of Medicine, Peters’ many achievements will undoubtedly help her to make strides toward improving maternal and infant health. Her journey also exemplifies the advice Hess provided – to reach out and lean on support systems along the way.

“I’ve learned lessons about perseverance, about teamwork and about being prepared,” Peters said, reflecting on her experience at IU School of Medicine. “My number one piece of advice for first generation medical students is to reach out, tap into your network, and don’t be afraid.”

Areisa Peters shares how her physician mentor, Dean Jay Hess, has made a significant difference in her medical school journey.

Elite swimmer motivated by medical setbacks to pursue career as healer
Get ready for Match Day 2021!