When to start pushing: new study could change when women push during labor 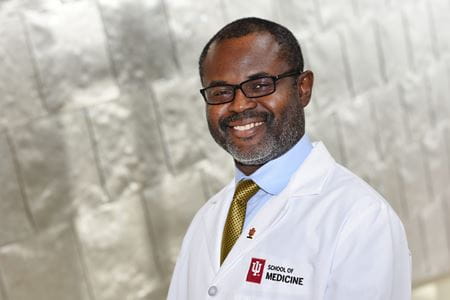 New research co-authored by an Indiana University School of Medicine faculty member could change the way women give birth.

“The big question has been when a woman is in labor and the cervix is fully open, which is 10 centimeters, should the woman start pushing immediately to try to deliver the baby or should they wait for the baby’s head to come down before they start pushing?” said Methodius Tuuli, MD, MPH, professor of obstetrics and gynecology, vice chair of obstetrics and director of perinatal research at IU School of Medicine Department of Obstetrics and Gynecology.

Tuuli joined IU School of Medicine in August 2018. He was previously a faculty member at Washington University in St. Louis where he co-authored a National Institute of Health-funded study focused on when women in labor should begin pushing.

“The overarching challenge is that although pregnancy, labor and delivery is a very common process and physicians and other providers have been managing pregnancy and delivery for centuries, many aspects of how we manage labor and how we help women labor and deliver do not have evidence that tells us what to do.”

Tuuli and the other authors, who are from several different institutions across the country, decided to study whether it’s best for women to begin pushing once they are fully dilated or to wait longer. Tuuli says when women give birth naturally and do not have an epidural, their bodies naturally start to push once they are fully dilated. For women who do have an epidural or some sort of pain management, they don’t feel as much, so they have to be coached on when to begin pushing.

“Some studies have been done in the past, but many of them have been small studies and the way labor and delivery was managed at that time is quite different than how it is managed today,” said Tuuli. “So the question became, ‘Is delayed pushing or immediate pushing better for women in terms of spontaneous vaginal delivery rate, in terms of complications to the mother and in terms of baby complications?’”

More than 2,400 women participated, making it the largest trial on labor management in this field to date. All of the women were giving birth for the first time and they were located at six different hospitals across the country, including academic and community hospitals. The women were randomly assigned based on whether they had an epidural to either push immediately when they were fully dilated or wait for one hour. The researchers then followed the women to see how many delivered naturally, how many needed another intervention to deliver and how many needed a cesarean section.

“We found no differences in the rate of spontaneous, or natural, vaginal delivery rates in the two groups,” said Tuuli.

However, the women who delayed pushing experienced more complications, including infections in the uterus and postpartum hemorrhages. Their babies also had a higher rates of suspected sepsis (blood infection) and acidemia (increased acidity in the blood), which could lead to long-term problems with how the brain and other organs develop.

“We looked at the data by the different centers and it was the same,” said Tuuli. “We looked at it with obese women or normal weight women and whether the baby’s head was really high or low when the cervix was dilated. We looked at it whichever way and in all the groups, it appeared there was no difference in vaginal delivery, and yet we had these bad things happen with the delayed pushing group.”

Tuuli says based on these findings, he suggests women begin pushing immediately when they are fully dilated, whether they have an epidural or not.

“Nature has so much to teach us. When we did not have pain control, that’s what women did in the first place, so our data would suggest that even with pain control, we should mimic what nature did, rather than delay.”

The team will follow the women who participated in the trial for several years to study any long-term complications or changes.

“We are collecting data on maternal pelvic floor support and symptoms of bowel and bladder control over three years,” said Tuuli. “I think that is a really important component to all of this. We can take the data on the labor outcomes and the data on the long-term outcomes, and that should help us answer more questions and guide patients and clinicians on what to do to optimize the health of the woman.”

Read more about the team’s findings in a recently published paper on JAMA Network.