Tyler Trent on the importance of research 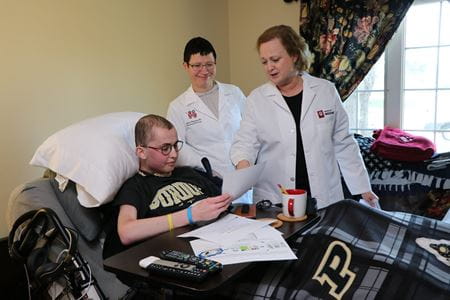 When Purdue University student Tyler Trent found out in May 2017 that his osteosarcoma had spread, he decided to help the Indiana University School of Medicine physician-scientists who treated him learn more about the aggressive bone cancer, which currently has no cure.

Trent, who died Jan. 1 at age 20, was first diagnosed with osteosarcoma at age 15, when the cancer was found in his shoulder area. A few years later, when the cancer returned, he agreed to provide tissue samples from a tumor removed from his pelvis in hopes of prolonging other kids’ lives and motivating them to become advocates for research.

IU School of Medicine’s Jamie Renbarger, MD, leader of the IU Precision Health Initiative’s childhood sarcoma research team and the Precision Genomics Program at Riley Hospital for Children at Indiana University Health, said her research team did clinical and research sequencing of Trent’s tumor and DNA to try to understand what was causing the tumor to grow. This information led the team to select four medications as part of Trent’s personalized treatment plan, including traditional cytotoxic chemotherapy in combination with novel, small molecule targeted inhibitors.

“Without the research that’s been done, I wouldn’t be here or be able to speak to you,” Trent said in a December 2018 interview. “Because of the genomic testing that was done on my tumor … those drugs that were found basically prolonged my life.”

Renbarger said one of the challenges that pediatric cancer researchers face is a lack of tumor models—particularly for relapsed solid tumors that would provide them the opportunity to study cancers that come back.

“One of the really amazing things and very unique things about the samples and models we were able to collect and develop from Tyler is that we not only have a sample from the time of his relapse prior to relapse chemotherapy, but also from after he got chemotherapy,” Renbarger said. “So we can understand what we call the tumor adaptive response—how it changes after exposure to chemotherapy—and also have both of those models to study in the laboratory.”

Trent affectionately dubbed the tumor models developed from his tissues “TT1” and “TT2.” The namesake tumor models will ensure his memory lives on through the research he has made possible.

Trent, whose story was followed widely on social media and in national media, said he hopes his willingness to advocate for research will encourage others to do the same.

Osteosarcoma is among the diseases for which the IU Precision Health Initiative is focused on improving treatments, finding cures and developing preventions.