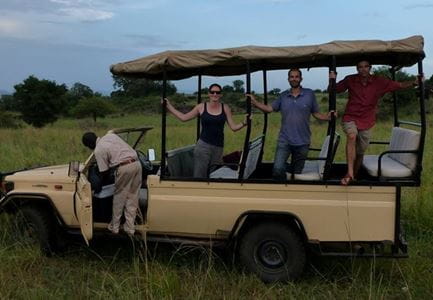 An IU School of Medicine researcher is working to save children’s lives in Uganda through new technology.

“We were having children die every day at hospitals because power would go out and there would be children and infants on oxygen who would have an essential, life-saving therapy interrupted,” said Andrea Conroy, MD, an assistant professor with IU School of Medicine Department of Pediatrics.

“I was inspired by a newspaper article highlighting the impact of power cuts on patient survival at Jinja hospital,” said Conroy. She wanted to find a solution for those needing a consistent supply of oxygen.

A hospital ward for children at Jinja Hospital in Uganda.

Conroy says there are two main systems of oxygen delivery that have been implemented and evaluated in resource-limited settings like Jinja, oxygen cylinders and oxygen concentrators. Oxygen cylinders are ready to use, simple to operate and do not require electricity, but they are expensive and can be difficult to distribute. Because of that, the hospital in Jinja relies primarily on oxygen concentrators, which can purify oxygen from ambient air and directly deliver it to patients. However, they require a constant, uninterrupted electrical supply, meaning prolonged power cuts can be the difference between life and death for children with severe pneumonia.

Conroy joined a team of researchers to try to come up with another method. The result: a solar-powered oxygen system that can harness the energy of the sun to provide life-saving, off-the-grid oxygen.

“It works by using solar panels installed on the hospital roof and a battery inverter system to capture the energy of the sun,” said Conroy. “It then uses that power to fuel the oxygen concentrators and provide children with the oxygen they need, even when the building power goes out.”

The system was implemented and evaluated in 2014 over a 64-day period. During that time, there were 120 power outages. The solar-powered oxygen system was able to run the oxygen concentrator continuously at maximum output for almost three days without an outside power source, even in cloud cover or rain when the panels are not as efficient.

The system was tested on 28 patients with hypoxemic pneumonia and the team saw an immediate improvement in how they got their oxygen. Next, they completed a randomized clinical trial. Conroy says the team found solar-powered oxygen delivery was comparable to cylinder oxygen in improving oxygen status in hypoxemic children with pneumonia. They detailed their findings in a paper published in JAMA Pediatrics this summer.

The team received a Grand Challenges Rising Stars in Global Health grant to fund the study, which is led by Michael Hawkes, MD, PhD, from the University of Alberta. They’re now applying for another grant to look at implementation and commercialization of solar-powered oxygen. Conroy says the next challenge is to scale up the intervention on a national and regional level and evaluate the best method to integrate the technology at different health centers.

“Solar-powered oxygen systems can ensure uninterrupted delivery of oxygen to children in need,” said Conroy. “It’s really quite flexible, because if you can install the solar panels, you can harness the energy of the sun to drive this process when needed. Depending on the infrastructure of the site, you can have it as a back-up method or it can be the primary way you’re using oxygen concentrators.”

Andrea Conroy is an assistant professor of pediatrics at IU School of Medicine.