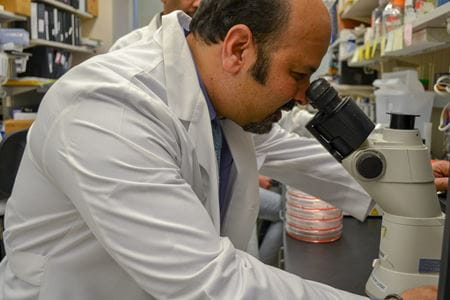 It is not uncommon for people over the age of 50 to possess mutations in their blood cells that can be associated with leukemia, but only a small percentage of them go on to develop the disease. Historically, the mechanism that leads to the development of leukemia in that small percentage has been unclear, but a recent study from Indiana University School of Medicine researchers suggests that inflammation may play a role.

In a study published by “Cell Stem Cell”, investigators from the Indiana University Melvin and Bren Simon Cancer Center and the Herman B Wells Center for Pediatric Research found that inflammation can play a significant role in the growth and survival of hematopoietic stem cells that have pre-leukemic mutations, such as TET2, which could contribute to the development of a condition associated with high risk for cardiovascular disease and leukemia.

The TET2 mutation in blood stem cells and progenitor cells results in high levels of expression of a long non-coding RNA called Morrbid. The study demonstrated that Morrbid plays a big role in the survival of pre-leukemic cells and spread in an environment with other healthy stem cells, eventually leading to the development of clonal hematopoiesis.

“Not only does clonal hematopoiesis due to pre-leukemic mutations increase the risk of blood related cancer, these mutations have also been associated with higher rates of cardiovascular disease, suggesting an association between mutations in blood cells and chronic disease,” said Reuben Kapur, PhD, lead investigator of the study. “So it’s in our best interest to stop its progression.”

The study identified two molecules that can be blocked to mitigate clonal hematopoiesis. The group paired with two pharmaceutical companies to test drugs that target these two molecules, which are known as STAT3 and SHP2. When used on animal models with the TET2 mutation and high levels of Morrbid, the drugs proved effective in partially inhibiting clonal hematopoiesis.

Apexian Pharmaceuticals—an Indianapolis-based company founded on the research of Mark Kelley, PhD—provided their flagship compound APX3330, which is currently in Phase 1 clinical trial, to test its anti-cancer properties and protection against chemotherapy-induced peripheral neuropathy, a common side effect of certain cancer treatments.

Boston-based Novartis Pharmaceuticals  provided its compound SHPO99. The drug’s derivative is also in Phase 1 clinical trials for the treatment of head and neck cancers.

Using the TET2 mutation as a biomarker, physicians may soon perform genetic sequencing to identify and prevent disease development in high-risk individuals—even those who currently feel healthy. The study suggests that the compounds provided by Apexian and Novartis may reduce the risk for full-blown leukemia and cardiovascular disease in people who have clonal hematopoiesis or the pre-leukemic TET2 mutation.

Kelley and Kapur have secured a patent on the molecule for the treatment of clonal hematopoiesis. Next, researchers in Kapur’s group and across the university will examine how other risk factors—such as diabetes and obesity—interact with the TET2 mutation in the development of cardiovascular disease and leukemia.

This study was driven by Zhigang Cai, PhD, and supervised in the laboratory of Reuben Kapur, PhD. Kapur is the Frieda and Albrecht Kipp Professor of Pediatrics, director of the Hematologic Malignancies and Stem Cell Biology research program in the Wells Center and  co-director of the Hematopoiesis, Hematologic Malignancies and Immunology research program at the IU Simon Cancer Center.

Additional contributions to this study were made by investigators in the Experimental and Developmental Therapeutics program at the IU Simon Cancer Center.