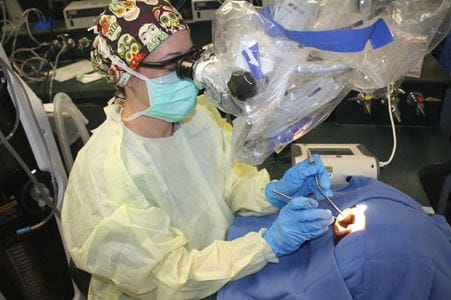 Shortly after clinical activities halted at the start of the COVID-19 pandemic last spring, faculty and residents in the Department of Otolaryngology—Head and Neck Surgery at Indiana University School of Medicine went to work in a different way, pivoting their focus on how to safely take care of patients, as well as each other, once they could return to in-person medicine.

This study—which is ongoing and has so far resulted in nine papers published in multiple peer-reviewed journals—measured the exposure risk of droplets and aerosols in the air during various otolaryngologic procedures. The team, in partnership with Jae Hong Park, PhD, head of the Aerosol Research Laboratory at Purdue University, used the data to form new safety policies to use during and after the pandemic.

Otolaryngology exams, commonly referred to as ear, nose, and throat care, often result in the patient coughing and sneezing, reactions that generate droplets and aerosols and can spread diseases, said Elisa Illing, MD, assistant professor of otolaryngology—head and neck surgery.

According to the Centers for Disease Control and Prevention, people are infected with SARS-CoV-2—the virus that causes COVID-19—through exposure to respiratory droplets carrying the virus. This includes larger droplets and smaller droplets and particles, called aerosols.

These respiratory droplets are produced through the nose and mouth, most commonly through breathing, speaking, singing, coughing, and sneezing, according to the CDC. That was an initial concern for otolaryngologists at the beginning of the pandemic, Illing said, since the highest viral loads were suspected in the nasopharynx—the upper part of the throat behind the nose. The nasopharynx is commonly a part of the throat otolaryngologists closely examine and operate on patients.

“Routinely, in a pre-pandemic environment, a lot of ENT is in the ‘splash zone,’” said Michael Ye, MD, a third-year resident and first author on multiple of the studies’ papers.

With many unknowns about the coronavirus a year ago, Illing said the team quickly came together to seek out how to best run clinics and operating rooms as safely as possible for patients, clinicians, and staff moving forward, such as determining the appropriate personal protective equipment (PPE) needed, room usage and when to test patients for COVID-19.

“A silver lining to the pandemic is that now we’re more aware of this, more thoughtful of the ways to protect ourselves, our patients, and our staff,” Illing said. “Should any other respiratory and upper airway illness arise, I think we’ll be much better prepared and less shocked and less impacted by those diseases because we’ve had to think through our processes.”

Residents pooled together for hundreds of hours of work, day and night, on the investigation. The first part of the study looked at droplet and aerosol generation using cadavers. They simulated procedures typically performed in most otolaryngology subspecialties, Ye said, which included rhinology, otology, facial plastics, general otolaryngology, and head and neck surgery.

To measure the number of droplets in the air, the team collaborated with Park, assistant professor of occupational and environmental health sciences in the School of Health Sciences at Purdue. He researches how to best control aerosols to evaluate and improve air quality.

Park, who’s also a mechanical engineer and certified industrial hygienist, taught the team of otolaryngologists how to use an optical particle sizer, which measures aerosol concentration, for the study. Ye said the cadaver studies showed that most of their procedures did not significantly generate droplets. The only exception would be when they use power drills in surgery in open areas of the face. When they drilled in the nose, Ye said, the droplets seemed to stay within the walls of the nose, so it wouldn’t be as likely to go out into the air.

Months into the pandemic, when it was more apparent to scientists and medical professionals that COVID-19 could spread via aerosols, the otolaryngology team repeated their studies focusing on measuring those particles. Most of their procedures do produce tiny aerosols, Park said.

In its simplest form, an aerosol is a collection of solid or liquid particles suspended in a gas. If the aerosol size is smaller than five micrometers (or five millionths of a meter), they can remain suspended in the air for several minutes to several hours, Park said, and can travel substantial distances, even greater than 6 feet.

“This small particle size increases the risk of airborne disease transmission,” Park said. “Therefore, understanding the size and behavior of these aerosols in the field is important for developing effective preventive measures to control the pandemic.” Because of the detection of aerosols, Ye said the team experimented with suction and evacuation devices that could be used during a surgery. For example, smoke evacuation bovies have been used for years in operating rooms to reduce smoke contamination for surgeons, but they haven’t been examined to reduce the spread of viruses until recently.

Ye said they found that various attachments can be used to reduce aerosols from patients, but they can’t lessen their generation to zero.

Once clinicians returned to routine clinical practice in summer 2020, the research team shifted to measuring aerosols during surgeries and in-office procedures. Sarah Burgin, MD, assistant professor of otolaryngology—head and neck surgery, said not only is there a big difference between investigating on cadavers and during live surgeries and in the clinic, operating rooms have much more regulated air flow and filtration than their temporal bone laboratory space.

“It is really critical to sample this in real life in an actual clinical environment,” Burgin said. “What we’re doing now is the next step for informing our policies going forward.”

Dhruv Sharma, MD, a fourth-year resident and first author on multiple publications, led the studies within operating rooms and in the clinic. This research didn’t require any patient interaction; it was environmental research to sample the ambient aerosols in the room.

Sharma said they detected higher aerosol levels during rhinology clinic procedures when patients did not wear a mask; they also measured spikes in aerosols during sinus surgery as well as during bone drilling in cochlear implant surgery. During skull base surgery through the nose, Sharma said they didn’t detect significant aerosols during powered drilling while placing a suction device in the nasopharynx. Multiple institutions are now using this simple technique to reduce aerosols during sinus and skull base surgery.

These findings on patients in the operating room correlate well to the group’s previous cadaver studies, Sharma said. They’ve confirmed that aerosols are generated during most sinus, skull base and ear surgeries and that suction devices help mitigate this process. Drilling bone and using an electrocautery device were confirmed to both produce the greatest amount and smallest size of aerosols.

One of the most impactful findings of the study, Ye said, was used to inform pre-operative policies at Riley Hospital for Children. Children—mostly between the ages of 1 and 4—who were scheduled for ear tube insertion surgery did not need to get tested for COVID-19. When they sampled for aerosols in the operating room during multiple ear tube surgeries in children, Ye said the levels didn’t rise above the level of detection of their equipment, meaning there was little risk of aerosol generation and spread due to the procedure.

This policy lessens the burden on children and their families in an already restrictive hospital environment due to the pandemic, Burgin added. Only one parent or guardian was allowed to accompany the child into the hospital, so if a parent had multiple children, they couldn’t bring them into the hospital just to have their child undergo pre-operative testing for COVID-19.

“It was a significant barrier,” Burgin said. “It seems like a minor thing to not COVID test these kids getting ear tubes pre-op, but it actually was a big deal and a step toward lessening some of the disparities that happen because these children can still get their routine care with fewer barriers.”

Even though the study is still ongoing, Ye said it’s put IU at the forefront of otolaryngology departments across the United States in writing policies, due to the pandemic, that prioritize health care resources efficiently and create a safe space for patients to receive great care.