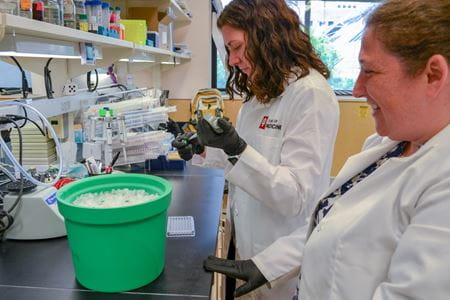 Normal levels of reactive oxygen species (ROS) are crucial in cellular activity, but in excess can lead to the damage, dysfunction and death of a cell. For pancreatic beta cells, which rarely divide, cellular death could lead to the development of diabetes. Like all cells, beta cells have a built-in protection process, but only some survive. Amelia Linnemann, PhD, wants to know why.

In a study recently published in “Diabetes,” Linnemann, along with a team of investigators from Indiana University School of Medicine, characterized important pathways for pancreatic beta cell homeostasis, or cellular stability, particularly as they relate to the antioxidant response system that mitigates the damaging effects of ROS.

In an earlier study, Linnemann and her team found that a protein called Interleukin-6 stimulates autophagy, the cellular recycling system that removes damaged organelles from the cell in order to make room for their healthy replacements. This process promotes the survival of pancreatic beta cells under conditions of oxidative stress.

Linnemann, whose research focuses on beta cell death and survival, was led to a new question: what are the molecular mechanisms that contribute to this protective function?

Important observations that characterized a novel branch of the NRF2 antioxidant pathway were made in the study. According to Linnemann, NRF2 acts as a master regulator for the expression of other antioxidant factors. The team discovered that Interleukin-6 promotes an alternative function of NRF2, in which NRF2 translocates to the mitochondria, instead of following its typical path to the nucleus, and stimulates mitophagy.

Linnemann said that that this discovery could lead to the identification of therapeutic targets that promote the survival of the vital insulin-producing beta cells. Next, the group will begin to confirm and expand on these findings in vivo. Using a novel platform developed earlier this year, she and her team will investigate the mechanisms by which NRF2 translocation is regulated and what conditions determine which mode of action it takes, either nuclear or mitochondrial.

Amelia Linnemann, PhD, is an assistant professor of pediatrics in the IU School of Medicine Department of Pediatrics. She conducts her research within the Herman B Wells Center for Pediatric Research and the Center for Diabetes and Metabolic Diseases.

Significant contributions to this study were made by Abass Conteh, a student in the Medical Scientist Training Program, who developed key techniques that are enabling studies to expand upon these findings.