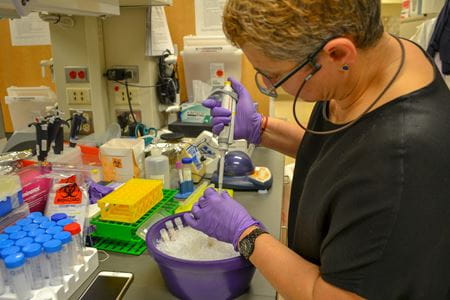 The first time I saw the before and after x-rays, I considered it a miracle. I work for the incredible team of physician-scientists who made this miracle happen. The x-rays I was seeing were of a very young patient. The before x-rays showed a tumor literally choking the life out of this young child. As a mother myself, it broke my heart. This tiny little girl had neurofibromatosis type 1 (NF1), a genetic disorder that causes tissues to develop abnormally. It manifests in both malignant and non-malignant tumors. It is the most common inherited cancer predisposition syndrome. These tumors often encase nerve sheaths which makes them inoperable.

The child’s tumor was slowly squeezing her throat shut and there was little that could be done to stop this life-threatening disease. Her mother was told to simply take her home and make her as comfortable as possible. However, her mother refused to give up. She contacted Dr. Wade Clapp. His lab at the Wells Center for Pediatric Research on the Indiana University School of Medicine campus in Indianapolis had published groundbreaking studies in medical journals that provided the first ever hope for NF1 patients. His team of physician-scientists had discovered a non-surgical treatment for NF1.

Treatment was started by placing medicine in the child’s breakfast each morning. The results were dramatic. Within 6 months, her tumor had been reduced by 70%. She was once again able to attend school, play with her friends and participate in family activities. Eight years later she continues to thrive.

Today, Dr. Clapp’s lab, IU School of Medicine and his global collaborators are considered the world’s foremost experts in this disease and its treatment. Discoveries in the pathogenesis of neurofibromatosis and its treatment are now a model for developing interventions for children with genetic disorders. Exciting research breakthroughs in understanding the causes of childhood diseases and then identifying new treatments and therapies happen regularly at Indiana University School of Medicine and the Wells Center for Pediatric Research on the IU School of Medicine campus. The Department of Pediatrics participates in 200-300 clinical trials annually for new and innovative treatments for diseases that affect children. To date, more than 500 NF1 patients have participated in clinical trials worldwide, and Dr. Clapp and his research collaborators have expanded their research to include presarcomas, sarcomas, myeloid leukemia and schwannomas.