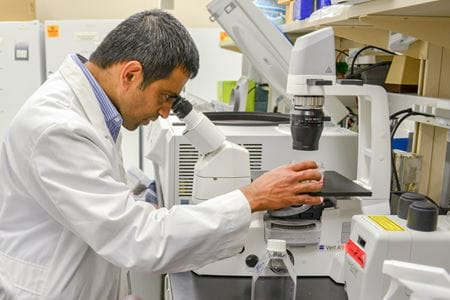 A man looking in to a microscope.

Indiana University School of Medicine researchers, in collaboration with investigators from the Indiana Biosciences Research Institute (IBRI) and around the country, have discovered a new disease.

The disease, called DHPS Deficiency, is a genetic syndrome that results in a neurological disorder, which impacts brain development and function in patients. In a breakthrough study, led by investigators at Columbia University and recently published in “The American Journal of Human Genetics,” IU researchers were among the large group of collaborators that characterized the disease and identified the genetic mutations that cause it.

The study involved five affected patients from four unrelated families. The patients, four of whom are children, exhibited similar symptoms, including seizures and delayed development in speech and motor skills. Prior to this study, the cause of these symptoms was unknown. That is, until medical geneticists at Columbia University identified mutations in the deoxyhypusine synthase (DHPS) gene in each study participant.

DHPS is an enzyme that produces a unique amino acid, called hypusine, which is significant to the production of the body’s essential proteins. To help determine the relationship between the mutations and patients’ symptoms, the team turned to Teresa Mastracci, PhD and Raghu Mirmira, MD, PhD, whose previous work with the DHPS gene puts them among the nation’s foremost experts on the topic.

“Across the affected families, there were multiple mutations,” said Mastracci, senior scientist at the IBRI Diabetes Center. “Our teams recreated those mutations to perform in vitro assays that allowed us to observe their effects on cellular behavior.”

They found that the DHPS gene mutations in participants caused a reduction in DHPS enzyme activity. The study determined that this reduction leads to the clinical outcomes observed in the patients.

“It’s important to acknowledge the collaborative nature of this study,” said Mastracci. “Each investigator and research team brought essential expertise to the work, and our novel findings were the constellation of this collaborative effort. This is the first description of a new monogenic disease, which is incredibly impactful for the affected individuals and their families as well as for future research and treatment efforts.”

For Mirmira, director the Herman B Wells Center for Pediatric Research, this study is one of many that embody the mission of the center that he leads.

“This is why we’re here,” Mirmira said. “To identify the causes and mechanisms of pediatric disease and to contribute to the development of new treatments that will heal sick kids. We demonstrated that the DHPS gene is significant and built tools to investigate it further. Now that we see how important it is to neurological development, we can begin to look for ways to help.”

Both Mastracci and Mirmira said they intend to build on their existing data by developing models for in vivo analysis of DHPS Deficiency. They said that they hope their models will lead to translational opportunities that result in future treatments for affected children and their families.

Teresa Mastracci, PhD, is a senior scientist at the Indiana Biosciences Research Institute (IBRI), where she leads the Regenerative Medicine and Molecular Biology research group within the IBRI Diabetes Center. She is also an adjunct assistant professor of biochemistry and molecular biology at Indiana University School of Medicine.

Raghu Mirmira, MD, PhD, is the Eli Lilly and Company Professor of Pediatric Diabetes. He is the director of the Center for Diabetes and Metabolic Diseases, the Herman B Wells Center for Pediatric Disease, and the NIH-funded Medical Scientist Training Program at Indiana University School of Medicine.

Indiana University researcher Kentaro Yamada, PhD, research associate at the Herman B Wells Center for Pediatric Research, also made contributions to this study.