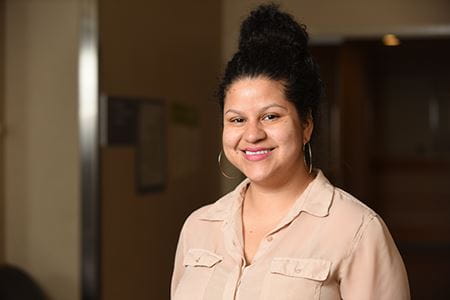 Carolina Otero is a community health worker for the CARE Plus program.

As long as she can remember, Carolina Otero has felt a calling to help others. Now, she is helping mothers and babies recovering from opioid addiction through a new program with Indiana University School of Medicine called CARE Plus.

“I want to show people who feel like they don’t have a way out that there is hope,” said Otero. “It really brings me joy and happiness to be able to help someone out.”

Otero is a community health worker with CARE Plus and the Regenstrief Institute. The program is for new mothers who were addicted to opioids during pregnancy and have babies born with neonatal abstinence syndrome, a condition that occurs when the fetus is exposed to those opioids. The babies are born addicted to the drugs and can spend up to two to four weeks in the neonatal intensive care unit recovering. After that, the new mother and baby often face major challenges, like finding new healthcare providers, housing, food, clothing or more.

Otero is not a health care professional or therapist. Instead, she acts as a coach and support system, focusing on building relationships, teaching mothers how to care for themselves and their babies and helping mothers get any resources they may need for their families.

“A lot of these women have low self-esteem, depression, anxiety or bipolar disorder, so I help them find resources for that, which can be hard for them,” said Otero. “I am very empathetic with them because as an outsider or a stranger, they are very hesitant to accept help.”

Learning to be empathetic to the situations many of these women find themselves in is something Otero has been experiencing almost her entire life. She was born in Honduras and lived with her brother and aunt for the first few years of her life while her mother worked in the United States. Eventually, her mother was able to bring Otero and her brother to New York with her, and Otero spent most of her childhood in the Bronx. That’s where she first felt a calling to help those less fortunate than she was.

“I never really went hungry and I had everything essential,” said Otero, “but I always felt sad when I saw people begging in the street or children with no shoes, and I always thought, ‘why is that? Why do I have it and they don’t?’ and I just grew up wanting to help.”

Otero experienced some of her own challenges as well. She did not speak English when she first moved to New York, and her mother was a single mom who was frequently working in order to provide for her family, but it’s those experiences that are helping Otero now care for new mothers recovering from drug addictions in Indianapolis.

“A lot of the moms in the program are single moms, and I have seen how difficult it is for them to be getting over a drug addiction and trying to raise a child,” said Otero. “It’s really beautiful to be able to show them how to care for their child and that they can do it.”

Otero regularly meets with mothers and other caregivers in the child’s life and encourages them to see a therapist or participate in addiction treatment. She also helps them find other resources they may need, such as fresh fruits and vegetables or low-cost clothing and diapers in their area. Because of all the challenges they may be going through, Otero says it’s important for her to build trust with the women in the program.

“I understand it takes time, so I’m never pushy. I really just let it happen and eventually they do trust me and they appreciate the help,” said Otero. “I know many people who have recovered and they have turned their life around completely. It’s a process and it’s not easy, but they can do it.”

After one year, the CARE Plus research team will evaluate what kind of impact the community health worker method has on a family. For Otero, she wants part of her impact to be giving them hope for the future.

“What I look forward to most in this program is giving them hope and being there for them and their family,” said Otero. “It’s really nice that I can follow these women for a couple of years and be there for them and just hope for the best.”

Learn more about the CARE Plus program at IU School of Medicine.