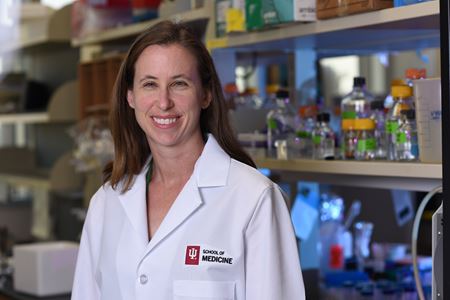 Crawling, standing and walking are major milestones for a baby. But each year, thousands of children in the United States lose their ability to learn those basic motor skills, and instead show symptoms of a deadly, genetic disease called spinal muscular atrophy, or SMA.

“Their spinal cords basically fail, and they become unable to move their arms and legs, and eventually become unable to breathe,” said Sara Custer, PhD, an assistant research professor with IU School of Medicine Department of Dermatology. “Without intervention, they generally die at about a year of age.”

Custer says SMA is the leading cause of genetic infant deaths in the United States, but she and several other researchers are hoping to change that. They are studying a protein called the survival motor neuron, or SMN. Children with SMA are unable to make SMN, causing them to show symptoms typically between just three and six months old.

“The reason that the SMN is inefficient is that it doesn’t splice correctly,” said Custer, “and so instead of making the whole protein, it just makes the front part of the protein.”

Custer earned her PhD in neurobiology from the University of Washington. Since joining IU School of Medicine in 2011, she has been working to find a treatment that would help SMA patients create a protein similar to SMN to alleviate their symptoms.

“Our patients have a backup copy of the SMN protein,” said Custer. “It’s very inefficient, but it is capable of producing a small amount of the SMN protein. We screen for those compounds that allow those cells to make more SMN with the genes that they have remaining.”

Custer says one treatment already exists, but it involves an injection into the spinal cord every two months for the rest of a child’s life, something that can be difficult for children and their parents to experience.

“I think our ideal situation would be that we have infants where they get that DNA right away when they’re infants to let their body have a window to recover,” said Custer, “and then hopefully we would be able to switch over to an oral therapy, an oral therapeutic.”

Now, finding SMA in children earlier is becoming more likely in Indiana. In March 2018, Governor Eric Holcomb signed a bill into law that adds SMA to the list of screenings for all newborns. Custer says these screenings are important, because finding SMA as early as possible in a newborn’s life can help them in the race against time.

“If we could identify SMA babies as soon as possible, that gives us the widest window to explore their therapeutic choices before their body starts to show symptoms,” said Custer. “It has been shown in animal models and in the recent Spinraza clinical trials that earlier intervention produces the most robust clinical outcome, so being able to identify SMA infants at birth offers the best opportunity for meaningful therapy.”

In 2016, Elliot J. Androphy, MD, chair of the Department of Dermatology, was awarded a three-year IGNITE, or Innovation Grants to Nurture Initial Translational Efforts, from the National Health Institute. The department received $431,954 the first year. Custer says that funding is helping their team make major strides in helping SMA children and families.

Sara Custer is an assistant research professor of dermatology at IU School of Medicine.