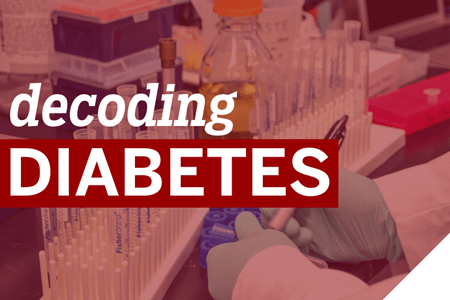 More than 15,000 scientists and health care professionals gathered at the American Diabetes Association’s 79th Scientific Sessions in San Francisco earlier this month. Among them, investigators from the Center for Diabetes and Metabolic Diseases (CDMD) shared novel data with the worldwide scientific community from basic, translational and clinical studies conducted recently at Indiana University School of Medicine.

“We are always excited to share our work with colleagues at the ADA conference,” said Raghu Mirmira, MD, PhD, director of the CDMD and the Herman B Wells Center for Pediatric Research. “Not only because we’re proud to be leaders in diabetes research, but because we believe that sharing our wealth of knowledge and fostering collaborative partnerships are key to scientific progress. Ultimately, we are here to help people and families who are faced with diabetes—and no one can do that alone.”

Type 1 diabetes is an autoimmune disease that launches an attack on the body’s insulin-secreting beta cells, which reside in special regions of the pancreas called the islets of Langerhans.

According to Mirmira, a central theme at this year’s ADA Scientific Sessions was that autoimmunity might in fact be a normal response to an abnormal beta cell. This school of thought challenges some conventional thinking among diabetes researchers, but Mirmira said that scientists at IU—who are known for their expertise in pancreatic islet biology—have been uncovering data that support this concept for years.

The beta cell may not be an innocent bystander in diabetes development, but to what extent can it actually trigger the disease?

That’s been a central question for Sarah Tersey, PhD, who presented her findings on the subject in San Francisco.

Tersey’s team has worked to identify mechanisms of inflammatory signaling in the beta cell. In excess, inflammation can contribute to the cellular dysfunction and stress that’s associated with the very early stages of diabetes development. Her team identified one proinflammatory signal, called 12-HETE, that when deleted from the islet prevented diabetes development in animal models.

“By only changing one thing in the beta cell, we were able to prevent autoimmunity,” Tersey said. “This indicates that the beta cell is a major player in diabetes pathogenesis. That excites me because we are one step closer to figuring out how diabetes develops, which brings us closer to preventing the disease.”

The group was the first to identify small molecules that target the enzyme that produces 12-HETE. Using these molecules, they effectively prevented the progression of beta cell dysfunction in models of Type 1 diabetes.

Tersey said they hypothesize that a similar approach could have the same protective effect on people. They are currently working to identify inhibitors for this pathway in human beta cells.

A major focus of CDMD islet biologists is understanding the cellular activities that lead to dysfunction, damage and death of the insulin-producing beta cells.

“We believe that the events that lead to the attack on beta cells may actually be mediated through defects in the beta cell itself,” said Amelia Linnemann, PhD, whose presentation at the ADA conference was on the topic of autophagy.

Linnemann has a special interest on the beta cell’s response to oxidative stress. Oxidative stress happens when there is build-up of reactive oxygen species (ROS), a byproduct of normal cellular activity. This build-up can wreak serious havoc on the cell’s ability to function properly.

When ROS begins to damage the cell’s organelles, a built-in system called autophagy is designed to recycle out the old parts and replace them with healthy new ones. But if this system fails, those broken parts clutter the cell, halt productivity and lead to cellular death.

Studies in Linnemann’s lab suggest that people who develop Type 1 diabetes may have a defect in their beta cells’ built-in recycling system. They are working to identify important mechanisms that contribute to stabilizing the cell.

Bolstering this work, Michelle Marasco, PhD presented important new data about the processes that help achieve stability, including a protein called Interleukin-6 and its important role in the NRF2 pathway.

They said they hope to use this information to develop new targets for future therapies that could help promote survival of beta cells.

But first, they need better tools.

Beta cells are buried deep inside the body, which means that observing their activity is difficult. Traditionally, scientists isolate pancreatic islets in a dish for observation; others use animal models to conduct experiments and observe outcomes without being able to monitor the cellular activity that leads to those outcomes.

This is a shared struggle among diabetes researchers worldwide. After all, in order to determine how an abnormal beta cell can catalyze autoimmunity, it is crucial to be able to visualize its activity in its most natural state: inside of a living body.

Using fluorescent biosensors, scientists can select which components they’d like to visualize, such as nuclei (blue), vasculature (green) or mitochondria (red). Here, the islet is outlined in white.

Using a combination of fluorescent biosensors and intravital microscopy, Reissaus and his colleagues were able to monitor specific biochemical pathways in cells. Importantly, they can use this to gather unique insights about the same collection of cells in the same model over time. The group describes this platform in a recently published study from Nature Scientific Reports.

With this unique methodology, scientists at IU and elsewhere can begin to study how beta cell function and signaling changes during the course of diabetes development and progression. Their ultimate goal is to uncover new data that will lead to novel interventions and treatment for people with diabetes.

But what about after autoimmunity has already begun?

“These results are of great worldwide importance for persons impacted by Type 1 diabetes, especially the relatives of people with Type 1 diabetes who are themselves at 15 times greater risk of developing the disease than the general U.S. population,” said Linda DiMeglio, MD, MPH, TrialNet Principal Investigator and professor of pediatrics at IU School of Medicine.

TrialNet investigators at IU, including those in the pediatric diabetes clinical research group, used a drug called Teplizumab in trial participants who were high-risk for Type 1 diabetes.

Teplizumab is an anti-CD3 antibody designed to interfere with the destruction of beta cells. They found that the immunotherapy delayed Type 1 diabetes diagnosis for a median of two years among participants.

So is autoimmunity a normal response to an abnormal beta cell?

Scientists are still working to uncover the components of diabetes development and progression, but Mirmira said that the evolving consensus among researchers at IU is that the beta cell is more than an innocent eyewitness.

“Several studies suggest that somehow the beta cell intrinsically triggers an immune response and that there are important lessons to be learned about how diabetes can be prevented in the very early stages before autoimmunity occurs,” Mirmira said. “That’s why it’s so important to also develop novel techniques that allow scientists to better visualize cellular processes in order to address the complex questions that remain—questions our team of scientists are determined to answer.”