Child Development - Understanding Why We Do What We Do: The Function of Behaviors 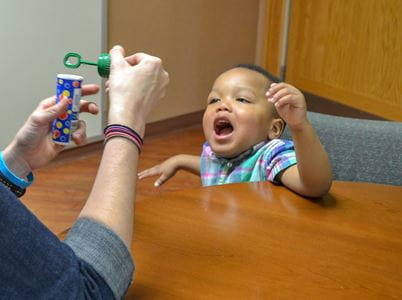 A young child plays with bubbles

Why do we do the things that we do? What drives children to engage in negative and inappropriate behaviors? Behavior Analysts have frequently discussed the importance of understanding the function of behaviors when attempting to change behaviors. There are generally 4 accepted functions used to explain how and why a behavior occurs.

Behavior Suggestion: If your child is engaging in attention-seeking behaviors, it is important that these behaviors are NOT reinforced. This means that they should not get any response or attention from anyone present. Planned ignoring is an excellent strategy to help minimize this type of behavior. Additionally, parents/caregivers need to give a significant amount of attention when something positive happens. Show the child that he/she can get your attention, but only when they are doing something appropriate.

2. Access to Tangibles or Activities
A child will often engage in a behavior to gain access to something. Again, this can be positive behavior (such as asking permission to get a snack) or it can be a negative behavior (such as screaming and crying until mom/dad breaks down and buys them a desired toy).

Behavior Suggestion: Children who are engaging in negative behaviors for escapes/avoidance should be required to finish the task. Time-out is not appropriate here because the child is getting what he/she wants (avoiding or early termination of the task). Parents need to see the task through to completion by requiring the child participate before allowing them to leave or end a task. This may mean offering physical assistance (putting your hand over their hand while they put toys away) or not allowing them to do anything else until the required task is completed.

4. Sensory Stimulation
If none of the three above mentioned functions appears to explain the behavior, it might be that the behavior is occurring simply because the child is getting some sort of sensory input or stimulation from it. For example, a child may rock back and forth because it is pleasing to them.

Behavior Suggestion: If a child is engaging in a behavior for sensory stimulation purposes, we need to work to find a more appropriate replacement behavior. Identify what the sensory input is and see if there is something else that can give that input but that is more socially acceptable.

Parents often report negative and difficult behaviors. Understanding why a behavior is happening can assist with identifying how to minimize or stop a negative behavior.

Dr. Christine Raches is a clinical psychologist and Board Certified Behavior Analyst at the Riley Child Development Center. She currently serves as the Training Director for the LEND Program. She participates on an interdisciplinary team that conducts evaluations on children with suspected neurodevelopmental disabilities, behavioral disorders, or developmental delays. She also supervises graduate- and post-graduate- level trainees.

Cristina James is the Data Coordinator, Associate Training Director, and Family Discipline Coordinator in the Department of Pediatrics, Division of Child Development at Indiana University School of Medicine. She has over 10 years of professional experience and a life-long lived experience in neurodevelopmental disorders which, combined with her analytical skills, allow her to effectively span across functions to help provide and improve many LEND outcomes.