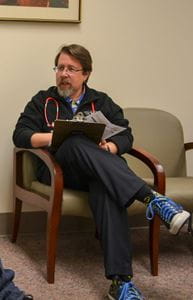 Note: The child referenced in this story is fictional and was created from an amalgam of many patients seen through years of developmental evaluation experience. The fictional child was created in an effort to share a somewhat common case that presents in our clinic, while still protecting patient privacy.

“Her doctor and her preschool teacher brought up autism.” Leah was three years old and her mother was trying not to appear anxious.

They had been referred to the Riley Child Development Center by their pediatrician after she had noticed several concerning developmental red flags. While Leah’s motor milestones were happening at the expected times, her communication was markedly delayed. Over the past four months, Leah had started using four or five signs for expressions such as “thank you”, “please”, and “more”. I asked what behaviors, specifically, had prompted the question of an autistic disorder. “Well, she tends to play alone. She seems uncomfortable when other children try to involve her. She is very routine oriented and can become pretty upset if our day doesn’t go as planned or as she thought it would go. She likes music and watching the same movies repeatedly.” On the other hand, when I asked about other social interaction skills, Leah’s mother noticeably brightened. “She’s always held up her hands, wanting to be picked-up and held. She often tries to get my attention if I’m distracted by something else, even to the point of grabbing my face to look at her. She brings leaves and rocks to me to look at and comment on when we’re outside.” The only family history of any developmental delays was a first cousin with early articulation disorder, which was corrected with speech therapy.

Leah was active and inquisitive during the physical examination. She was fascinated by my stethoscope and would always look up at me before she tried to grab it. When her mother would gently try to get her to stop, Leah would look at her and give a huge smile. She made some babbling noises and said “mom” a couple of times to get her attention. Her growth parameters were all within the normal ranges for age. She had no balance or motor problems. When I engaged her in ball play, she was enthusiastic. The results of a hearing evaluation were normal. She had a cognitive assessment which revealed that her non-verbal skills were in the average range for age. Language skills testing indicated that while Leah’s receptive language (what she understands) was average, her expressive language (what she can verbally convey) was in the moderately delayed range.

Leah was diagnosed with a moderate expressive language delay. She did not meet the criteria for autism spectrum disorder. She was enrolled in individual speech therapy and is making progress.

The behaviors of children with early communication delays can appear pervasive, causing parents and professionals to wonder if the child has an Autism Spectrum Disorder. Because they have little or no way to let others know their wants and needs, these children will often avoid peer interactions, preferring to play alone, and be more comfortable with a strict routine. Some of these children can become so frustrated that they will behave aggressively toward themselves, hitting their head or biting themselves and others. These behaviors, though, will usually fade as the child gains more communication through speech, sign, and alternative methods such as the Picture Exchange Communication System (PECS). While they may demonstrate pervasive-appearing behaviors in some settings, most children with primary communication delays will continue to show age-appropriate social skills such as seeking and holding eye-contact, shared attention, and seeking comfort from caretakers.

There are times, though, when discerning whether a young child, a toddler or preschooler, has a communication problem or a pervasive developmental disorder, or both, is difficult. An excellent screening instrument is the M-CHAT (The Modified – Checklist for Autism) developed at the University of Connecticut. It consists of 23 yes/no items covering social, communication, and sensory concerns. A child fails the checklist when 2 or more critical items are failed OR when any 3 items are failed. Some of the critical items include: not taking an interest in other children, never pointing to indicate interest in something, never bringing objects to caregivers to show to them, never imitating, or never responding to his or her name. Those children need to be evaluated carefully by an interdisciplinary team, including audiology, pediatrics, psychology, social work, and speech pathology, and have scheduled follow-up evaluations to monitor their progress. If the child is younger than three years, an evaluation by the 0-3 developmental intervention services in the family’s state is a great place to start. These early intervention programs go by different names in each state. In Indiana, it’s called First Steps. Know where to contact those services for your state and use them for any child whose development concerns you. For children with more complicated problems and behaviors, a referral to a developmental team is recommended.

Bill Beechler is a board certified developmental-behavioral pediatrician working in the Riley Child Development Center (RCDC). At the RCDC he works as part of an interdisciplinary team evaluating and treating children with neurodevelopmental disorders. As an assistant professor of pediatrics with the IU School of Medicine, he trains pediatrics, internal medicine, and psychiatry residents as they rotate through the RCDC.

Cristina James is the Data Coordinator, Associate Training Director, and Family Discipline Coordinator in the Department of Pediatrics, Division of Child Development at Indiana University School of Medicine. She has over 10 years of professional experience and a life-long lived experience in neurodevelopmental disorders which, combined with her analytical skills, allow her to effectively span across functions to help provide and improve many LEND outcomes.