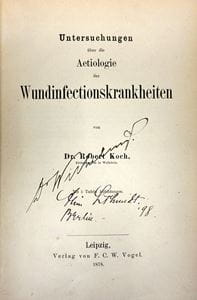 German physicist Robert Koch (1843-1910) was awarded the Nobel Prize for Physiology or Medicine in 1905 "for his investigations and discoveries in relation to tuberculosis."[1] He is considered to be the founder of modern bacteriology and notably was able to prove the bacterial cause of anthrax, cholera, and tuberculosis. His team developed ways of staining bacteria for easier viewing under a microscope, and his assistant Julius Richard Petri, who expanded upon their work in developing a gelatinous substance for growing the bacteria, created the Petri dish.

Published when he was just 35 years old, Robert Koch’s Untersuchungen über die Aetiologie der Wundinfectionskrankheiten (1878) was an important early work by the future Nobel Prize winner. At only eighty pages, bound in fairly plain brown boards with a simple paper label to the spine, the item physically does not stand out on the shelf. And yet, it was the work that brought Koch to prominence. The work recounts his study on the causes of traumatic infectious diseases through the inoculation of animals, which he carried out over multiple generations, and, for the first time, demonstrated the specificity of infection. This work also includes his first mention of the criteria of contagion, which became known as “Koch’s Postulates”:

A digitized version is available online through the Wellcome Library’s digital collections: https://wellcomelibrary.org/item/b20394329