Historical Book of the Week: Shellshock and Its Lessons (1917) 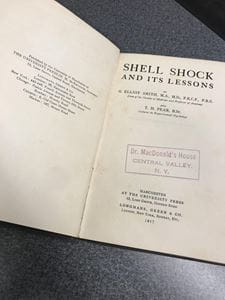 Copy of Shellshock and Its Lessons, 1917, located in the Leo J. McCarthy, MD, History of Medicine Room and Collection at the Ruth Lilly Medical Library (photo by author).

Copy of Shellshock and Its Lessons, 1917, located in the Leo J. McCarthy, MD, History of Medicine Room and Collection at the Ruth Lilly Medical Library (photo by author).

Shellshock: How it Changed Everything for Mental Health

Shellshock and Its Lessons, a copy of which is housed in the Leo J. McCarthy, MD, History of Medicine Room and Collection at the Ruth Lilly Medical Library, emerged only three years after the start of World War One. This 1917 book by Elliot G. Smith and T. H. Pear focused on an issue that transformed society during and after the war. The emerging psychological issue of ‘shellshock’ was high profile, with the suffering of the soldiers affecting every element of society. Shellshock, now more likely to be called Post Traumatic Stress Disorder, was the term used for the wide variety of health problems the soldiers suffered from after serving in the war, though it later became used solely for the psychological problems caused by the horrors of the war. The upper classes of society were disproportionately affected by shellshock, with a higher proportion of officers suffering from the illness than regular soldiers. The inclusion of the upper class allowed shellshock to be viewed as an actual illness, rather than the early suggestions of cowardice or lacking manliness often used to explain the issues of the soldiers before the 20th century. A historical inquiry into shellshock by Elaine Showalter in 1985 further demonstrates the importance of this mental illness in both social and medical history as well as confirming the often opposing views on the disease that were held by doctors at the time, an insight also made by the two doctors who wrote Shellshock and Its Lessons.[1]

Shellshock played a vital role in the development of psychiatry and psychology as a respected field of medical study, with the emerging prominence of a mental illness raising the profile of mental health within the medical and public worlds.  This book was written to convey the understanding of this mental illness to the demanding public, as well as medical professionals, on a topic where little concrete understanding was present. Shellshock and its Lessons therefore reflects the increasing public involvement in the medical profession that happened during the early 20th century. Smith and Pear’s focus on creating this book to be understood by the both lay people and professionals is linked to the widespread concern that people expressed over the suffering of their friends and relatives. Later historians have suggested that mass numbers of the population were affected by shellshock, due to their difficulty returning to civilian life at home, leading to high demand for information about the mental illness.[2]

The book details the wide variety of suggested causes, symptoms and treatments that existed for shellshock, which is unsurprising given the lack of agreement in the field of psychiatry at the time. Doctors held very different ideas and used opposing approaches to mental illnesses. The differing and often clashing ideas show the developing nature of the medical world, with the early 20th century being a time of development for the field of mental illness. Examples of this clashing nature come from the contrasting treatments that Smith and Pear present, including ‘psychological analysis and re-education,’ ‘firmness and sympathy,’ ‘isolation’ and ‘suggestion and hypnotism.’[3] The variety of ideas and contention surrounding shellshock came to characterize historians’ studies of the mental illness itself, with disagreement over which explanations and approaches to the treatments were suggested and utilized by professionals at which point in history. [4]

Shellshock also had a profound impact on the world of mental health due to the prominence of the sufferers, with thousands of men affected in Great Britain alone. Pre-war psychiatry was largely focused on anyone being classed as mentally ill being placed in asylums, which offered little hope of successful treatments and rehabilitation into normal life. Shellshock forced this to change, as thousands of men could not just be branded ‘lunatics’ and placed in asylums, leading to the development of many approaches to treating the men, rather than abandoning them to the asylums. Smith and Pear’s concluding chapter, Lessons of the War, details their suggestions for the progression of the field of psychiatry, which they present as necessary after the mass diagnosis of men suffering from shellshock across the country. These suggestions included changes to the health system in Britain in order to facilitate better understanding of mental illnesses, as well teaching of psychology as an element of the medical profession.

Shellshock and Its Lessons demonstrates how the singular disease of shellshock significantly impacted the development of the field of mental health, with psychiatry becoming a more valued and professionally viewed field within medicine. Smith and Pear present a straightforward yet detailed understanding of all elements of the disease that existed at the time, alongside a commentary of the existing place of mental institutions and also recommendations for the continued development of the field. Shellshock and Its Lessons is an important book in the study of mental history, as it characterizes many of the elements of change and development that occurred in psychiatry during the early 20th century.