History of Medicine Book of the Week: Tokology (1885) 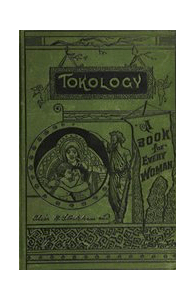 Front cover of Tokology: A Book for Every Woman by Alice Bunker Stockham. [i]

Tokology: A Book for Every Woman

Tokology: A Book for Every Woman was written in 1885 by Alice Bunker Stockham, an obstetrician and gynecologist who practiced in the late nineteenth century. The term “tokology” refers to the study of childbirth, midwifery, and obstetrics. Stockham wrote Tokology for women to give them knowledge about issues related to childbirth and help them understand how to maintain their own health. The book empowered women by informing them about their own bodies and how they could optimize their own health. It covered many issues that women deal with and goes into detail about things that women may not have talked to their doctors about considering the lack of female doctors at the time of publication. The wide distribution of this book allowed for women of a variety of socioeconomic backgrounds to have access to information that was often only accessible to women who had access to physicians and the knowledge they possessed. An illustrated, revised edition of this book printed in 1907 can be found in the Leo J. McCarthy, MD, History of Medicine Room and Collection at the Ruth Lilly Medical Library.[ii]

Throughout the book, Stockham gave advice aimed to relieve the suffering of women and ensure women that they could go through most of their life without having to succumb to the suffering that was normalized for women such as pain during childbirth. The practical solutions given for the medical concerns of women helped readers see that it was possible for women to be healthy and strong enough to be powerful members of an industrial society that often saw women only as weak, frail home makers.[iii] The book described the anatomy and physiology of the female body during various stages in understandable terms and includes advice and tips on how to remain healthy throughout each stage of life. The chapters are both descriptive and practical and the tone is similar to that of a woman’s personal doctor explaining to her patient what she needs to know and do to be healthy throughout her life and pregnancies. The majority of the book focuses on the topics of conception, fetal development, pregnancy, and childbirth in normal and abnormal states. Along with explanations of pregnancy in detail from a medical perspective, there are full chapters giving instructions on how to remain hygienic during pregnancy and comfortable despite complications such as constipation and migraines. There are three chapters about caring for infants and diseases of infants that can arise. The final section includes chapters on menstruation and menopause as well as a chapter including almost forty pages of diet advice and healthy recipes.

Stockham was the fifth woman in the United States to receive medical certification and become a practicing medical doctor.[iv] At the time of Tokology’s publication, women’s health was a taboo subject that was avoided even by the public as well as most health care practitioners.[v] Physicians were challenged with approaching these taboo subjects in a respectable, professional way even when the nature of the discussion was often viewed as obscene and inappropriate. Advice books like Tokology provided an opportunity for women physicians to prove their own worth in medicine in a time when they were often viewed as unwelcome and unfit for membership within the medical profession. By publishing a book about women’s health issues, Stockham was able to communicate to the public that women’s health was an important aspect of the growing fields of medicine and healthcare.

Tokology had over 200,000 copies circulating by 1892 in five different languages.[vi] She even had the book privately copied and distributed door to door in Chicago, where she practiced as an obstetrician and gynecologist. She included a certificate for a free gynecological exam in each of these copies. Stockham’s distribution of Tokology made it more than just a resource of information for women since it was also part of her attempts improve the health of her community. The distribution of the book to women across the world helped to establish the value of women’s health in the field of medicine. It pointed out the needs of the everyday woman in the nineteenth century and how medical advice can help women to live healthier lives with less suffering. Tokology made progress in helping demonstrate the confidence that comes from being aware of how to maintain one’s own health instead of being subject to the fear that comes from the lack of knowledge. Tokology is more than just a book for every woman; it is an example of the power of education and distributing knowledge to a population to promote the health of a community.

[i] Alice B. Stockham, Tokology: A Book for Every Woman (Chicago: Sanitary Publishing Co., 1886). Available online via the U.S. National Library of Medicine Digital Collections: https://collections.nlm.nih.gov/catalog/nlm:nlmuid-67130740R-bk