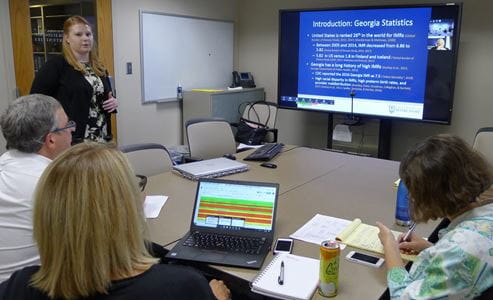 Katie Dorsett defends her thesis before a panel of University of Notre Dame and IU School of Medicine-South Bend representatives.

Ever since Katie Dorsett arrived at IU School of Medicine- South Bend, she made her passion for children and interest in pediatrics easy to see. For example, in the summer between her first and second years, she squeezed in two disparate opportunities to learn about children, by shadowing a pediatric oncologist and volunteering for a week at a camp for children with mental or physical disabilities.

Dorsett was driven to know how she could do her best for her patients and minimize barriers instead of creating more. As a volunteer at the IU School of Medicine-South Bend Navari Student Outreach Clinic, Dorsett says she quickly learned that a multitude of factors affected patient health.

“There’s so much about how a physician fits into the health system that we don’t have time to learn in medical school,” she said.

The Decision to go Dual

To learn those answers, Dorsett choose the to pursue—as a dual degree in addition to her MD— a master’s in global health offered in cooperation with the University of Notre Dame. She finished her second year of classes, took Step I, then enrolled in the one-year program in August, 2017.

In July, she defended her thesis, a sophisticated analysis of feto-infant mortality in Georgia from 2003 -2015 using a framework called BABIES. She learned that whether or not an infant dies is related to the health of the mother before and during pregnancy. Her analysis demonstrated that Georgia’s efforts failed to reduce the disparity between white and black or African American populations.

Her capstone project aside, the program helped open her eyes to how good intentions on the part of a physician might not translate to better patient care. By learning the context of the community, by understanding the barriers to patient health, she says is better prepared to minimize them and to create no further barriers for her patients.

Back now on rotations as a third-year medical student, Dorsett remains dedicated to pediatrics. What direction will she take, with so many different experiences in hand? Time will tell, but her time at the camp with disabled students remains on her mind and has engendered an interest the pediatrics that deal with neurodevelopmental disabilities.