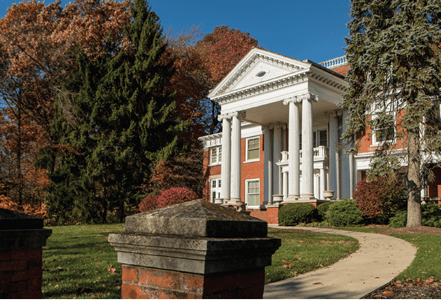 Students doing rotations at Ball Memorial Hospital can stay at a plush pad with critical amenities.

Nestled between a nature preserve and landscaped gardens along a scenic bend in the White River, sits a stately manor house in Muncie that may be the finest medical student housing anywhere in the United States.

Once home to members of the Ball family, the Colonial Revival house features a formal dining room wallpapered in floral prints of matte gold, forest green and deep crimson. A sitting room with a grand piano is adorned with gold lamps and chairs upholstered in rose-colored fabric.

This is Maplewood Mansion, which offers accommodations unlike anything experienced by the other 1,400 students enrolled at Indiana University School of Medicine. Over the past year, more than 120 students have spent a month lodging in its spacious rooms during medical rotations in Muncie.

“We tell them we’ll take them to our mansion,” said Derron Bishop, PhD, center director for the School of Medicine’s Muncie campus. “They laugh. They don’t believe it until they walk up to the door.”

For students, the setup is a steal. They stay in the mansion for free. Parking is free. So is the on-site laundry. Even cleaning and maintenance fall to students in Ball State University’s property management program, which uses Maplewood as a learning laboratory.

A month of comfort and convenience is a combination the Ball Brothers Foundation, which owns the property and leases it to the school, hopes will entice students to do their residency in Muncie, a city of 65,000 looking to shake off a post-industrial identity. The long-term goal is to sell the budding physicians on sowing permanent roots here in a community with an affordable cost of living, stellar schools and abundant parkland.

“We have to raise the level of awareness about all the good things happening here,” said Jud A. Fisher, Ball Brothers Foundation president and chief operating offer.

BEFORE ITS LIFE as a way station, Maplewood was a refuge.

Completed in 1899 and named for a grove of nearby trees, the home was likely inspired by the ones William C. Ball saw as a boy in upstate New York. The red brick façade, gambrel roof, Ionic columns and side porch also reflect the quiet grace possessed by Ball, the eldest of four brothers, and founder of the Ball Corporation.

The company’s roots in Muncie stretch back to 1886, when the Balls’ bustling glass-canning factory—then near the railyards in Buffalo, N.Y.—burned to the ground. At the time, word was circulating that once-sleepy farming towns in the Midwest were enjoying a gas boom that could fuel manufacturing.

One of those towns was Muncie, where Frank Ball arrived in July 1887. He was impressed by the croplands surrounding the town more than the dust-covered community of 6,000 itself. Muncie offered him startup money, seven acres of ground and a private rail line. In March 1888, a 40,000-square-foot factory wheezed to life.

Five years later, the prospering Ball brothers snatched up a swath of land on the northern bank of the White River and erected grand homes.

Maplewood was the last—built after William and his wife, Emma, shuttered their remaining businesses in Buffalo and finally moved west. William died in 1921; Emma remained until her death in 1942. Their only child, William H. Ball, donated the home to the Ball Brothers Foundation seven years after his mother’s death.

In the decades that followed, the mansion’s interior was carved into apartments, then suites to host visiting executives. By 2015, it was without a tenant.

All this time, IU medical students doing rotations in Muncie had been dropping their bags in apartments on the fringes of Ball State’s campus. Bishop found himself not only running a medical school campus but also serving as a landlord.

That’s when Fisher, the Ball Foundation’s president and a member of the Muncie campus’ advisory board, saw an opportunity for a new partnership. He approached Bishop with a question: Would medical students be interested in staying at the house?

“Are you kidding?” Bishop replied.

Now, the Maplewood Mansion Learning Laboratory is part of a collaborative effort dubbed Optimus Primary, an initiative funded by the foundation that explores novel ways of delivering primary care and enhancing medical education.

The setup is especially convenient. The medical school campus, Ball Memorial and Meridian Health Services, another clinic, are clustered within three blocks of each other. Less than a mile to the northeast, Ball State recently opened its College of Health.

“Everything is here in one spot,” Bishop said. “This is something most cities are dying to have.”

IU medical students already cycle through Ball Memorial, getting exposure to the community health setting they will encounter after graduation. Bishop’s job, as he sees it, is to make a convincing sales pitch. Offering them the chance to stay at Maplewood is just one step in making a favorable impression.

Fisher is acutely aware of how Muncie is perceived—as a bland, mid-sized Rust Belt city trying to find its way. Yet Muncie is slowly transforming itself into a hub for healthcare professionals. Ball Memorial and its 350 beds is a cornerstone. The School of Medicine, Ball State, and Ivy Tech have health professional programs that act as feeder lines.

The city enjoys an active arts scene and NCAA Division I sports on BSU’s campus. Cozy coffee shops and craft breweries are sprouting up downtown. Parks are abundant. Fisher thinks the combination could prove enticing to young physicians—only if they see it up close.

THREE YEARS AGO, Jonathan Coss settled in Muncie as one of the skeptics Bishop is trying to convert. Coss grew up in Carmel and attended IU Bloomington. When he applied to medical school, the Muncie center was not among his top three choices.

“It was one of those things where it was totally the luck of the draw,” he said.

Two years later, Coss began pitching his peers on the merits of Muncie. The selling point: ample hands-on experience with preceptors. During his anesthesia clerkship, Coss performed 15 intubations, while his friends in Indianapolis were doing a “handful.”

“I know I learn a lot better doing things hands-on,” Coss said. “There’s a lot of those opportunities in Muncie.”

“Looking back,” he said, “if I had to do it all over again, I wouldn’t have changed anything.”

It’s the kind of endorsement Bishop likes to hear from Maplewood residents.

“We’re trying to increase our pipeline,” Bishop said. “And every bit of positive feedback about the experience here makes that easier.”

Take a peek inside Maplewood Mansion and hear how it fits into Indiana University School of Medicine–Muncie’s plan to draw more physicians to Delaware County.