When Alyson Essex was in grade school, she would come home and watch “Bill Nye the Science Guy” with her grandmother every day after school. While other kids were playing games online, Essex was using the internet to look up anatomy terms from her mother’s nursing books.

It should’ve been no surprise when she told her high school guidance counselor she wanted to be a scientist. But in her small, central Florida town, that career choice seemed unfathomable to the counselor, who told Essex she might want to “leave that to the boys” and find a career more suitable to raising a family.

This month, Essex will graduate with a PhD in cell biology and anatomy from Indiana University School of Medicine. She is a musculoskeletal biologist who has her sights on becoming a science policy analyst.

Essex dedicated her thesis dissertation to that naysaying high school guidance counselor and to all the young women who have been dissuaded from pursing science careers—and to her mother, who fought for her daughter and told her she was smart enough to be a scientist.

Essex has never been one to let others define her path. While she’s definitely into science, she’s always made time for other interests, too. At the University of Miami (Florida), she was in a sorority and played in the marching band while earning her bachelor’s in microbiology and immunology, picking up minors in chemistry and classics (think Greek tragedies).

At IU School of Medicine, she was one of the first PhD students to do a minor in policy analysis for biomedical sciences. Since her advisors at the IU O’Neill School of Public and Environmental Affairs had never mentored someone with a biomedical background, Essex forged her own path. She sought out internships and landed the perfect fit as a scientific affairs policy analyst with the American Association of Medical Colleges (AAMC) in Washington, D.C.

“They wanted someone with a biomedical research background who could look into policies that affect researchers,” said Essex, who worked with the AAMC’s Scientific Affairs cluster on policy analysis in areas including open access, sexual harassment, foreign investment and fetal tissue research.

Her experience with the AAMC expanded her career ambitions. Most PhD graduates take postdoc research positions and go on to become faculty at academic institutions, often opening labs aligning with their research interests. Essex sees a different path ahead as a science policy analyst.

Essex’s research interests began in pregnancy immunology before migrating to bone science. Working in the lab of Lilian Plotkin, PhD, Essex was instrumental in providing preliminary data needed to obtain a grant from the Veterans Research Administration. 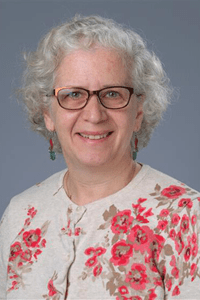 “Since I met Alyson about five years ago, I was impressed by her ability to communicate and her eagerness to learn,” said Plotkin, a professor in the Department of Anatomy, Cell Biology and Physiology. “Her work was fundamental for our understanding of the consequences of an Alzheimer’s disease-related gene variant in bone and skeletal muscle.”

Although Essex “fell in love with bone research” and even got a bone tattoo, she doesn’t see herself tucked away in a lab doing bench research. Her ambitions lie in bridging the gap between the scientific community and policymakers.

“Experts in science communication and government handling of science are highly needed,” said Plotkin, who encouraged Essex to pursue the internship in Washington, DC, and further explore political advocacy related to biomedical sciences. “I witnessed Alyson’s ability as an advocate when I participated in Zoom meetings with her and learned from her how to approach elected officials and how to advocate for the advancement of research in bone biology and in health in general.”

Essex has been selected as a Presidential Management Fellows (PMF) finalist, a highly competitive program administered by the U.S. Office of Personnel Management. Out of 8,065 applicants and 1,100 finalists nationwide, Essex is the only one from IUPUI and one of just 10 finalists from IU.

“This fellowship was meant to recruit, train and retain future leadership in the federal government,” she explained. “I’m excited to take what I’ve learned here to DC. A lot of people think they could use more science in decision making.”

Essex has not yet received a fellowship placement, but she would like to work with policy for the National Institutes of Health (NIH) or the Centers for Disease Control and Prevention (CDC). 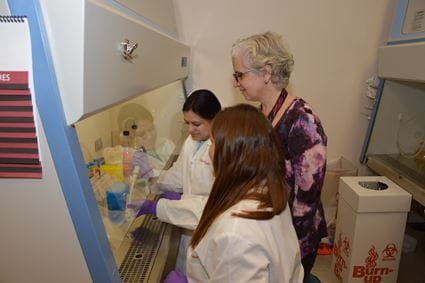 She developed her leadership skills during her time at IU School of Medicine by participating in student government, first serving as the medical school’s Biomedical Graduate Student Advocacy Association representative to the IUPUI Graduate and Professional Student Government (GPSG), then becoming vice president and later president of GPSG.

“I represent all graduate and professional students across the campus—from law to philanthropy to social work and more,” Essex said. “Part of that is interfacing with university administration, the IUPUI chancellor, the board of trustees and IU President (Pamela) Whitten. A lot of my work is advocacy.”

Essex helped launch a graduate student experience survey to gain a better understanding of the unmet needs of graduate students. The survey revealed that an increasing number of graduate students were struggling with food insecurity. As a result, GPSG was able to secure university funding for IUPUI’s Paws’ Pantry, where students can shop for free groceries once a week.

As the PhD speaker for the IU School of Medicine Graduate Recognition ceremony on May 13, Essex will recognize the advocacy efforts of her fellow classmates, who have supported one another as they stood against bias and discrimination. As members of the Class of 2022 move to new cities and make new connections, Essex urges them to continue showing solidarity in solving some of the world’s greatest challenges.

“Our fire will spread, our fight for justice and equity will continue,” she said.

While her passion for advocacy is serious, Essex has found some lighthearted ways to educate people on scientific concepts and policies. She frequently volunteers to host discussions for the Books, Booze and Brains science book club, presented by Indiana Humanities.

“Indiana Sciences and Indiana Humanities are local nonprofits I got involved with because I am passionate about science outreach. It’s so much fun,” Essex said.

The idea is to read a good book with a science theme, then gather over a few drinks to ask questions to an expert in the field. “It’s a funnier version of ecosystem science at a bar,” Essex added.

“Learning how to communicate in different venues has made me a better scientist, and I value those experiences,” Essex said.

When asked where she sees herself in five years, Essex said she prefers to leave her options open.

“I’m not that Type A person who always has a plan,” she said. “I have benefitted from going with the flow and trying new things. My goal is to help as many people as I can, in the most impactful way I can.”

Plotkin has no doubt Essex will do that.

“Because of her combination of passion for science communication and advocacy, and her understanding of scientific research, I believe Alyson will be able to greatly contribute to developing science- and health-related policies,” said Plotkin, “and even, in the future, to be elected for office.”