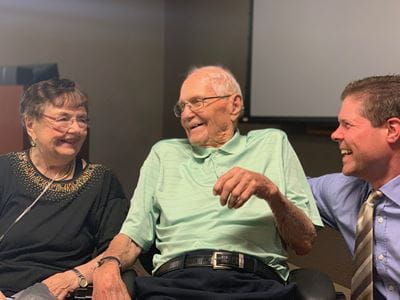 Bill with his wife, Katie, and Bart LeFan.

Bill with his wife, Katie, and Bart LeFan.

One of the oldest active Indiana University employees clocked out for the final time this week.

At 96 years old and a World War II veteran, Bill Depres was honored for his service to Indiana University School of Medicine during a retirement reception—fittingly coinciding with the 75th anniversary of D-Day. A long-time courier for the Department of Radiology and Imaging Sciences, Depres has always had a handshake to offer or a story to share with faculty and staff.

From serving three years as a United States Marine to leading Ben Davis to a championship in high school golf, Depres has always led his life to the fullest—his work at IU School of Medicine serving as a constant reminder to those around him that retirement is only the beginning of another chapter.

“He always offers a bright smile, encouraging words and a good laugh,” said Bart LeFan, vice chair of Clinical and Academic Administration for the department.

After originally retiring in the late-1980s from a career as a teacher, it didn’t take long for Depres to become restless and feel a growing desire to find something else to look forward to.

“I was skimming through a newspaper when I saw an ad from a company in my neighborhood looking for a courier,”Depres said. “Not long after the interview, I got a call with a job offer.”

After eight years with the company, Depres’ boss got a new job working with IU. The other company was set to close its doors soon, but fortunately, Depres’ boss was able to get him a job with IU, too. For the next nearly 20 years, Depres worked as a courier with the Department of Radiology and Imaging Sciences.

“Through the years, I’ve discovered that even with retirement it’s important to have plans; to have something to look forward to,” Depres said. “Everyone already has the skills to do anything they want.”

While Depres’ courier expertise will be deeply missed, LeFan said his kindness and joy have positively impacted faculty and staff alike, inspiring others to constantly be their best.