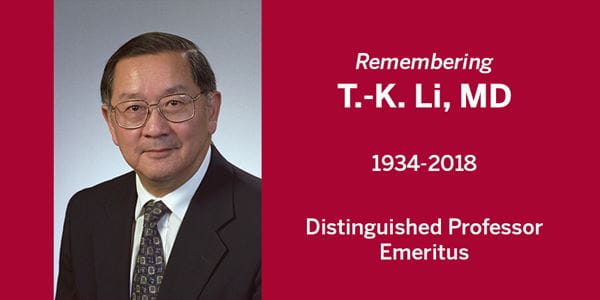 Ting-Kai Li, MD, an Indiana University Distinguished Professor Emeritus and former director of the National Institute on Alcohol Abuse and Alcoholism, passed away on Sunday, November 18 at age 84.

David Crabb, MD, David A. Kareken, PhD, Howard Edenberg, PhD, Janice Froehlich, PhD, William McBride, PhD, and Sean O’Connor, MD—all current or former leaders of the Indiana Alcohol Research Center at IU School of Medicine—shared their thoughts about Dr. Li’s impact on Indiana University, the study of alcoholism, and the careers of those he helped mentor.

The research community at Indiana University grieves the death of Dr. Ting-Kai Li.

Dr. Li (T.-K. to all who knew him) was born in Nanjing, China in 1934, the son of a Chinese ambassador. He left war-torn China, ultimately resettling in South Africa. Dr. Li attended the University of the Witwatersrand, Johannesburg, South Africa, Northwestern University, and received an MD from Harvard in 1959. He trained at the Peter Bent Brigham Hospital, where he served as chief resident. He did four years of post-doctoral research and was an associate in medicine at Harvard for three years, and worked at the Nobel Medical Institute in Stockholm.

After two years at the Walter Reed Army Institute of Research, Dr. Li was recruited to IU, where he established a thriving group of researchers devoted to understanding the biological bases of alcoholism. He served as the associate chief of staff for research at the Indianapolis VA, the associate dean for research at IU School of Medicine, and was named a Distinguished Professor in 1985.

Dr. Li was a member of the American Society for Clinical Investigation, the Association of American Physicians, and the Institute of Medicine, and was honored with the Research Society on Alcoholism Award for Research Excellence, the Isaacson Award for Research in Chemical Dependency, the Jellinek Award, the W. George Pinnell Award for Outstanding Service (to IU), and the Glenn W. Irwin Jr., MD, Distinguished Faculty Award, as well as many others. He served as the president of the Research Society on Alcoholism and the editor of its journal, Alcoholism: Clinical and Experimental Research.

T.-K. had a vision that went years beyond the visions of others. He realized the importance of genetics in alcoholism and in having suitable animal models for studying this disease; his colony of alcohol-preferring rats has been recognized worldwide as the best animal model of alcoholism. This research has helped dispel some of the stigma associated with alcohol use disorders and facilitated the development of medications for alcohol abuse.

He led the NIAAA in promotion of public health measures to reduce risky drinking. He was instrumental in founding the Indiana Alcohol Research Center and the Collaborative Study on the Genetics of Alcoholism, which continue his work.

His legacy also includes his wife Susan and children Jennifer and Karen, six grandchildren, and a score of researchers at IU who thrived under his sometimes stern mentorship, but always warm friendship. His contributions to the growth of biomedical research at Indiana University cannot be overstated; he was one of the most influential scientists in the alcohol research field in the world.

Many scientists, both in the United States and abroad, attribute much of their research success to T.-K.’s support, encouragement, and vision. He will be universally missed.

In lieu of flowers, the family suggests that memorial gifts be made to the T.K. Li Chair in Medical Research at Indiana University School of Medicine.

You may also make donations online at medicine.iu.edu/give.