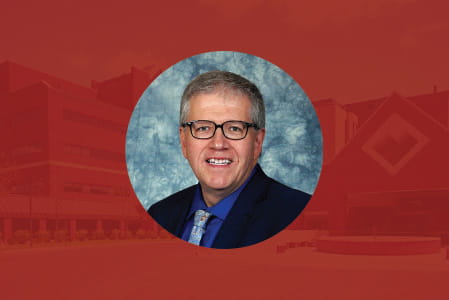 Matthew Neal, MD, assistant dean for Faculty Affairs and Professional Development at IU School of Medicine, gains his greatest satisfaction in helping students, residents and early career physicians achieve their goals. As a faculty member at IU School of Medicine-Muncie, Neal exhibits a passion for medical education and a dedication to the IU School of Medicine community. His many extraordinary career accomplishments have not gone unnoticed, even at the national level.

On April 23, Neal will become a Master of the American College of Physicians (ACP). In the 103-year history of ACP, there have been only 24 other Masters selected from Indiana (all from Indianapolis). Nomination for the ACP Mastership is a completely confidential process taken on without the candidate’s knowledge, and less than 1 percent of ACP members nominated are elected to receive a Mastership.

“I am both honored and humbled to be part of this select group,” said Neal.

ACP Masterships are selected based on “integrity, positions of honor, eminence in practice or in medical research or other attainments in science or in the art of medicine.” In a statement made by the national organization, ACP affirmed that Neal “reflects these qualities, having served in clinical and educational leadership positions at IU Health-Ball Memorial Hospital, serving the Indiana Chapter of ACP as Governor and on multiple local and national ACP committees over the years.”

Neal became an ACP member in the late 1980s while he was an internal medicine resident at IU Health-Ball Memorial Hospital. Discussing his ACP membership, Neal stated, “ACP has been my major professional home and offers so many things for physicians such as educational materials, financial/practice resources and opportunities for health care advocacy and leadership.”

The experiences and opportunities he receives from ACP are invaluable and have allowed him to advance his career not only in medicine but in the public sector as well, where Neal regularly visits Washington, D.C., as part of ACP’s advocacy program to promote important health care initiatives to Congress.

Five years ago, Neal became an assistant dean of Faculty Affairs and Professional Development with FAPDD.

“What I enjoy most about working with FAPDD are the amazing colleagues and the opportunity to help others achieve their goals,” he said. This position has also helped him achieve his passion of helping “physicians learn leadership principles and improve their medical writing and publication skills.”

When asked about his motivation to continue his career at IU School of Medicine, Neal stated: “IU School of Medicine consists of an amazingly diverse group of individuals, and I learn from my colleagues constantly. I am someone who desires intellectual challenges, and I definitely find them here.”

Learn more about ACP and how to become a member.