“We give because we believe in you” 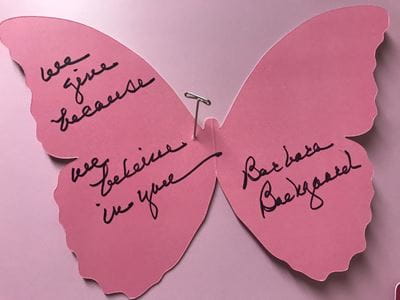 As longtime supporters of breast cancer research, Barbara Baekgaard and Patricia Miller have seen their share of reports from Indiana University School of Medicine on progress toward a cure.

But last week’s Breast Cancer Science Social, a first of its kind event, offered the Vera Bradley co-founders, and other supporters of breast cancer research, a different kind of update – a chance to tour the labs, see where the research is being done and hear firsthand from the scientists conducting the studies. 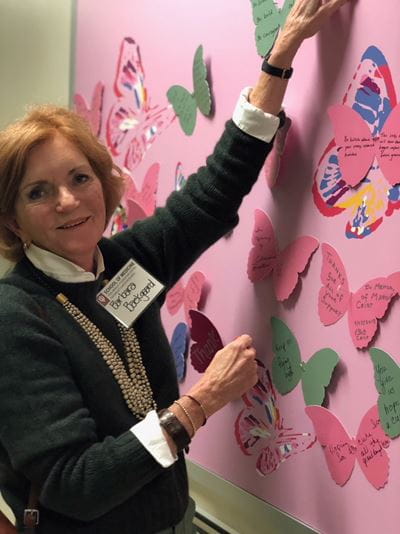 “We know they are real people,” Miller, an IU alumna, said after the tour. “To get to be in their labs and get to hear the doctors talk about their research – it’s very personalized, and that’s very satisfying.”

The event gave visitors a chance to leave researchers with reminders of loved ones lost to breast cancer and thanks for years added to lives because of advances in treatments. Some left pictures, some poems. Many inscribed words of encouragement on paper butterflies that the researchers can see each day as they pass through the IU School of Medicine labs. The labs were recently dedicated as the Vera Bradley Foundation Center for Breast Cancer Research in recognition of the more than $37.5 million in philanthropic support the Vera Bradley Foundation has given.

“We give,” Baekgaard wrote on a butterfly, “because we believe in you.” 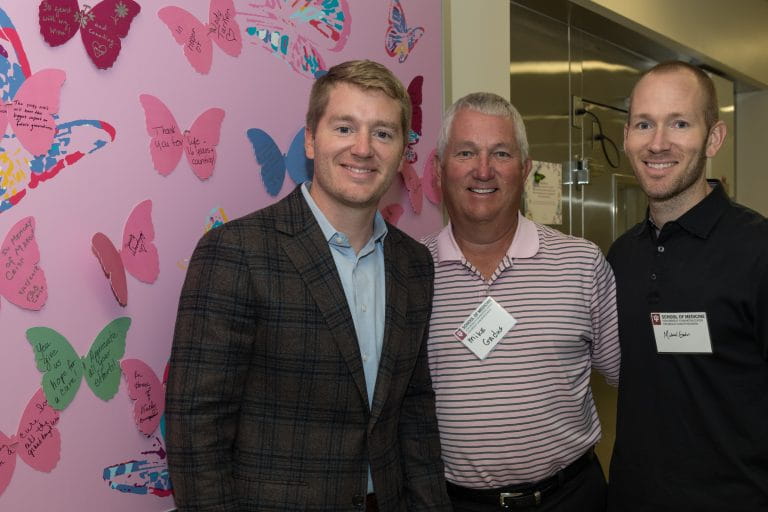 The message on Matt Gadus’ butterfly was one he had printed on pink wristbands when his mother Mary Beth Gadus was still alive and in the midst of her 28-year fight against breast cancer. They were words he thought captured some of his mother’s best qualities.

“Be positive. Be kind. Be selfless. Spread hope. Be MB.” The last being a reference to her initials, by which Mary Beth was known as a girl.

Matt and his brother Michael, along with their father Mike, left butterfly messages behind. Mike’s referenced the IU School of Medicine program Mary Beth started, 100 Voices of Hope, which funds research “hunches” that need support to get further exploration.

Michael Gadus said it is important to carry on his mother’s legacy and “to fuel and fund the ideas – even the crazy ones – ideally to have no idea go unfunded.” 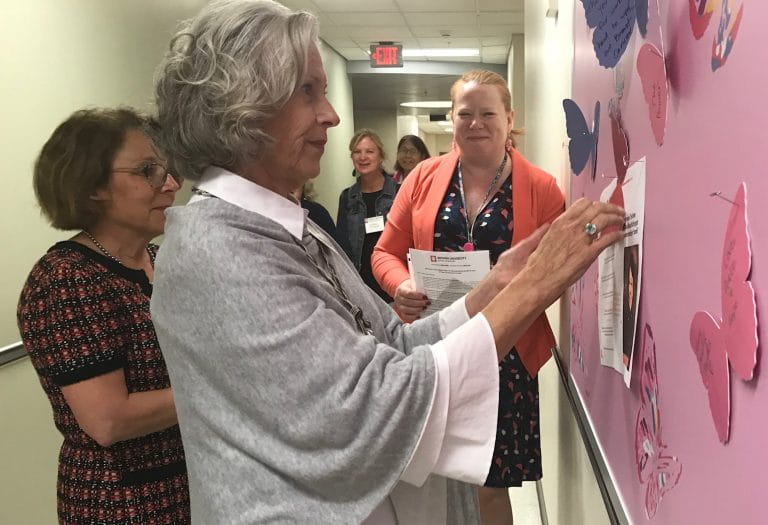 Connie Rufenbarger knows what it’s like to turn a new idea to fight breast cancer into reality.

She and Anna Maria Storniolo, MD, an oncologist and professor of clinical medicine at the IU School of Medicine, co-founded the Susan G. Komen Tissue Bank at the IU Simon Cancer Center.

Rufenbarger posted a poem, a picture of Storniolo and a butterfly bearing the simple message: “Big Job! Big Heart!” Rufenbarger is herself a breast cancer survivor, but she tends to move quickly past her story.

“I am an advocate and an activist,” she said. “One of the things you learn early when you are doing that is it is not about you. It’s not about me. At all. I very seldom discuss my history.”

Her picture of Storniolo, a nationally recognized leader in oncology, is accompanied by a quote from the doctor that sums up the purpose of the healthy tissue bank: “The beauty of this is it’s a straightforward idea: to understand abnormal, you have to understand normal.” 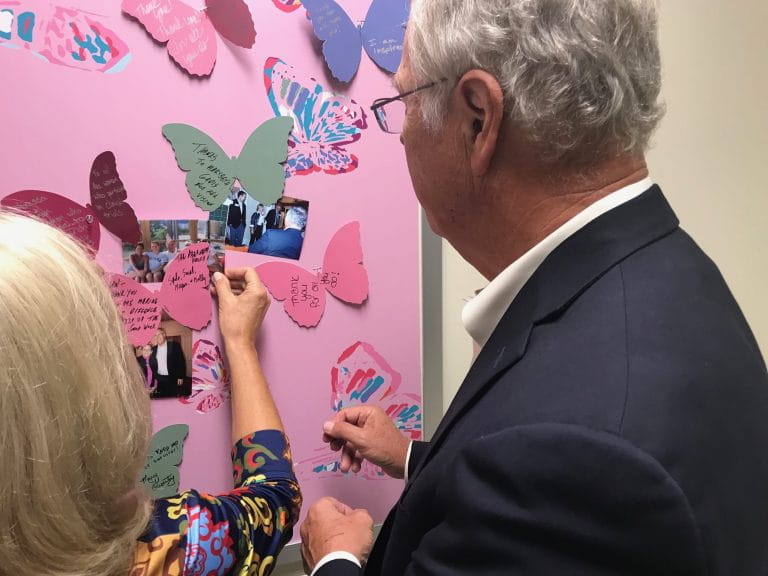 Nearby, Spike Abernethy left several photographs of his own – of his family, and especially of his late wife, Anne, who fought breast cancer for 5½ years before her death in 2013.

Anne kept a picture on her dresser of the IU researchers she knew were searching for treatments that might not save her, but could someday help other women.

The picture gave her hope.

One of those researchers, Milan Radovich, PhD, has kept a picture of Anne in his lab for years – a reminder of the people he’s working to save. He still has the picture. But now, he has new photographs along with a butterfly message from Spike: “Milan, Thank you. You are making a difference. Keep up the good work.”

For IU School of Medicine Dean Jay Hess, MD, PhD, MHSA, the work going on in the cancer labs is of professional interest – and a personal one. Hess lost his mother, Geraldine Hess, to breast cancer when he was still in college. Her suffering inspired him not only to become a doctor but to become a scientist who could transform health care.

Addressing breast cancer research supporters during the Science Social, Hess expressed optimism about the work toward a cure being done at IU. He expressed a similar message on the butterfly he pinned to the wall of the laboratory.

“Remembering you Mom! Miss you! We’ve come so far, and have just a bit farther to go.”