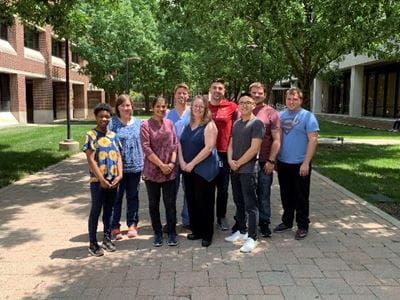 The Kacena lab crew that will be participating in the research at Kennedy Space Center has been assembled and is now looking forward to the next phase of Cell Science-02 (that is the study’s official NASA name).

For the last several months, the Indiana University scientists have been reviewing and training on Assembly, Test and Operations Procedures (ATOPs), preparing supplies for shipment to Florida and stabilizing other research projects for while they are away.

On July 9, nine members of the Kacena Lab will move 1,035 miles south in anticipation of preparing the actual cells for launch and two weeks in orbit.  Four of the team members (Dr. Kacena, Rachel, Ushashi and Ola) will be flying into Orlando, renting a car, and then driving to Cape Canaveral to arrive in time for a mid-morning training session followed by a full day in the lab—unpacking, setting up, preparing reagents and reviewing schedules and procedures.  The other five researchers (Zach G, Alex, Sunny, Anthony and Zack C.) will be driving for 15+ hours to Kennedy Space Center to meet up with the others for training on July 9.

Although the days in Florida leading up to the launch will be long and involved, everyone is hopeful that there will be some opportunity to relax at the team hotel, International Palms Resort, Cocoa Beach.