From My Eyes: Alex Brinker 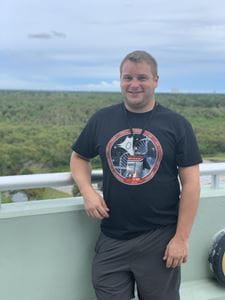 Participating in the research at NASA is a once-in-a-lifetime opportunity; however, I was fortunate to go twice.

After our first mission, RR-4, I thought nothing could top the experience. I was wrong. Being able to directly participate in something so complicated, from both an engineering perspective as well as biological perspective, is so rewarding. I gained an incredible breadth of knowledge through our research as well as a tourist of Kennedy Space Center.

During our first mission, we were shown around KSC and went on a wildlife tour. The behind the scenes tour was great, and it was hard to imagine what could top that. This time around, we went on a similar tour, but it was much more in-depth and full of interesting facts and sights.

We were awarded a few much-needed days off, which were spent on the beach and cooling off in the water from the hot Florida sun.

If you were to ask a close friend or family member about my previous vacations, they would all say that I am one of the most prone to having an accident. So, it seems fitting that I would have one on this trip, as well. Coming in from the ocean I hit my head which necessitated an ER visit. Fortunately, I had three other IU lab members with me for support. While I was OK and did not need substantial treatment, I am thankful they were by my side through the injury and in the lab at KSC. This is one of the many memories of our research trip that I will reflect fondly upon!

We still have more to look forward to when the research is returned to us. But for now, the excitement of the trip still resonates within me.