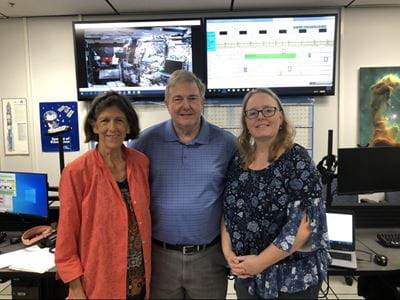 There are numerous command centers at each NASA facility. The command center at Kennedy Space Center we are using is a 20-foot by 20-foot room containing seven computer stations with two large monitors, as well as four large monitors at the front of the room.

The photo above shows our room; pictured are our Department of Defense Space Test Program colleagues Carolynn Conley and Jim McLeroy and myself after we finished monitoring crew activities. The large screen behind on the right displays our CS-02 activities timeline as well as those of the other crew members.

For monitoring our payload, the three of us have our own separate work stations where we can hear everything being said from all control centers communicating with the astronauts. NASA Ames personnel are communicating directly to the astronauts as they complete our tasks. There are crew procedures that were written specific to our study which the astronauts have copies of and which are read aloud step by step.

We have video to monitor their performance, and if we see something that was missed, we communicate with the NASA Ames personnel who then communicate to the astronaut about any modifications that need to occur. This is why I was needed for these real-time decisions, as it needs to be someone familiar with all of the science activities to determine whether changes are needed.

While the astronauts and NASA Ames personnel all did a great job, there were a few items that were identified and corrected. As with most things it is always best to have several sets of eyes on things as everyone sees things a bit differently and picks up on different things.