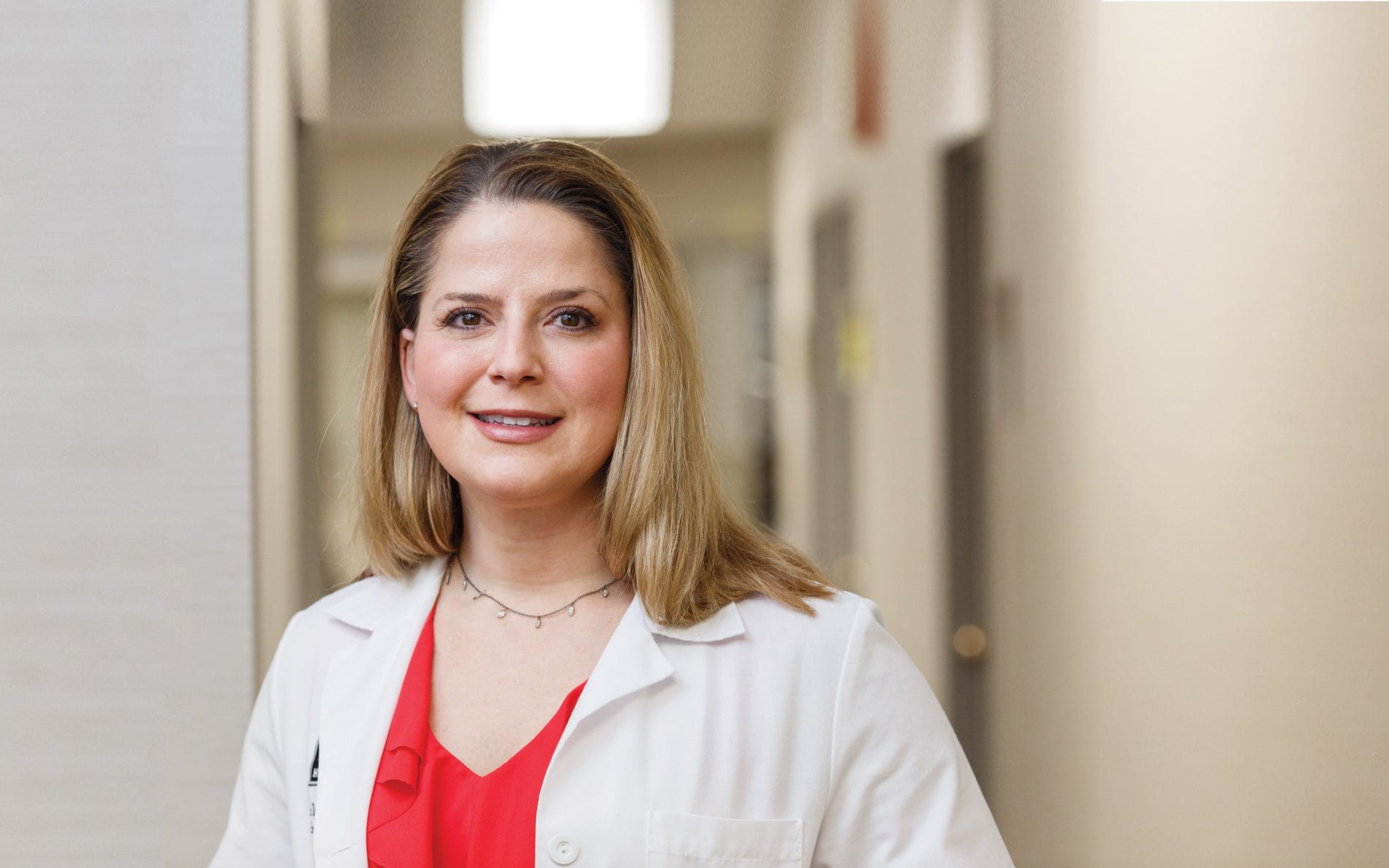 Portrait of IUSM Dr. Amy Krambeck in a clinical setting at the Methodist Professional building on Tuesday Janueary 23, 2018.

AMY KRAMBECK, MD, is one of the world’s leading experts when it comes to the treatment of kidney stones, and she brings to her job a genuine understanding of the pain her patients are forced to endure. “I’ve had a stone during pregnancy and I’ve also had children, and I’ll tell you, the stone was way worse,” she said.

So in addition to helping patients manage kidney stone disease, Krambeck, a professor of urology at Indiana University School of Medicine, is actively researching why stones develop in the first place and how to prevent them.

It’s a timely topic. The prevalence of kidney stones is on the rise, with more than 22.1 million cases reported worldwide in 2015.

Humans have been battling kidney stones throughout history, with evidence of treatment going back to ancient Mesopotamia and stray stones turning up in the pelvises of Egyptian mummies. They are notoriously painful, with even the driest medical literature using phrases like “excruciating,” “agonizing,” and “worse than childbirth.”

Stones occur when minerals and salts from inside the kidney clump together, forming hard deposits. They have many causes, ranging from genetic disorders and obesity to dehydration and taking certain medications. Krambeck’s research specifically focuses on the pathogenesis of stone disease. The hope is that by understanding precisely what promotes the formation of stones, researchers can then discover how to interfere with that process and disrupt it.

“Most people would never form a stone because the urine passes out of the kidney too quickly,” said Krambeck, who was recruited to Indiana University School of Medicine from Mayo Clinic in 2016. “So even though their urine is capable of forming crystals, it shouldn’t sit there long enough for those crystals to form into full stones.”

Krambeck is zeroing in on precursor lesions that develop in the kidney as a possible culprit. One theory is that these lesions provide something the minerals can cling to.

“We’ll find these microscopic, tiny stones embedded inside of the kidney in the ducts that are supposed to create urine,” she said. “So the stones, we believe, either started there, grew bigger and came out, or the crystals attached to those sites.”

Krambeck, who grew up in a tiny farming town in Missouri, first became interested in urology as a medical student at the University of Missouri. She was drawn to surgery but also wanted the opportunity to have long-term, meaningful relationships with patients. Urology seemed to strike the right balance.

“That’s why I love stones,” she said. “I’m not just surgically removing a stone. There’s a lot of primary care involved where you try to figure out exactly what’s going on and treat it.”

She completed her residency at Mayo Clinic and an endourology fellowship at IU School of Medicine and the Methodist Institute of Kidney Stone Research before serving on the faculty of Mayo Clinic for seven years. But IU—and the opportunity to practice at IU Health—lured her back.
IU Health Methodist Hospital is one of the highest-volume kidney stone centers in the United States.

“What drew me to IU really was the opportunity at this hospital,” Krambeck said. “Having done a fellowship here, I knew how innovative the operating room was, and the hospital, and the people that work here. I would be able to try new equipment, try new procedures, and really expand my research. I’m very grateful to be here in Indiana. I think it’s an amazing opportunity and I’m thankful that I could come and be a part of this program. I think there’s so much to offer here.”

When not tackling kidney stones, Krambeck also treats benign prostatic hyperplasia, also known as enlarged prostate. She is one of the few doctors in the United States who performs Holmium Laser Enucleation procedures, a minimally invasive treatment to remove obstructive prostate tissue.

Krambeck holds the Michael O. Koch Chair in Urology. Established in 2014 by Indiana businessman and IU alumnus Donald C. “Danny” Danielson, the chair is named for Michael Koch, MD, the chair of the Department of Urology who successfully treated Danielson for bladder cancer. Although Danielson has since passed on, his philanthropy has helped make Krambeck’s work at IU possible.

“Patient gratitude and philanthropy allow us to do what we do,” Krambeck said. “I have my research time because Mr. Danielson gave that money. It’s allowed me to continue research, to continue to help more people, and to advance the field.”