From his days at IU School of Medicine to leading the nation’s largest research hospital, James Gilman has spent his career overcoming obstacles to offer care. 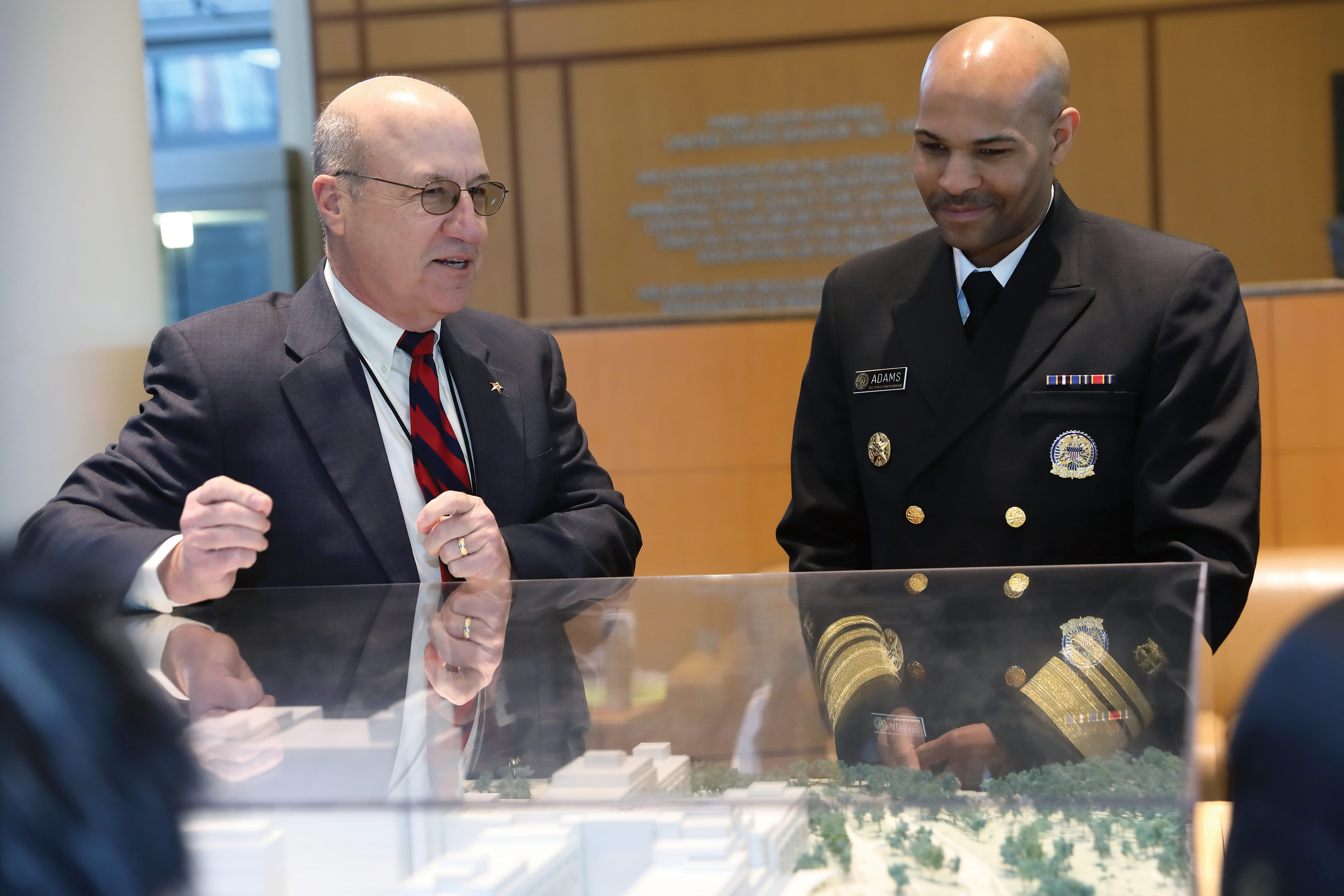 MOST OF us can remember a moment in 2020 when it really sank in: the novel coronavirus dubbed COVID-19 would not be neatly contained. It had escaped into the wider world, and things would never be the same.

For James K. Gilman, MD, chief executive officer of the National Institutes of Health Clinical Center, a former Army doctor with 35 years in the military, and an IU School of Medicine alumnus, that moment came last March.

The NIH had been monitoring COVID-19’s spread in China, then on the cruise ship Diamond Princess. The center’s personnel began training on how to put on and work in personal protective equipment.

“We started getting ready for COVID-19, but it was still kind of existential. It was kind of ‘we might have to deal with this, but it’s not on our doorstep,’” Gilman said.

Soon after, cases began popping up in New York City. And then along the coasts.

“I was out with my family and I got this ‘distress signal’ from my chief medical officer, who said: ‘This stuff is escaping. This is now out in the community. This is going to start going fast, and we need to shut down everything elective,’” Gilman recalls. “And basically, within 24 hours, I put out the word and things began to shut down.”

Gilman ran the largest research hospital in the world. It was a decision mirrored by hospitals across the country.

Part of the larger NIH headquarters in Bethesda, Maryland, the NIH Clinical Center isn’t your typical hospital. There’s no billing department. And it’s small compared to a regular hospital, with only 200 beds. That’s because everyone there is part of an NIH research protocol designed to further our understanding of medicine, disease and the human body.

“We deal with a lot of people who have horrible diseases; the way we describe it is that rare disease and refractory diseases are our specialties,” Gilman said. “You don’t come here to get your hypertension treated. We see a lot of cancers, a lot of bad immune deficiency problems, a lot of genetic disorders, things like that. We do a lot of first-in-human protocols, people who have no other options. We’re their last hope.”

AS CEO, Gilman oversees the Clinical Center’s day-to-day operations. Even without a raging pandemic, it’s no small task. The NIH has 27 different institutes and centers, 17 with some clinical presence. In a normal year, the Clinical Center handles approximately 6,000 inpatient admissions and 100,000 outpatient visits. The care and safety of those patients is what Gilman sees as the main goal of his job.

It’s been quite a career for someone whose love of problem-solving originally steered him toward engineering. Gilman, a native of Hymera, Indiana, graduated from the Rose-Hulman Institute of Technology in 1974 with a degree in biological engineering. The pull of helping other people led him to medicine, and he enrolled at the IU School of Medicine’s Terre Haute campus, earning his medical degree in 1978.

At the time, the Terre Haute campus was downright tiny, with only 16 students in the class.

“We all had lunch together, we would go to the arena on the ISU campus and play basketball together,” Gilman recalls. “There was a really, really high degree of togetherness.”

Even when Gilman and other students moved to the Indianapolis campus to continue their education, bonds built in Terre Haute kept them close. One of the Terre Haute classmates who kept in touch with Gilman through the years is James Stephens, MD. Even in the early days, he remembers Gilman as a problem-solver.

“Jim was always able to get to the root or core of the problem when we were struggling with something,” Stephens said. “We all frequently studied together, and very often it was Jim who took the lead on the discussions.”

For the next 35 years, Gilman would continue taking the lead and solving problems as a doctor in the U.S. Army, overseeing the health of soldiers and their families. He led Army hospitals such as the Walter Reed Health Care System in Washington, D.C. and Brooke Army Medical Center in Texas. When he retired from the Army in 2013, Gilman was Commanding General of the U.S. Army Medical Research and Materiel Command in Fort Detrick, Maryland.

The leap from a lifetime working in military hospitals to NIH research might seem jarring. For Gilman, the two worlds aren’t as different as they might appear.

“In the Army, those people were doing something for all of us with their military service, their willingness to go into horrible places and risk horrific injuries. They ought to be getting really, really good care, and my job was to make sure that they were,” he said.

“If you volunteer to be part of an NIH research protocol, you’re kind of doing the same thing. Patients all come with the hope that if we have an intervention trial, they’ll benefit from the intervention, but we can never promise that. Frankly, there are times when it would be a lot easier for them to go home and give up. But they come here because we promise them that we’re going to study and learn something about their problem in a way that might be able to help someone else. They’re also doing something for all of the rest of us,” he said.

“So that’s the thing that ties the two parts of my career together. I think that people who are doing something for all the rest of us ought to get really great care.”

THROUGHOUT THE pandemic, Gilman has worked to ensure that his team is providing great care, and to protect patients and staff from the virus. Gilman has done that by listening closely to his epidemiologists, seeing that everyone at the Clinical Center gets tested, and ensuring that PPE is ample.

The approach has paid off. There was little transmission of COVID from patients to staff, and none from staff to patients.

Even so, Gilman says the world will never quite be the same as it was pre-COVID. Since Thanksgiving, he’s lost three close friends and family members to the disease. And that’s just a fraction of the toll. “We can’t lose half a million Americans and expect that we’ll be the same,” he said.

Still, Gilman is confident things like travel, concerts, and sporting events will one day return to normal, even if that means a new normal of masks, social distancing, and aggressive hand hygiene. And then there’s how much we will appreciate being with friends and family.

“I haven’t seen my grandkids in a year. In June, I drove 900 miles so I could give my wife a hug, then drove back,” he said. “I think we won’t take for granted the ability to be in the presence of the people we love.”