A solution to halting the spread of mosquito-borne illnesses might be found in kitchen pantries.

MOLLY DUMAN SCHEEL, PHD, has worked much of her career on wiping out mosquito-borne illnesses like malaria and dengue fever. Now, realizing that dream looks increasingly possible every day. Ever since Zika climbed from South America, through the Caribbean and into Miami residential areas in summer 2016, grant-awarding agencies have wanted to fast-track getting a mosquito-control solution to populations in need. The problem became urgent: Pregnant women were giving birth to babies with microcephaly, and the disease was discovered to be sexually transmittable. Scheel, an associate professor of medical and molecular genetics at Indiana University School of Medicine-South Bend, has become a go-to expert. For good reason. She and her team of collaborators, including several colleagues from the University of Notre Dame, have been studying how to use genetic engineering as a tool to control Aedes aegypti, a type of mosquito that transmits some of the most common and dangerous pathogens of human disease. Their research is leading to the development of a novel type of environmentally safe pesticide delivered in a surprising package— baker’s yeast.

The research centers around interfering RNA, or molecules that interfere with the expression of specific genes. Scheel’s laboratory pinpointed which genes should be targeted to kill mosquitoes, then identified the best type of interfering RNA to do the job. Importantly, the unique, custom design means it only affects genes in mosquitoes, not in humans or other species, mitigating the potential for unintended harm.

But that discovery only solved part of the problem. The next question was how to get the interfering RNA into the mosquitoes. The answer? Yeast.

Mosquitoes are naturally drawn to yeast. What’s more, yeast is relatively cheap, widely available and environmentally friendly. So Scheel and her team engineered baker’s yeast with the interfering RNA to create a new type of larvicide. They then processed the yeast into ready-to-use tablets.

“Yeasts have been cultivated worldwide for thousands of years, and this technology can be adapted to resource-limited countries with constrained infrastructures,” Scheel said. “Yeast is easily packaged and shipped, which will facilitate regional distribution.”

Scheel imagines a day in the not-too-distant future when people around the world will drop one of the yeast tablets into a container of water to attract mosquitoes. Pregnant mosquitoes will be lured in and lay their eggs there. Their larvae will consume and digest the engineered yeast, killing them before they ever have the chance to become disease-spreading adults.

The implications are enormous: Each year, mosquito-borne illnesses kill millions of people worldwide and sicken hundreds of millions of others. Not surprisingly, support for the idea has been tremendous. 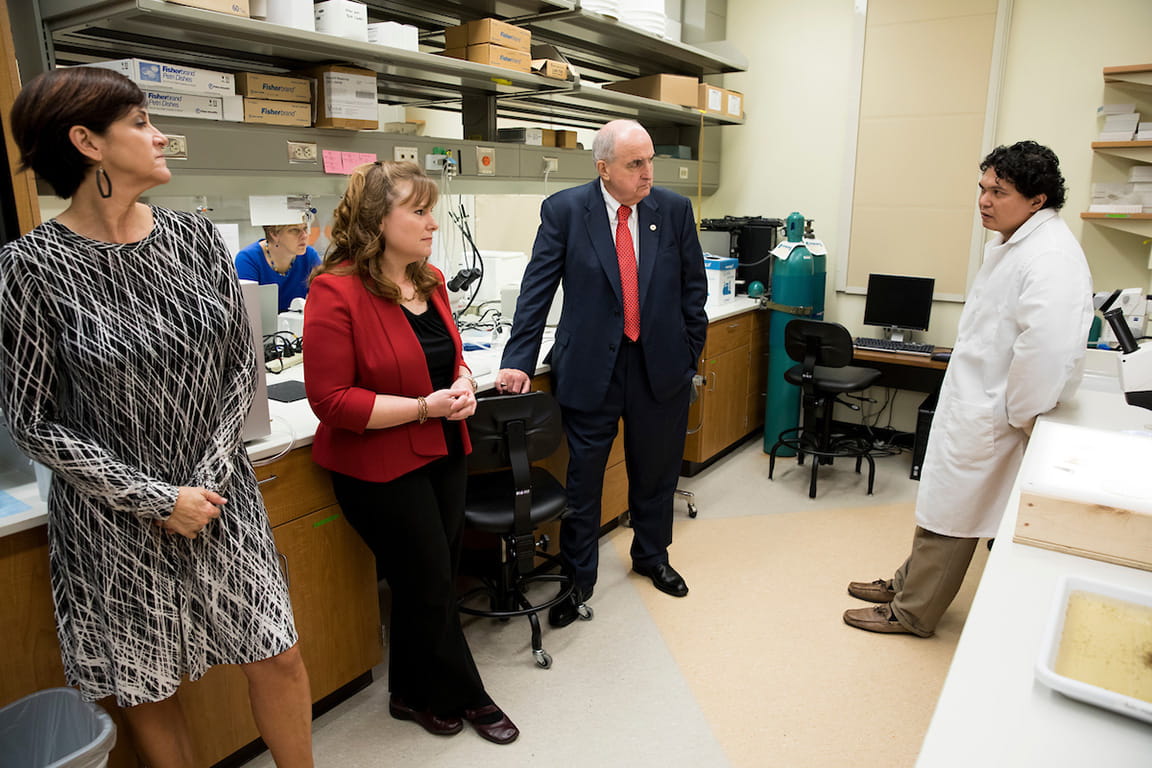 The team began developing the concept with support from the Bill & Melinda Gates Foundation in Summer 2015.

Concerned that existing mosquito control methods were meeting resistance and were not environmentally safe, the Gates Foundation sought economically viable and environmentally friendly solutions that could be introduced globally.

In summer 2016, USAID awarded Scheel $876,000 to help develop the pesticide. Department of Defense grants followed in 2017, as did funds from the National Institutes of Health. Each grant allowed the project to advance a step further.

“The interest the Department of Defense has in this project acknowledges the large number of military personnel, military support personnel and military family members who are deployed to areas where mosquito-borne illnesses are prevalent,” Scheel said. “Their exposure to Zika and dengue fever is ongoing. In the case of Zika, a troop’s potential to infect a spouse or partner is another level of concern.”

The NIH grant allowed the Scheel team to develop multiple versions of the yeast larvicide, an arsenal that may be effective across varied environments and that should be deep enough to provide alternatives if mosquitoes become resistant to some versions.

In addition to the availability of funds, Scheel said the group’s research benefits from the will of some of the funding organizations to commercialize a solution quickly.

USAID and Gates, in particular, are urging rapid development. Toward that end, USAID introduced the Scheel team to the Innovative Vector Control Consortium, which is helping her meet interested biotechnical commercial partners, refine the formulation process, conduct cost analyses and navigate the Environmental Protection Agency’s procedure for gaining regulatory approval for new pesticides.

January saw Scheel and her team in Trinidad, where they met with collaborators at the University of West Indies at St. Augustine and the Trinidad and Tobago Ministry of Health. In that tropical setting, where mosquito activity and subsequent diseases occur 12 months a year (unlike Indiana), they established a site for testing of the larvicides. Once they show the efficacy of the yeast larvicides under controlled conditions, full testing will ensue, likely within a year.

Although she continues to pursue other genetic strategies for reducing disease, she believes the promise of the larvicide to relieve human suffering is a solution within reach.

“It’s nice to have the potential opportunity to have this level of impact,” she said.