Putting a Stake in the Ground

The newly created Vera Bradley Foundation Center for Breast Cancer Research aims to tackle an aggressive form of the disease. 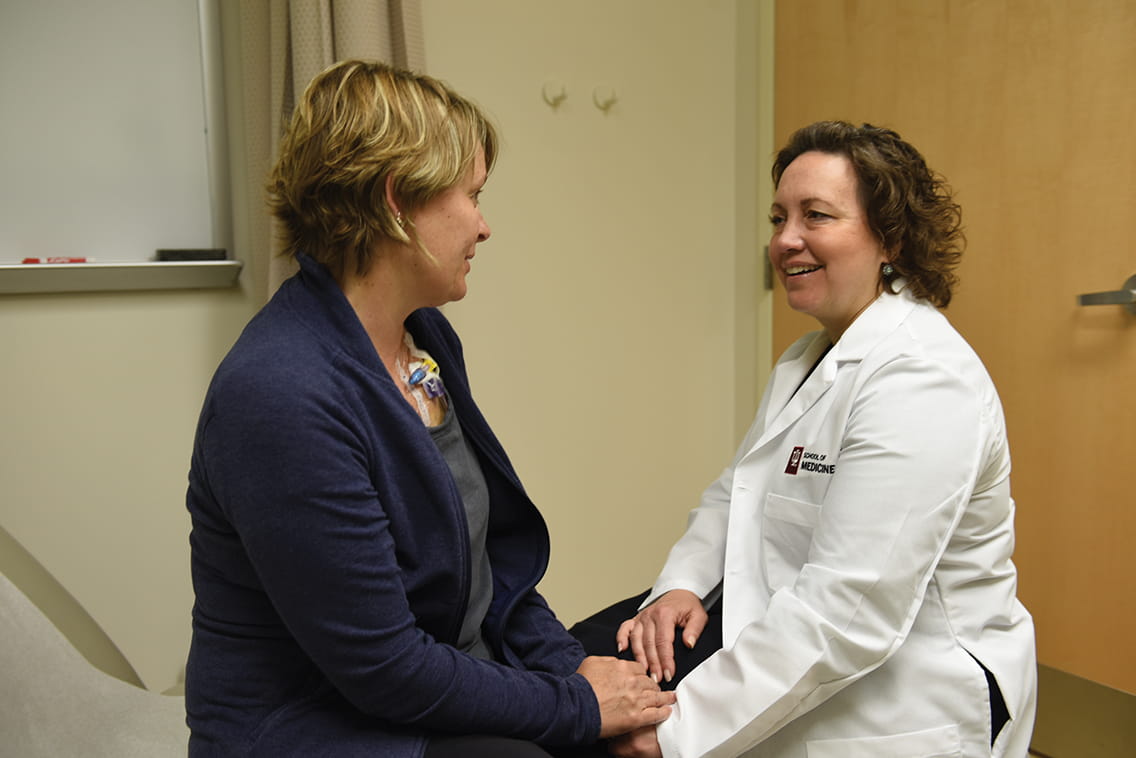 “While we have made major strides in the treatment of breast cancer, the reality is that today’s therapies are still inadequate,” said Indiana University School of Medicine Dean Jay L. Hess, MD, PhD, MHSA, who lost his mother to breast cancer when he was in college.

“Far too many women still die from this disease, and others endure long-lasting side effects from treatments. We owe it to women everywhere to do better.”

With that goal in mind, IU School of Medicine is launching a new research center focused on dramatically improving therapies for some of the most difficult-to-treat types of breast cancer.

The center will be named the Vera Bradley Foundation for Breast Cancer in recognition of two decades of philanthropic support from the Indiana-based handbag maker and its charitable foundation.

"With the establishment of this center, we are putting a big stake in the ground and redoubling our efforts to find solutions for these women," Hess said. "No one has done more to support breast cancer research in our state than the Vera Bradley Foundation for Breast Cancer, and I cannot imagine a more fitting namesake for our center.”

While the Vera Bradley Foundation Center will conduct research related to all facets of breast cancer, it will be highly focused on triple-negative breast cancer, said Anantha Shekhar, MD, PhD, executive associate dean for research affairs at IU School of Medicine.

Triple-negative breast cancer tends to be more aggressive and spreads more rapidly than other types of breast cancer, and it disproportionately affects younger women. It also has a higher Recurrence rate, and once it has returned, standard therapy is often ineffective.

“Right now, there is little we can offer women with triple-negative breast cancer that is specifically designed for their cancer,” Shekhar said. “It’s a huge challenge, but that makes this research all the more important. We can’t back away because this is tough. In fact, that’s all the more reason why we should focus on this disease.”

And the time is right to make this a top priority, he said.

A wave of scientific and technological advancements is enabling researchers to read each tumor’s genetic blueprint, providing clues about the specific mechanisms it depends on to grow and survive. This genomic information is used to develop precision therapies that attack the tumor’s unique vulnerabilities.

At the same time, physicians and scientists are learning how to train the human immune system to mount its own defense against cancer cells. While still in its infancy, immunotherapy has the potential to be the most promising new therapy in a generation.

Taken together, these two approaches could allow researchers to transform the treatment of triple negative breast cancer, Shekhar said. And IU School of Medicine intends to be at the forefront.

“Cure is a bold word. But we really believe this is possible. We don’t expect to eradicate all forms of triple-negative breast cancer in the immediate future, but we do  think we can identify subsets that are particularly vulnerable to these new types of therapies. And what we learn will help us continue to improve treatments for other women.”

The school has made substantial investments in equipment and talent as part of its Precision Health Initiative. And it is also launching one of the most ambitious longitudinal studies of triple-negative breast cancer. The school will create a biobank of tumor tissue and mine it for clues; collect health and other information from patients; and monitor long-term progress after treatment.

Shekhar said having these new tools in the toolbox “puts us in a prime position to make substantial inroads against triple-negative disease—and to potentially cure some forms of it.”

“Cure is a bold word,” Hess added. “But we really believe this is possible. We don’t expect to eradicate all forms of triple-negative breast cancer in the immediate future, but we do think we can identify subsets that are particularly vulnerable to these new types of therapies. And what we learn will help us continue to improve treatments for other women.”

As a first step, the school is undertaking a national search for the inaugural director of the Vera Bradley Foundation Center. The successful candidate will lead a team of approximately 30 highly skilled breast cancer researchers and recruit new talent to IU.

To attract an innovative leader, the Vera Bradley Foundation is committing $2.5 million to establish a new endowed fund that will fuel the director’s vision. As part of For All: The Indiana University Bicentennial Campaign, Indiana University will match the gift. In addition, Hess is committing another $2.5 million in school resources, bringing the total value of the fund to $7.5 million.

An Army of Supporters

When Patricia R. Miller and Barbara Bradley Baekgaard lost their dear friend to breast cancer in 1993, the co-founders of Vera Bradley determined they had to prevent others from suffering a similar fate.

A year later, the women—aided by a group of dedicated volunteers— hosted their first golf and tennis tournament in Fort Wayne, Indiana, to raise money for breast cancer research.

On June 4 of this year, some 1,000 guests gathered for the 25th annual Vera Bradley Foundation for Breast Cancer Classic—now the largest amateur women’s golf and tennis charity tournament in the country. It was there, under a tent decked out in Vera Bradley’s bold patterns and sprinkled with plenty of pink, that Hess announced the creation of the new research center to roaring applause.

While Miller and Baekgaard have not yet achieved their goal of ending suffering from breast cancer, the message that night was clear: IU School of Medicine researchers won’t stop until they get there.