Let's Do What We've Got to Do

Eamon Eccles faced his own mortality as a cancer patient. It taught the future physician a few things about empathy. 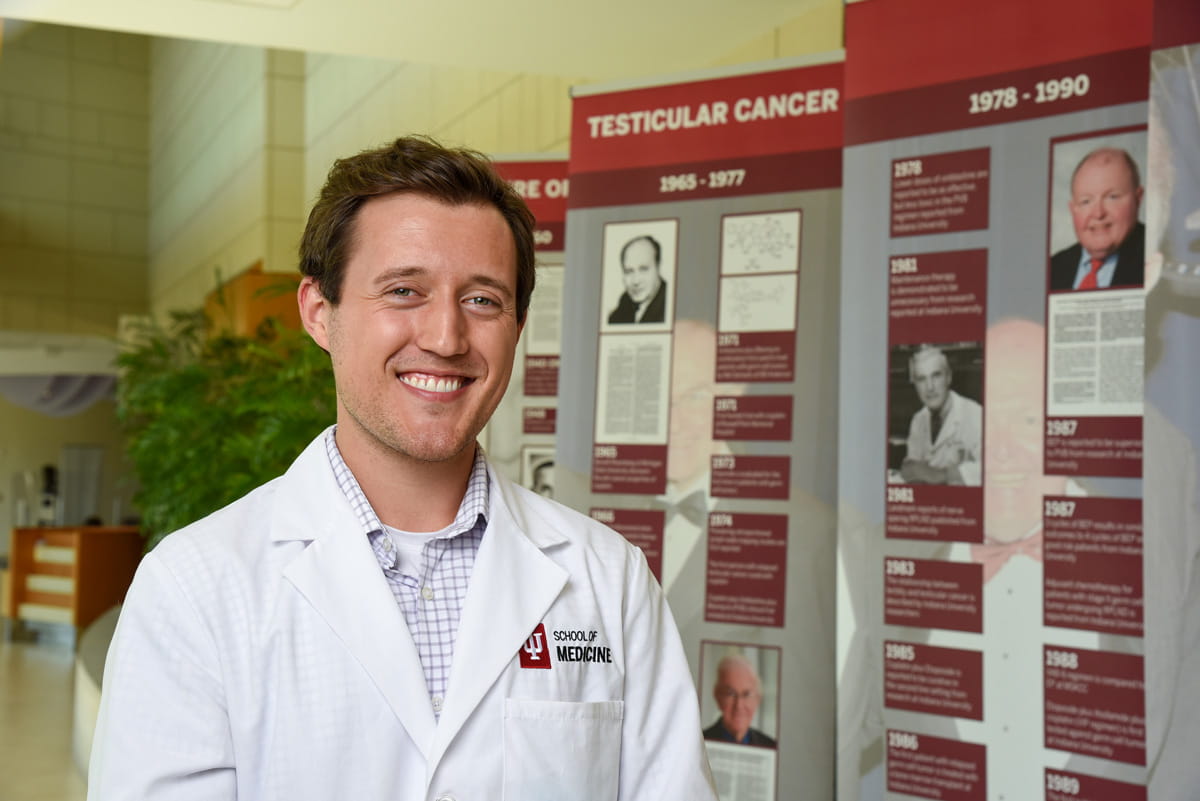 Eamon Eccles, a fourth-year medical student at IU School of Medicine, is now in remission from testicular cancer and plans to pursue hematology/oncology as his specialty.

EAMON ECCLES STOOD at the door of the exam room, momentarily frozen by a memory. His chest tightened. His pulse raced. Emotion flooded his body. Breathe, he told himself. Get it together.

A fourth-year medical student at Indiana University School of Medicine, Eccles was doing a clinical rotation at the Indiana University Melvin and Bren Simon Comprehensive Cancer Center. He was about to open the door, smile and greet a patient who would simply see him as another health care provider in a white coat.

To Eccles, the moment was so much more. Six years before, he had been on the other side of that door—where his patient now sat—waiting to see his own cancer doctor.

In 2007, when Eccles was in fifth grade, he lost two grandparents to different types of cancers—just one month apart.

“That was a really tough year for me and my family,” he said. “I thought, ‘I want to be a doctor to help people like my grandparents.’”

Monday’s passion for science was contagious—and Eccles quickly caught the bug. He became the first student at the school to take Advanced Placement Chemistry as a junior. By his senior year, there were no science classes left for him to take. And Monday wasn’t about to let Eccles sit in study hall.

“I went to the principal and said, ‘Let me have him. He can do things in the lab with experimentation,” Monday said. “He can go to the next level.’”

Monday strongly encouraged Eccles to go to Indiana University, major in a science field, and pursue a degree in medicine.

“He’s such a sharp kid. He’s just the epitome of a student. In addition to science and math, he had a grasp of the humanitarian issues—he just understood all aspects,” Monday said.

“Kids like that don’t normally have the ability to relate to people, but Eamon was the kind of kid that could make anybody feel completely at ease. He has a magical personality. I’ve never had a kid quite like that. I’ve had a lot of great kids and a lot of kids that went into medical school. By far, the most aware student I’ve ever had for absolutely certain is Eamon Eccles.”

ECCLES’ PLANS WERE unfolding nicely when he began his sophomore year at IU-Bloomington. He was pursuing a degree in biology. He was aiming to walk on to the golf team. And then he noticed it—a hard lump in his testicle. Eccles tried to ignore it first—but the pain began making it hard for him to exercise. He mentioned it to his parents. They immediately came to Bloomington and took him to a doctor.

Eccles was stunned to learn that the lump was testicular cancer.

In young men, testicular cancer is one of the most commonly diagnosed cancers. Decades ago, it was a death sentence. Today, thanks largely to the pioneering work of IU School of Medicine physician-scientists, 95 percent of all men diagnosed with testicular cancer are cured. At the time of his diagnosis, Eccles didn’t know that.

“I came face to face with my mortality. At the time, I thought I might die,” he said. “I remember my parents both started crying—and my dad does not cry. He’s a rural, southern Indiana, don’t-show-any-emotions guy. I just got very stoic, like ‘let’s do what we’ve got to do.’ It was really emotionally draining, especially at the beginning with so many unknowns.”

Eccles’ cancer was caught in an early stage. Bloomington urologist Paula Bunde, MD, an adjunct clinical assistant professor of urology at IU School of Medicine, performed surgery, and he was cured without radiation or chemotherapy. Eccles understands clearly: The surgery saved his life.

“She said, ‘Have you heard of Dr. Einhorn?’” Eccles recalled. “‘That’s who you’re going to be seeing up in Indy.’”

Eccles had heard of Lawrence Einhorn, MD. He developed a new “miracle drug” that, in 1974, cured a patient with advanced metastatic testicular cancer—a medical breakthrough. Eccles learned about Einhorn, and the chemotherapy drug cisplatin, as part of a specialized science elective he’d taken on biological processes in cancer drugs.

Eccles would see Einhorn at the IU Simon Comprehensive Cancer Center as part of a five-year surveillance plan to ensure his cancer did not return. It was a connection Bunde went out of her way to make happen.

“Eamon was just a really neat young man, and he expressed at the time that he was pre-med,” Bunde said. “I felt like this was a chance for this young, aspiring doctor to meet someone who is a pioneer in the field, and it would give him the chance to see if this is the thing he wanted to go on to do in the world.”

Soon, Einhorn would see some of the same qualities in Eccles that Monday had identified in high school.

“He was inherently bright,” said Einhorn, an IU distinguished professor, and professor of medicine at IU School of Medicine. “Eamon asked the types of questions a fellow would ask. I think the fact he had cancer made him a student of cancer. He expressed an early interest in medicine and oncology.”

The new patient-doctor relationship had the effect Bunde was looking for: It solidified Eccles’ interest in oncology.

“I’m thankful Dr. Einhorn didn’t send me to one of his colleagues. Dr. Einhorn is a prolific, big-name doctor. Many other colleagues could’ve taken what was essentially a well-visit,” Eccles said. “He let me shadow him. It was an incredible experience.”

After he graduates in May, Eccles, recipient of the Class of 1966 Dean’s Scholarship, plans to do a combined residency program in medicine and pediatrics. His goal is to follow that with a fellowship in hematology/oncology.

“The thing I’m most passionate about going into medicine is the human interaction—helping people walk through some of the worst moments in their lives,” Eccles said.

It helps that he’s been on their side of the door.