After Kent Brantly survived the Ebola virus, he shared his story with the world and built a quiet life back home. So, why is going back into global health? 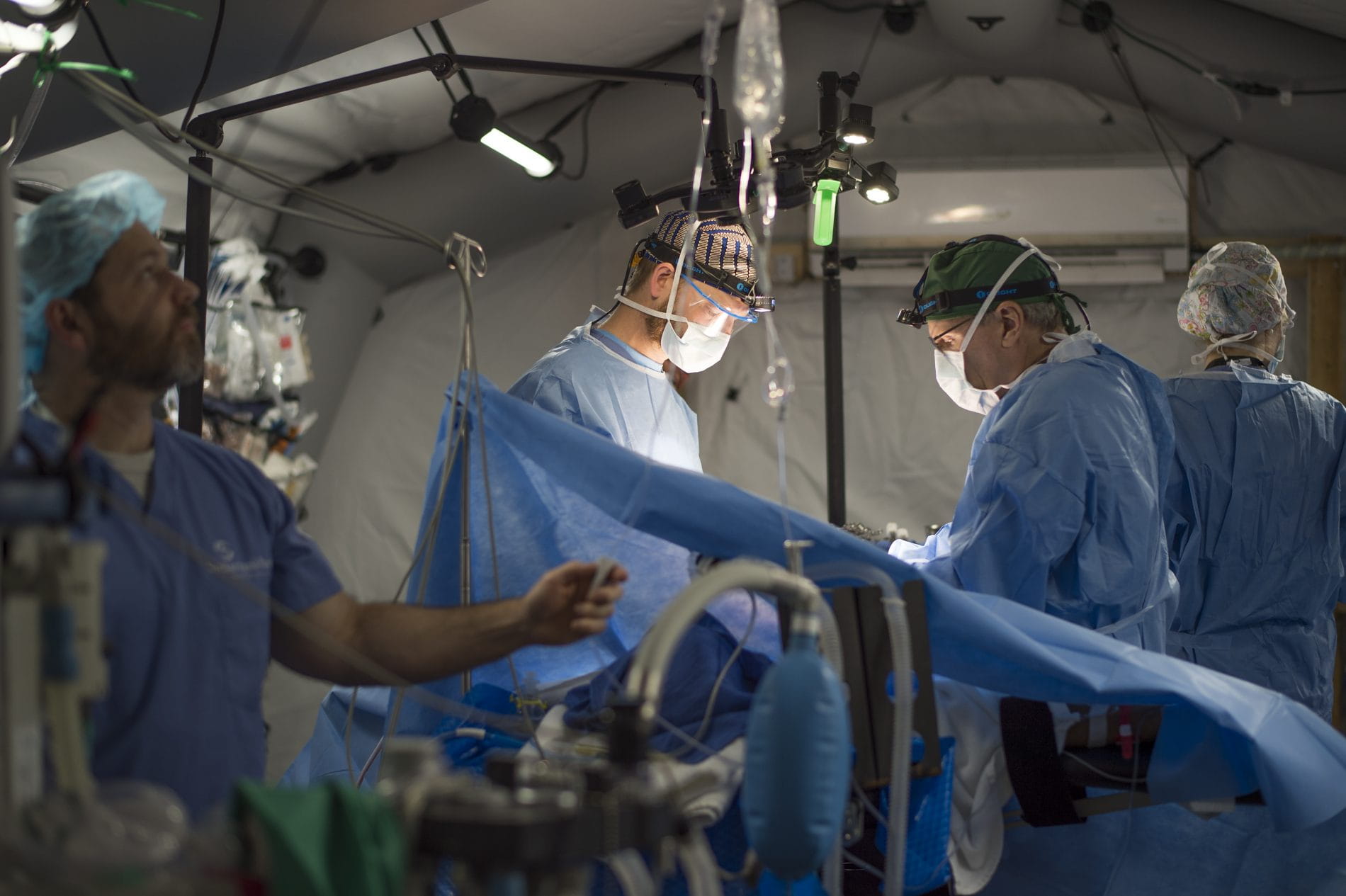 AFTER HIS near-fatal encounter with Ebola on a medical mission in Liberia, few people would question Kent Brantly, MD, if he contented himself with a stateside medical career, one where he put down roots with his wife and kids in the suburbs, and confined his adventures to storytelling.

That’s not anything close to what Kent Brantly has in mind.

Five years after contracting Ebola while treating patients in the worst outbreak of one of the world’s deadliest diseases, Brantly and his family are preparing to return to sub-Saharan Africa—to a rural outpost on the other side of the vast continent.

Brantly, a 2009 Indiana University School of Medicine graduate who currently works at a hospital in Fort Worth, Texas, plans to move with his family to the landlocked nation of Zambia. This fall he will begin a two-year stint with a Christian health organization at a hospital in a region where access to health care is limited.

Nearby, in the Democratic Republic of the Congo, an Ebola outbreak had killed nearly 1,700 people by July’s end and spilled over into neighboring Uganda. Even if Ebola never crosses the Zambian border, the menu of diseases already there is formidable—including malaria, typhoid and tuberculosis.

“That’s part of the realism we are taking into the move this time,” Brantly said. “We know that bad stuff like that can happen.”

REALLY BAD stuff began to happen in 2014, when Brantly was working with the Christian aid organization Samaritan’s Purse at a hospital in Monrovia, Liberia. Ebola first appeared in neighboring West African countries. Then Ebola patients began showing up at the hospital where Brantly was working, with their numbers growing to dozens over several weeks. Brantly donned protective gear and waded in to care for the sick. But with no vaccine or approved treatment in existence, there was little he could do beyond holding the hands of patients and singing to them in their final days.

All but one of his Ebola patients died.

Several weeks into the crisis, Brantly awoke one day feeling poorly himself. He stayed home from the hospital to let it pass, but he spiked a fever. He hoped it was “only” malaria. Further testing showed it to be Ebola. Along with the sustained fever, he began having trouble breathing. Brantly’s colleagues gave him a dose of the experimental drug, ZMapp, that had never been used in humans. Soon, he was evacuated to the United States and treated at Emory University Hospital.

As the first person with Ebola on American soil, Brantly was national news. Against the odds, his condition began improving. He left the hospital that August—five years ago this summer.

In the whirlwind that followed, Brantly met President Obama and was pictured on the cover of TIME magazine when Ebola fighters were honored as Person of the Year. With his wife, Amber, he wrote a book. They both appeared in a feature-length film about their experience, Facing Darkness, that was produced by Samaritan’s Purse. Brantly was even featured in an exhibit on outbreaks at the Smithsonian Museum of Natural History.

For two years, Brantly used his visibility as a platform to call for help for the people of West Africa and, as the Ebola outbreak subsided, to spread the message of choosing compassion over fear.

Brantly has done more than spread the message with words; he’s lived it.

He returned to clinical work, in Fort Worth, at the end of 2015, working in the county health system and teaching family medicine residents. But he has continued to venture far afield.

In 2017, he spent nearly two weeks at an emergency field hospital outside of Mosul, Iraq, where allied forces were attempting to drive ISIS fighters out of the city. There, he treated everyone from little girls hit by sniper fire to ISIS fighters themselves. As a physician, Brantly took on all comers.

“Our purpose for being there was to have compassion for people in need,” he said. “And those people take all forms and shapes and sizes. That includes that ISIS fighter who was injured in the explosion. He has a lot of the same needs as that little girl.”

EARLIER THIS SUMMER, Brantly took some of his residents on a short medical mission to Uganda.

Brantly had a strong sense of vocation—of a calling—from the time he arrived at IU, said Richard Gunderman, MD, PhD, who taught Brantly at IU School of Medicine.

Gunderman’s courses include one on spirituality and meaning in health care work. Brantly also regularly participated in Spirit of Medicine, a group of faculty members and students who talk about the intersection of faith and medicine. “He was asking, ‘How can I put my medical education and training to work for the sake of something beyond myself?’” Gunderman said.

Brantly feels compelled to take his skills and his family far afield for several reasons. One is his Christian faith: He feels called by God. Another is his chosen profession. “I became a doctor—I went to IU School of Medicine—to gain a skill set that I could use to serve people in great need.” He could keep doing that in Fort Worth, he acknowledges. But he says his current hospital won’t have any trouble finding a replacement for him. The people in Zambia can’t say the same.

Brantly’s work in Zambia will come under the auspices of the Christian Health Service Corps, to whom he’s made a two-year commitment—but one that’s open ended, meaning it could go longer. Another physician who happens to be Brantly’s first cousin will be moving his family there also. Brantly is grateful to have a partner he knows well.

Even so, this trip to Africa will be different because Brantly’s eyes are wide open. “I don’t have the same naiveté probably that I did moving my family to Liberia in 2013,” he said. “I’ve gained some real-life experience that takes away a little bit of the shine of the adventure.”

The instinct for self-preservation, Brantly says, is strong but he sees greater strength in interconnectedness. That has guided his decisions since leaving IU—to go to Liberia, to go to Iraq and to go to Zambia.

To learn more about how you can help IU School of Medicine improve global health, please contact Teresa Rhodes at terhodes@iu.edu or 317.278.0840. To learn more about Christian Health Service Corps, visit Healthservicecorps.org/author/Brantly