Why Does Kathy Miller Hate Pink?

For the breast cancer researcher, the color reminds her of the work IU School of Medicine still must do to turn breakthroughs in the lab into treatments for patients. 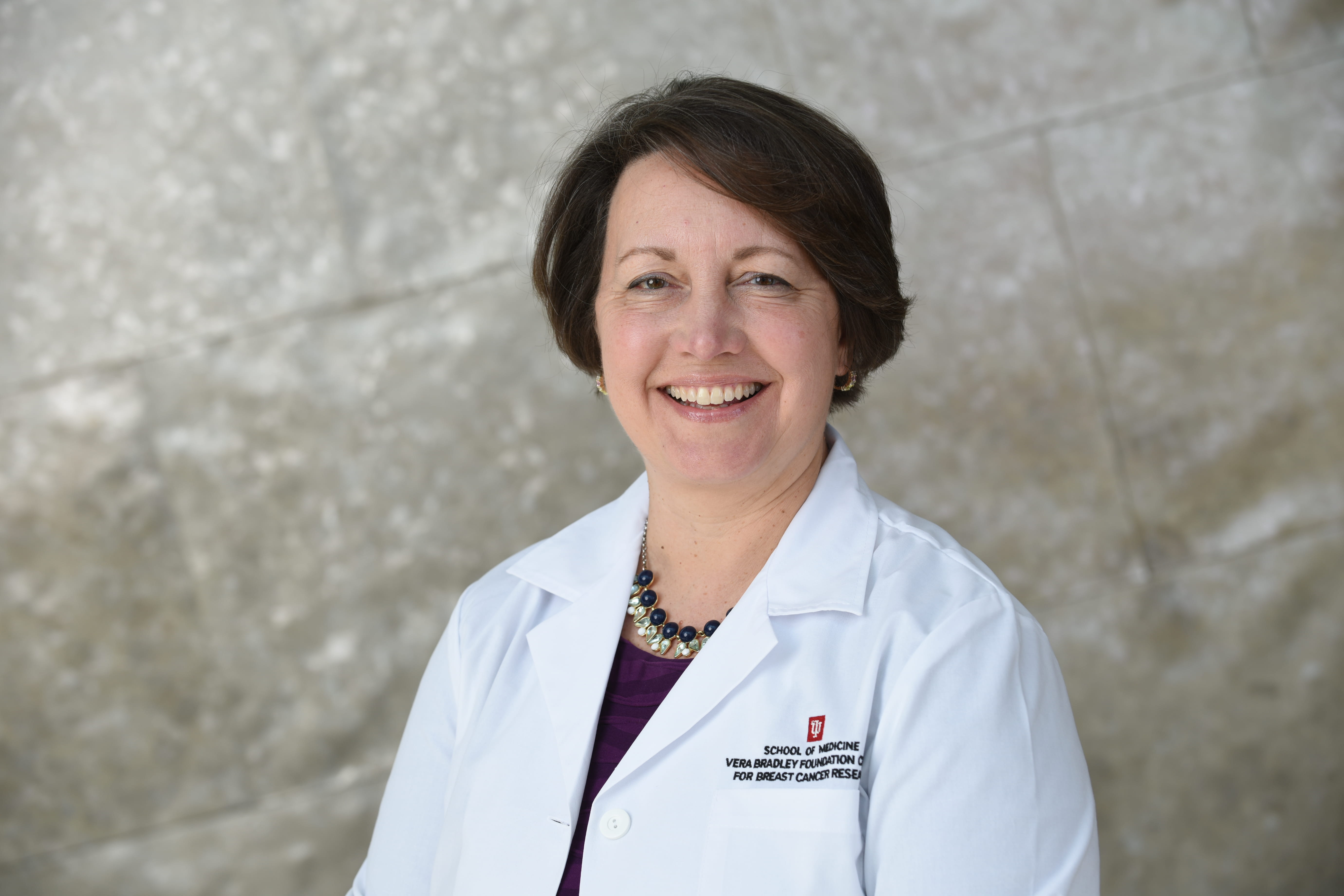 Kathy Miller has never tied a pink ribbon in her daughter’s hair.

Pink ribbons make her mad, you see. It’s not that she doesn’t like the color pink, or ribbons for that matter.

But Miller, the Ballvé Lantero Professor of Oncology at Indiana University School of Medicine and the associate director of clinical research at the IU Simon Cancer Center, is one of the nation’s leading oncologists. As such, her main occupation in life is ending breast cancer. Pink ribbons remind her that she hasn’t yet worked her way out of a job.

“I can’t put a pink ribbon in her hair without thinking of the mothers I’ve taken care of who are no longer with us, mothers who can’t put pink ribbons in their daughters’ hair,” Miller said. “As her mother, that makes me mad.”

That anger aside, Miller sees hope. After more than 20 years of researching and treating breast cancer in the Vera Bradley Foundation Center for Breast Cancer Research, Miller knows how far breast cancer treatment has progressed. The advances coming in the next 20 years? Miller is busy imagining the possibilities.

Miller was raised in Florida—Florida, Ohio. It’s a town of fewer than 300 people in the northwestern part of the state—the kind of place where everybody knows everybody.

From the time she was 5 years old, Miller knew she wanted to be a doctor. Through a child’s lens, Miller was fascinated by a doctor’s ability to restore a patient’s health. No one in her family had ever gone to college, but her parents encouraged her to follow her dreams.

They were so dedicated to this pledge they decided to have only two children to make college more affordable.  “I never felt pressure to go to college—it just always seemed like a given.”

Miller made good on the wishes of her parents. In 1981, she enrolled at the University of Miami. Her sister Michelle started college at the General Motors Institute before transferring to the University of California, Berkeley, graduating with an engineering degree. She’s now a principal at Hexagon Transportation in San Jose, California.

A biology major, Miller thrived at Miami. With a nudge from her advisor, she applied to medical school at the Johns Hopkins University School of Medicine. Her interview with Dr. James Jude, a Miami thoracic surgeon who is credited as being one of the three “fathers” of CPR, was so impressive he invited Miller to scrub in for surgery following the interview.

As a medical student at Johns Hopkins, she discovered just what kind of doctor she would be in her second year, listening to back-to-back talks on leukemia and lymphoma by pathologist Risa Mann.

“My ability to pay attention in lectures at that point topped out at about 45 minutes,” Miller said. “This one was twice as long, and I was completely captivated.”

Time in the lab of a pediatric oncologist Andrew Yeager investigating leukemia opened her eyes to the complexities and opportunities that existed for physician-scientists. “He showed me how the problems you see in patients can stimulate questions that can be investigated in the lab, and how insights in the lab can lead to clinical trials that can be tested in patients. There is an incredible synergy between those two that I just find so exciting.”

A Return to the Midwest

After medical school, her husband Jeff, with a PhD in education, accepted a position at the University of Illinois. Miller looked for a fellowship destination in the region and found IU School of Medicine.

Her aptitude for both clinical work and research made her stand out among her peers, Sledge said. She co-published papers with colleagues and made a name for herself at the school. In 1997, she served as chief fellow during her training at IU.

“As much as just about anyone I know, Kathy is the complete package,” Sledge said of Miller. “Being equally competent at research and in the clinic is not something everyone is capable of. But Kathy thrives in both settings.”

Miller points to Sledge as a mentor, but he says that title is no longer fitting.

“I certainly was her mentor at one point, but Kathy has long since surpassed that,” said Sledge, now at Stanford University. “Now, of course, she is my colleague and my friend. Kathy is flat out brilliant.”

After her fellowship, Miller and her husband moved to North Dakota, where Jeff had accepted a position. But Sledge was so keen to bring her back to IU, he made a trek out to plead his case.

“I flew up to Fargo—in theory to give a lecture at a local medical center. But mostly I was there to beg a lot,” Sledge said. “I have told people that it may be that my greatest contribution to the field of breast cancer was to haul Kathy Miller back from Fargo and get her working on clinical trials.”

As much as just about anyone I know, Kathy is the complete package. Being equally competent at research and in the clinic is not something everyone is capable of. But Kathy thrives in both settings.

Without clinical trials we would have no new cancer therapies. That means accepting that what we have right now to offer patients is the best we’ll ever have. And I can’t accept that.